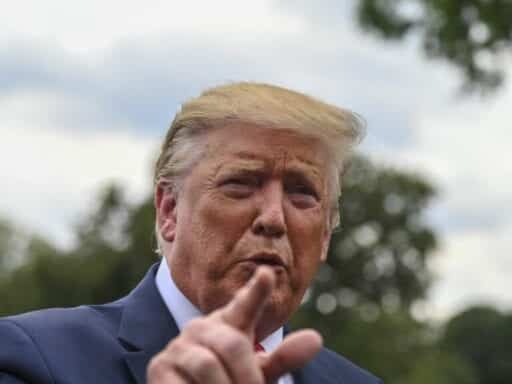 President Donald Trump has not been pleased with recent polls that show nearly all of his Democratic presidential rivals defeating him in hypothetical matchups.

Wednesday, the president accused pollsters of conspiring with Democrats against him, discounted the polls, and argued respondents had been wrongly swayed by the press. He had particular animus for an ABC News-Washington Post poll that also drew his ire earlier in the week over its findings on the president’s approval rating, referring to it as a “phony suppression poll, meant to build up their Democrat partners.”

Trump has been angry about polls with similar results for some time — in fact, in recent weeks, he has even begun to lash out at Fox News, a network he generally shows strong support for, over its polling that found voters currently prefer Democratic candidates over him.

The president responded to the recent polls by tweeting his numbers would improve once he started campaigning (although he officially kicked off his campaign in June and has held campaign-style rallies since his inauguration), and by suggesting he would get more done if he wasn’t “constantly fighting Fake News like Russia, Russia, Russia,” which is, of course, a scandal of his own creation.

While numbers can certainly be massaged to support a certain result, and while some some polls contained skewed data due to questionable methodologies — like the Rasmussen polls the president often cites — it is difficult for the work of reliable pollsters to be, as Trump claims, “phony,” given that they are merely aggregates of public opinion.

Instead of meeting these poor results head on, Trump has instead turned to his habit of attacking his usual foils. He might be better off trying to improve his standing by reminding the public of his accomplishments — which include Republican gains in the judiciary, a tax cut that benefited businesses and the wealthiest of Americans, and a fairly strong economy. Because while attacking his enemies energizes his base at rallies, it does little to remind voters sitting on the fence why they might like to cast their ballots for him.

These results have Trump arguing that the polls are rigged against him, and he claims an ABC-Washington Post poll that showed Clinton defeating him in 2016 is proof that pollsters can’t be trusted. And he claimed polling in the North Carolina Ninth District race won by Republican Dan Bishop Tuesday demonstrates the same, writing on Twitter, “Bishop down big in the Polls, WINS!”

In a hypothetical poll, done by one of the worst pollsters of them all, the Amazon Washington Post/ABC, which predicted I would lose to Crooked Hillary by 15 points (how did that work out?), Sleepy Joe, Pocahontas and virtually all others would beat me in the General Election….

….This is a phony suppression poll, meant to build up their Democrat partners. I haven’t even started campaigning yet, and am constantly fighting Fake News like Russia, Russia, Russia. Look at North Carolina last night. Dan Bishop, down big in the Polls, WINS. Easier than 2016!

Bishop, of course, was not down big in the polls. He was in a close race with Democratic candidate Dan McCready, and part of the reason the contest drew such attention (beyond it being the result of a scandal and being seen as a preview of 2020) was the fact that such a close race was being run in a long-held Republican district.

And as Vox’s Aaron Rupar has explained, ABC and the Post did not have Trump losing to Clinton by 15 points in 2016:

The final Post-ABC tracking poll before the November 2016 election found that Hillary Clinton had the support of 47 percent of likely voters, compared to 43 percent for Trump. That’s not far off from Clinton’s ultimate margin of victory in the popular vote, which was 48 percent to 46 percent. In fact, Clinton’s edge in that final poll did “not reach statistical significance, given the poll’s 2.5 percentage-point margin in sampling error around each candidate’s support,” as the Post noted in its writeup at the time. And one factor working in Trump’s favor that the Post also noted was that he was ahead in a number of battleground states.

It was difficult to foresee that Trump would lose the popular vote while winning the Electoral College. But the fact remains that although the Post-ABC polling underrepresented Trump’s support by about 3 percentage points, it pegged Clinton’s support within a point, and correctly predicted the winner of the popular vote. The poll that Trump now bashes as “inaccurate” certainly left open the possibility that he might ultimately prevail.

Recent polls do have bright spots for the president, however.

They show that he has maintained his support among Republicans broadly, with the Emerson poll showing him besting his closest Republican primary challenger by 67 points, and with a September NPR-PBS Newshour-Marist poll finding 83 percent of Republicans plan to vote for the president next year.

And the NPR poll found that while Democrats are bullish about their chances in 2020, the majority of registered voters (46 percent) believe Trump will win a second term, which is surely polling the president can get behind.

The case for more — many more — Americans, explained
Trump endorsed one of his critics. Will it be enough to help her win her runoff in Alabama?
Trump says there’s another tax cut on the way. We have no idea what he’s talking about.
The real reasons Democrats want open impeachment hearings
Politicians call for culture shifts and new laws after another mass shooting. Neither seem likely.
N.K. Jemisin’s new book begins with a virus in New York. Somehow, it’s a joyous read.