Trump is trying to out the alleged Ukraine whistleblower on Twitter 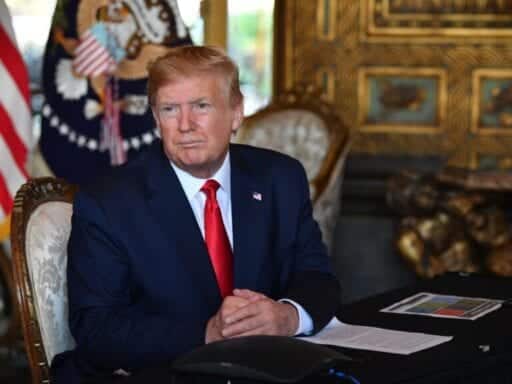 The president retweeted the name of a man conservative outlets claim is the whistleblower whose complaint set off Trump’s impeachment. That’s very worrying.

Late Friday night, President Donald Trump shared what is allegedly the name of the whistleblower whose complaint set the president’s impeachment in motion on Twitter.

That whistleblower filed a complaint about the president’s attempts to pressure Ukraine into investigating his political rivals in August. Trump responded to that complaint — and to the impeachment inquiry it spawned — by attacking the anonymous whistleblower and demanding his identity be released.

Those demands went unmet, despite Trump’s ability to order the whistleblower unmasked, but as the inquiry proceeded, some information about the anonymous official came to light, including that he is a CIA officer. Some conservative outlets began publishing the name of an official who is allegedly the whistleblower, but the whistleblower’s identity has not been verified.

Nevertheless, many of the president’s allies have worked to spread that name, and Friday Trump did so himself, retweeting a tweet by pro-Trump account containing the alleged name of the whistleblower. As of Saturday morning, that retweet was reportedly no longer visible to some users, leading CNN’s Manu Raju to report that the tweet was deleted. Some users — including at Vox — were still able to access it, however.

Trump’s tweet was a marked escalation of his recent efforts to push the public toward the alleged name of the whistleblower. On Thursday, he retweeted a tweet posted by his 2020 reelection campaign’s “war room” account, which links to an article in the Washington Examiner that names the alleged whistleblower in its headline and URL.

Several people close to the president, including his daughter Ivanka Trump and White House Counsel Pat Cipollone, have reportedly cautioned him against trying to spread the alleged name of the whistleblower, arguing that it could backfire politically. Others, like his son Donald Trump, Jr., have spread the alleged name themselves.

In retweeting the name, but not tweeting it himself, Trump has split the difference between the two factions, and has embraced a classically Trumpian rhetorical technique. By retweeting, he can formally maintain some degree of plausible deniability — it’s akin to when he says “people are saying” something and uses that language to hint that a rumor (or conspiracy theory) is true, but then declines to formally endorse it, protecting himself from accusations that he said something improper or incorrect.

These retweets come after months of the president calling for investigations into the whistleblower and attacking him as illegitimate. These claims have no provable connection to reality, and in his own tweets and retweets Saturday, one of the whistleblower’s lawyers, Mark Zaid, implored officials to “#protectthewhistleblower” and to push back against Trump’s rhetoric and tweets. Zaid also retweeted a quote the Government Accountability Project’s Irvin McCullough gave MSNBC: “To assert that anyone is the whistleblower, especially when they’re fearing for their lives, is wholly irresponsible and reckless.”

That point is one that has been made by other experts as well, who have also argued that beyond the safety of the man Trump named in his retweets, there are real fears the president’s actions will keep federal employees from speaking out about concerns of presidential misconduct in the future. While there are measures in federal law meant to negate retaliation against whistleblowers, it is not clear they apply to the president.

In the early days of the impeachment inquiry, Trump would often complain about the whistleblower’s right to anonymity, like when he tweeted in October, “Why aren’t we entitled to interview & learn everything about the Whistleblower, and also the person who gave all of the false information to him.”

In general, the reason why he — and we — aren’t entitled to this information are laws designed to protect the privacy and careers of whistleblowers.

No action constituting a reprisal, or threat of reprisal, for making such complaint or disclosing such information to the Inspector General may be taken by any employee in a position to take such actions, unless the complaint was made or the information was disclosed with the knowledge that it was false or with willful disregard for its truth or falsity.

Other regulations expand on these protections, like Presidential Policy Directive 19, which (among other things) states a whistleblower with access to classified information cannot have that access revoked in retribution for making a complaint. And the Inspector General Act of 1978 explains a whistleblower’s identity must be protected should they choose to stay anonymous (unless the inspector general’s investigation into the complaint requires it be revealed).

All of these protections are granted to a whistleblower, national security lawyer Brad Moss told Vox in the fall, as long as they “adhere to the strict parameters of what the law permits you to do, and not go beyond it.”

The whistleblower did follow the guidelines laid out in the law. Should he have done otherwise — say, by leaking his complaint to the press — Moss said, “the law cannot protect you.”

There is one issue with whistleblower law, however: It doesn’t seem to apply to the president.

“There really isn’t much to stop Donald Trump from ordering the disclosure of the identity of the whistleblower,” Moss said. “He himself is arguably beyond the scope of the legal restrictions. … Any of those normal provisions don’t really apply to the president because the president is the head of the executive branch … so it’s unlikely there’s any viable legal recourse that could be taken in that situation.”

Some news outlets have already published the name of an official believed to be the Ukraine whistleblower, and some in Trump’s circle have publicized this name. But the name appearing in conservative online publications or issuing from the mouths of the president’s children is not the same as Trump himself sharing it.

The president has 68 million followers on Twitter, and as the leader of the US, his words are watched by people all over the world. Because of this, the man whose name the president retweeted — whether he is the whistleblower or not — will arguably have a more difficult time avoiding scrutiny, particularly if Trump continues to tweet or retweet the name.

This is concerning in part because it is clear those who have alleged wrongdoing on the part of the president have faced physical violence in the past. Democrat and frequent Trump foil Rep. Ilhan Omar has spoken of a number of deaths threats she has received, for instance, and Cesar Sayoc was sentenced to 20 years in prison for mailing pipe bombs to some of Trump’s critics. The whistleblower has already reportedly faced death threats; his name being common public knowledge would only make these threats more of a danger.

Ordinarily, a president might be expected to do everything in their power to protect a whistleblower, but Trump has never been one for presidential norms. Disregarding them is a large part of how he arrived at this political moment, meaning the man whose name Trump retweeted is not at all safe from having his name shared by the president again, nor is he safe from all of the repercussions such a presidential action has.