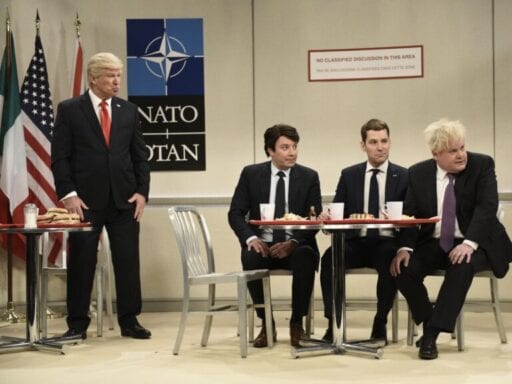 Parodying a viral video in which world leaders complain about Trump, SNL turned NATO into high school: Macron and Trudeau became bullies who won’t let Trump sit with them at lunch.

Saturday Night Live parodied that clip in its opening sketch, turning the summit into a high school cafeteria popularity contest, in which Trudeau and Macron are “bad boys” who relentlessly bully Trump, and Johnson is depicted as an awkward social climber who wants desperately to be accepted by the Canadian and French leaders.

Early in the sketch, Trump, played by Alec Baldwin, approaches a lunch table where Trudeau (played by Jimmy Fallon), Macron (played by Paul Rudd), and Johnson (played by James Corden), are seated, gossiping about Trump.

When Baldwin’s Trump asks them if the final open seat at their table is taken, Fallon’s Trudeau lies that it is.

“We would love to see you talk and chew at the same time, but we promised this seat to a friend,” Rudd’s Macron says.

“Don’t make this harder than it already is,” Corden’s Johnson replies while averting his eyes. “I’m hanging out with these guys now.”

The trio suggest that Trump sits with the president of Latvia, who is depicted as an oddball.

“Latvia seems more your speed,” Macron sneers, as the leader of Latvia, played by Alex Moffat, struggles awkwardly to play with a ball and cup toy.

As Trump heads to the other table, Johnson asks what Trump’s tie is made of.

Later on, Trudeau and Macron try to convince Johnson to throw a party at Buckingham Palace, and Trump tries to get in on it.

“Did someone say something about a party?” Trump asks while approaching the cool kids table again.

“Yes, the food is all high-quality, but small portions — it’s your nightmare,” Macron adds.

“Yeah, and you like younger women, but this party only has Macron’s wife,” Johnson says, referring to the fact that Macron’s wife is 24 years his senior.

The prime minister laughs to himself, but angers Macron and Trudeau — Trump, on the other hand, enjoys the remark, saying, “I like when it’s mean, but not about me.”

Desperate to make sure Trump doesn’t get to sit in the open seat at the table, Trudeau’s clique invites Angela Merkel, played by Kate McKinnon, to take the open seat. The nerdy Merkel is besides herself.

“Is this happening? Am I about to sit at the cool kids’ table? Just relax, Angela. Should I bring my fluegelhorn?” McKinnon’s Merkel says.

When Trump retreats back to his table with Latvia’s leader, to make way for Merkel, Johnson slaps a sign that says “IMPEACH ME!!!” on his back.

Trump then tries to cover up the fact that he’s crying over the joke by wiping his face with one of the many cheeseburgers stacked atop his plate.

“You know what you guys really are jerks okay? You’re all two-faced, and I’m not getting impeached. It’s all a sham,” Trump yells at the cool kid’s table. (In real life, when asked about the clip in which he’s being mocked, Trump called Trudeau “two-faced,” but added, “He’s a nice guy.”)

REPORTER: Have you seen the video of Prime Minster Trudeau talking about you?

The sketch concludes with Melania Trump, played by Cecily Strong, coming out and giving a public service announcement about bullying — before suggesting she is being forced to do things she does not want to do by referencing a much derided Peloton ad.

SNL explains the nation’s crush on Anthony Fauci in vaccine-focused cold open
How this chair became a pop culture icon
What Jeffrey Epstein’s case says (and doesn’t say) about human trafficking in America
The many Asian Americas
The NBA has suspended its season due to coronavirus
Should you be buying that online right now?