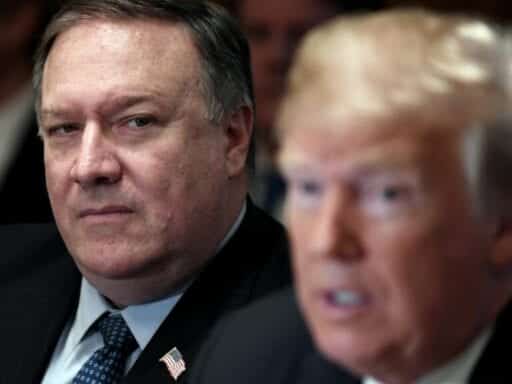 Here’s why Trump just tweeted out some newfound anger toward North Korea and China.

President Donald Trump just announced that he has canceled Secretary of State Mike Pompeo’s big upcoming trip to North Korea next week — sparking concern that nuclear negotiations are going even worse than feared and threatening to derail months of tepid progress between Washington and Pyongyang.

“I have asked Secretary of State Mike Pompeo not to go to North Korea, at this time, because I feel we are not making sufficient progress with respect to the denuclearization of the Korean Peninsula,” Trump tweeted on Friday. “In the meantime I would like to send my warmest regards and respect to Chairman Kim. I look forward to seeing him soon!”

Pompeo and his newly appointed special envoy for North Korea nuclear negotiations, Stephen Biegun, were scheduled to travel to Pyongyang next week for a fourth round of talks aimed at convincing North Korea to dismantle its nuclear program.

But Trump appears upset that little progress has been made toward that goal more than two months after he met with North Korean leader Kim Jong Un in Singapore.

Both Americans and South Koreans familiar with diplomatic negotiations have told me that the Trump administration is “disappointed” at the lack of progress made toward dismantling Pyongyang’s nuclear bombs. Trump has also reportedly bristled at the negative press coverage of the diplomatic effort.

So far, Pyongyang has repeatedly rejected Pompeo’s requests to hand over 60 to 70 percent of its nuclear warheads within six to eight months. Both sides are also stuck on signing a declaration of peace and whether Pyongyang will hand over a list detailing the size and scope of its nuclear arsenal to the Americans.

It doesn’t help that China and Russia — two countries that months ago agreed to put economic pressure on North Korea — have since relaxed those punishments. That’s allowed North Korea to escape some of the pain Trump hoped would coerce North Korea to end its nuclear program.

Still, this is the first real stumbling block for US-North Korea talks since the Singapore summit, and it’s unclear what will happen next. It’s also unclear if Biegun, whom Pompeo named as the State Department’s top North Korea negotiator on Thursday, will still go to Pyongyang without the secretary. It’s also possible that Trump’s decision may somewhat derail Kim’s summit with South Korean President Moon Jae-in next month.

Trump could reverse course; he’s done it before. In May, he abruptly canceled his summit with Kim scheduled for two weeks later, saying a meeting was “inappropriate” at the time. Then on June 1, he decided to meet with Kim after all.

But for now it’s surely a blow to Pompeo — who has struggled to get much from the North Koreans — and a rough start for Trump’s new North Korea envoy. “Not an auspicious sign for what Biegun has ahead of him,” Lindsey Ford, a former Asia security specialist at the Defense Department, told me.

What’s worse, should talks completely break down, it’s possible that Trump may consider new measures, such as harsher economic punishments — or even a military option.

The main reason talks are going badly: North Korea doesn’t want to tell the US where its bombs are hidden

Experts I spoke to said the talks have reached a stalemate. Here’s why: The US wants North Korea to declare every part of its nuclear program. That means Pyongyang would have to let Washington know how many missiles and bombs it has, as well as the locations of all of its nuclear facilities. Having an accurate list would enable the US to better monitor whether North Korea is actually dismantling its nuclear program, and how quickly it’s doing so.

The problem is that North Korea is understandably nervous about handing over such a list. If Pyongyang tells the US where all of its nuclear materials are, it makes them more vulnerable to attack. Kim’s regime, which relies in large part on its nuclear program to protect it from external aggression, would be substantially weakened if it started to destroy and dismantle its nuclear arsenal.

It’s therefore no surprise that North Korean officials have repeatedly rejected Pompeo’s request to hand over 60 to 70 percent of the country’s nuclear warheads within six to eight months. What’s more, North Korea has actually continued to develop nuclear weapons throughout the negotiating process, according to the International Atomic Energy Agency, the world’s nuclear watchdog.

So how to break the deadlock? A senior South Korean diplomat, speaking on the condition of anonymity, told me that the Kim regime is holding out for a declaration of peace on the Korean Peninsula. At this stage, it’s unlikely the US would offer to sign an official peace treaty to end the Korean War, which officially continues to this day even though fighting stopped in 1953.

The concern over signing a treaty to end the war now, experts believe, is that North Korea would request the withdrawal of America’s 28,500 troops from South Korea. A staunch US ally, South Korea relies on America’s military support to defend against the threat from Pyongyang.

Instead, the US might offer a step-by-step process where the final result is a signed peace treaty by America and other parties. If that ever happens, North Korea might offer at least a partial list of its nuclear materials as a way to build trust between the two countries. Over time, North Korea would offer to dismantle more weapons, and the US would inch closer to signing an official end to the Korean War.

It’s unclear, though, if the US is ready to make such an offer to break the stalemate, or if Pyongyang would give any concessions in exchange. In the meantime, the Trump administration already has contingency plans in place to compel Pyongyang to dismantle its nuclear program should talks continue to stall.

The Trump administration is considering more punishments for North Korea

According to a source close to the White House, administration officials have considered further measures to put economic pressure on Pyongyang.

Two proposals in particular stand out. First, the US would ask the United Nations Security Council to place a full oil and gas embargo on North Korea. And second, the US would place sanctions on multiple Chinese companies and possibly banks, since many of them help launder North Korean money.

That would significantly augment the administration’s fledgling “maximum pressure” campaign, in which the US and other countries place economic penalties on North Korea until it opts to denuclearize. That strategy has struggled lately because China and Russia continue to trade with North Korea despite restrictions they originally agreed to.

That’s why some experts don’t believe a full embargo will work. “I don’t see how a massive new round of sanctions will help the diplomacy,” Michael Fuchs, a top Asia official at the State Department from 2013 to 2016, told me.

“I also don’t see how they would ever get Russian and Chinese support for more UN sanctions while the talks are ongoing,” he added. Russia and China are two of the five countries that make up the UN Security Council, so a vote from either of them against sanctioning North Korea further would stop it from happening.

But another source familiar with negotiations told me the administration has “a list of measures like this” ready to use. It’s held off on employing them so far to see if North Korea is serious about dismantling its nuclear arsenal.

When asked to confirm internal discussions on these options, a spokesperson for the National Security Council referred me to the departments of State and Treasury. The State Department declined to answer, saying “we do not comment on internal deliberations.” The Treasury Department did not immediately respond to a request for comment.

Some experts worry that a full breakdown in diplomacy would embolden some within the White House, primarily National Security Adviser John Bolton, to push for a military strike on North Korea.

In February, two months before joining the administration, Bolton penned an op-ed in the Wall Street Journal making the case for attacking North Korea. If Trump were to accept that proposal, it could instigate one of the world’s worst wars.

It goes to show what an incredibly tough position Trump’s diplomats are in: get North Korea to completely reverse its decades-long efforts to become a nuclear power or risk Trump’s ire and potentially a catastrophic conflict.

“This is the definition of insanity: trying the same thing over and over again and expecting a different outcome,” says Fuchs. “Trump is just pulling the rug out from under his diplomats” by constantly changing his stances on North Korea, “so no matter how many trips Pompeo makes and who the US envoy is, it seems unlikely we’ll make progress until Trump gets on the same page with his own team about what the strategy is.”

This is certainly not how Biegun would’ve wanted to start

All eyes will now be on Biegun, whom Pompeo picked to be America’s new top North Korea negotiator on Thursday.

A former top executive at Ford Motor Company, Biegun is known as a serious GOP foreign policy hand, having spent time on George W. Bush’s National Security Council and in Congress as a top adviser on national security issues.

But he’s more of a European security and Russia expert than he is a North Korea hand, which has led some to question why he got the job. However, he has some experience and involvement with the National Bureau of Asian Research and the US-ASEAN Business Council.

One person familiar with the hiring process told me others in consideration for the post were Victor Cha, whom Trump first considered to be his ambassador to South Korea; Robert O’Brien, who is now the special envoy for hostage affairs; and Zalmay Khalilzad, who is rumored soon to become the special envoy to Afghanistan. Only one of them, Cha, is a bona fide North Korea expert.

A trip to Pyongyang next week would’ve been quite the test for Biegun, especially since he would have had to learn the state of negotiations and the full set of issues very quickly. It’s unclear now, though, when he will get the chance to really take the reins.

“Trump just bigfooted his own secretary of state and new envoy,” Joshua Pollack, a North Korea expert at the Middlebury Institute of International Studies, told me. “It’s back to, ‘I’m the only one who matters.’”