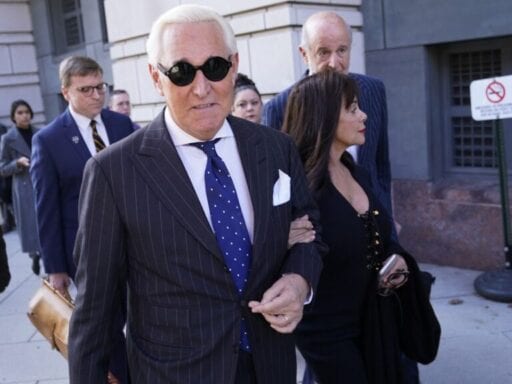 Stone was convicted for lying to Congress and witness tampering in the Mueller probe.

President Donald Trump has commuted Roger Stone’s prison sentence in a stunning exercise of presidential power that is not altogether unexpected.

Stone, a longtime Republican operative, was convicted in November 2019 for obstructing a congressional investigation, lying to Congress, and witness tampering in a trial that stemmed from special counsel Robert Mueller’s investigation into Russian interference in the 2016 election. On February 20, Stone was sentenced to 40 months in prison.

Trump’s commutation stops short of a full pardon. The conviction will remain on Stone’s record — for now, at least. But the Trump ally won’t have to serve his approximately 3 year prison term.

Trump has long disdained the Mueller investigation and claimed it has unfairly targeted him and his associates — not just Stone, but his former campaign chair Paul Manafort and former National Security Adviser Michael Flynn. Trump and his attorneys dangled pardons during the Russia investigation.

With Stone, Trump himself has finally gone beyond complaining to explicitly intervening to erase his associates’ convictions.

Trump repeatedly signaled that he would grant clemency to Stone, it’s the most definitive example yet of him using the power of the presidency to protect his friends or advance his interests, Jim Pfiffner, a professor at George Mason University, said. “A willingness to use the pardon power to protect his friends and supporters sends a signal to others who might be willing to break the law in support of the president,” Pfiffner wrote in an email.

The controversy leading up to Stone’s commutation

Prosecutors made the case that Stone obstructed the House Intelligence Committee’s investigation of Russian interference in the 2016 election by lying to the committee about his attempts to contact WikiLeaks, and by intimidating and trying to get another witness to lie for him about those efforts.

During the trial, witnesses such as Rick Gates (a Manafort associate who pleaded guilty in the Mueller probe and cooperated with prosecutors) and Steve Bannon testified that Stone claimed to the campaign that he had inside information about WikiLeaks’s access to damaging information about Hillary Clinton, which Mueller’s investigation found was obtained through hacking by Russian military intelligence.

Prosecutors did not actually prove that Stone had any inside information during the trial. But, as Vox’s Andrew Prokop has written, prosecutors during the trial argued that “Stone’s motivation for his lies and obstruction was that ‘the truth looked bad for Donald Trump.’”

So maybe it’s not surprise that Trump has closely followed this case — and appeared to publicly pressure the Justice Department to lessen his sentence. In February, as Stone’s sentencing date approached, federal prosecutors recommended that Stone serve between 87 and 108 months (about seven to nine years) in prison — a range prosecutors said adhered to federal guidelines and “would accurately reflect the seriousness of his crimes and promote respect for the law.”

But not according to Trump. “This is a horrible and very unfair situation,” the president tweeted early Tuesday morning. “The real crimes were on the other side, as nothing happens to them. Cannot allow this miscarriage of justice!”

Later that same day, the Justice Department began signaling that it would intervene, with an anonymous official suggesting that was not the sentence recommendation that had been briefed to the department. Things escalated from there, as four prosecutors handling the case abruptly withdrew their involvement.

Aaron Zelinsky, who worked on Mueller’s team, filed a memo withdrawing himself from the case. Next came prosecutor Jonathan Kravis, who said he was leaving the team because he had resigned as an assistant US attorney. Two more followed: Adam Jed and Michael Marando said they would also remove themselves from the case.

The mass exodus came as the Justice Department submitted a February 11 memo in the Stone case that said its first sentencing memo did “not accurately reflect the Department of Justice’s position on what would be a reasonable sentence in this matter.”

The document said the DOJ believes “incarceration is warranted” but that 87 to 108 months isn’t appropriate and doesn’t “serve the interests of justice in the case.”

If this all gave the impression that the Justice Department had caved to pressure from Trump, and that prosecutors resigned in protest of this interference, well, Trump has done little to dispel that troubling notion.

“Congratulations to Attorney General Bill Barr for taking charge of a case that was totally out of control and perhaps should not have even been brought,” Trump tweeted. He went on to claim the “Mueller Scam” was improperly brought. That’s a wholesale mischaracterization of the inspector general’s report on the Russia investigation, which said the case was appropriately predicated. Mueller took over the Russia investigation almost a year after the FBI had opened it, and there’s no evidence the former FBI director lied to Congress.

Congratulations to Attorney General Bill Barr for taking charge of a case that was totally out of control and perhaps should not have even been brought. Evidence now clearly shows that the Mueller Scam was improperly brought & tainted. Even Bob Mueller lied to Congress!

Many months later, Zelinsky also told the House Judiciary Committee in June that political interference played a role in Stone’s sentencing. “What I heard — repeatedly — was that Roger Stone was being treated differently from any other defendant because of his relationship to the president,” he testified.

Ultimately, Judge Amy Berman Jackson sentenced him to 40 months (about three years) in prison for his conviction. It ended up falling below the sentencing guideline recommendations, but then again, that could have happened anyway — it was always up to the judge.

Now that Trump has granted Stone a commutation, the sentence doesn’t matter so much. It also puts Barr’s apparent intervention on Stone’s behalf in an even more unforgiving light — a sign that all along, this was about trying to help the president’s cronies.

A president’s use of clemency also can’t be thought of in isolation. “They have to be thought of alongside all of the other mechanisms for presidential enforcement or non-enforcement of different laws,” Bernadette Meyler, a law professor at Stanford University, told me. The commutation is the last step in a troublesome list of interventions.

Will Trump face any fallout for this?

Trump’s commutation of Stone’s sentence is, at the most basic level, constitutional. The president does have essentially unchecked power when it comes to granting clemency for federal crimes. That does not mean it’s wise. This could very well be a precarious moment in Trump’s presidency, especially as his administration faces pressure for his handling of the coronavirus and nationwide protests against police brutality.

Trump isn’t the first president to use his clemency power controversially, of course. George H.W. Bush pardoned those caught up in the Iran-Contra scandal, which implicated Bush himself. Bill Clinton’s pardon of financier Marc Rich also raised questions of influence peddling, specifically whether Clinton had rewarded a prominent donor, leading to a congressional investigation. And in 2007, George W. Bush commuted the sentence of former White House aide Scooter Libby for perjury and obstruction of justice.

But both of those examples came in the final weeks and days of the presidents’ terms in office; they were leaving the presidency for good, which dulled the political fallout. Trump took this risky move months before he’s up for reelection for a second term. At the same time, Trump didn’t fully absolve Stone, and only erased his sentence, which might have been an attempt to dull the political impact.

Either way, the only real check on Trump’s pardon power is political — whether voters reject his actions, or Congress investigates and denounces it. That includes Republicans, too.

Experts told me the founders very much worried that the pardon power could be abused by presidents. They saw impeachment as a possible check on this. Trump already has one impeachment under his belt, and it proved that his defenders in Congress are simply unwilling to break with him.

And Trump already has handful of controversial pardons on his list, too, including a string of recent ones for former politicians and businessman all doing corrupt things.

Mark Osler, a law professor at University of St. Thomas and a former federal prosecutor, said past presidents have used their pardon powers in a principled way, even when it was unpopular, such as President Gerald Ford’s decision to grant amnesty to Vietnam draft dodgers. They can also use it to signal what they value, like President Barack Obama’s use of clemency for nonviolent drug offenders. But Trump has largely used his pardon power to forgive others who felt unfairly accused, to benefit popular right-wing figures, and to reward and benefit his friends — and Stone, a longtime and faithful associate of the president, fits right in.

“With President Trump, in the 2016 election, we all knew how much he valued loyalty,” Osler said. “And it was completely predictable how he would use clemency.

The question with Stone’s commutation is whether Trump feels emboldened enough to lessen or wipe out the convictions of others implicated in the Mueller probe, separate and apart from his Justice Department.

For his detractors, it will be an alarming breach of the rule of law and another norm shattered. But for Trump and his supporters, this will be yet another triumphant assault on the “Russia hoax.”

What a second Trump term could mean for LGBTQ people
Canada imposes strict entry restrictions to slow coronavirus spread
Fall TV is here, Covid-19 and all
Watch: The Vox Book Club tackles The Princess Bride in a critics roundtable
There’s another royal wedding coming up: Princess Eugenie’s
Here’s the finalized lineup for the third democratic debate