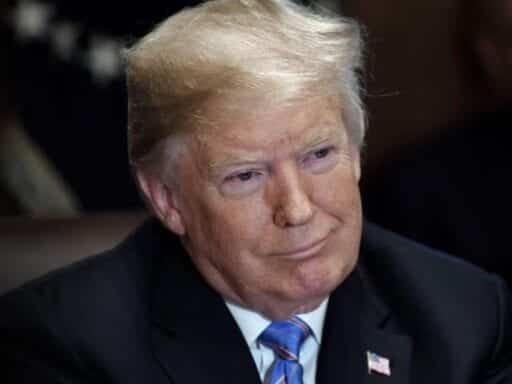 Trump responded “no” when asked if he thought Russia was still targeting the United States.

On Wednesday, a reporter asked President Donald Trump if thought Russia was still targeting the United States. He responded with a terse, but clear, answer: “No.”

The president’s response openly and directly contradicts the repeated statements of his spy chief and other top national security officials — and raises the question of how seriously Trump believes the conclusions of his own intelligence agencies.

For example, Daniel Coats, the director of national intelligence, has warned Trump and the American people for months that Russia not only interfered in the 2016 election but also plans to do so again this year.

“There should be no doubt that Russia perceives that its past efforts have been successful and views the 2018 midterm US elections as a potential target for Russian influence operations,” Coats told the Senate Intelligence Committee in February. “Frankly, the United States is under attack.”

“The digital infrastructure that serves this country is literally under attack” by Russia, China, Iran, North Korea, and other hostile foreign countries, Coats said at an event hosted by the conservative Hudson Institute think tank in Washington, DC. “The warning lights are blinking red again.”

Is Russia still targeting the US? Trump says, “No.” pic.twitter.com/L5ZY9DE4r1

But in Finland, Trump sided with Putin over his intelligence chief after the Russian leader denied his country meddled in the 2016 US presidential election.

“My people came to me, Dan Coats came to me and some others, and said they think it’s Russia. I have President Putin; he just said it’s not Russia. I will say this. I don’t see any reason why it would be,” Trump told reporters in Helsinki, where the summit took place.

That led Coats to publicly rebuke the president — a rare thing for a sitting intelligence official to do — by noting that the intelligence and law enforcement community, which in this case includes the CIA, FBI, and NSA, has “been clear in our assessments of Russian meddling in the 2016 election and their ongoing, pervasive efforts to undermine our democracy.”

Twenty-four hours later, the president reversed course, haltingly asserting that he had “full faith and support for America’s great intelligence agencies” and that he “accepted” US intelligence’s findings that Russia was behind cyberattacks leading up to the election.

But now it seems Trump has changed his mind again.

It’s yet another stunning moment in the president’s continuing battle against America’s spy agencies, who he once likened to Nazis because he believed they leaked information about him. The president also spent part of his first full day in office at a memorial for the CIA’s fallen heroes attacking the media and lying about the size of his crowd at his inauguration.

What’s more troubling is that no matter what they say or do, Coats and others can’t seem to get Trump to listen to them. But the fact that Putin — the head of the country responsible for continued attacks on the US — seems to have Trump’s ear is the scariest thing of all.

Stephen Moore is not worried about his Fed board confirmation
Vox Sentences: Two federal departments for the price of one?
7 key moments from Amy Coney Barrett’s Supreme Court hearing
3 ways to ensure that rogue cops aren’t above the law
Remdesivir receives emergency approval as a Covid-19 treatment
A new lawsuit describes a violent gang in LA County. Its members are deputy sheriffs.