Trump just debuted his 3 main defenses against the Ukraine scandal 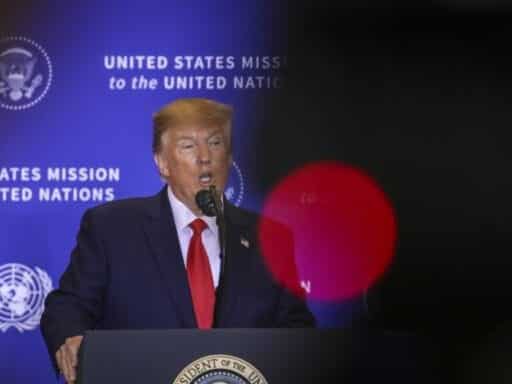 One strategy is mocking Democrats: “We can’t beat him. Let’s impeach him.”

At a press conference on Wednesday, President Donald Trump addressed questions about the Ukraine scandal that has threatened his presidency.

And although the White House had just hours before released a readout of a phone call clearly showing that Trump had pushed Ukraine’s president to investigate Joe Biden, Trump remained adamant that he did nothing wrong and that impeaching him over this would be politically motivated.

First, he effectively said that his victory in 2016 means he can do whatever he wants. Second, he argued that it was actually Senate Democrats who improperly tried to coerce the Ukrainian president last year (they didn’t, but more on this in a bit). Third, he asserted that Democrats are only pursuing impeachment because they believe they can’t beat him at the ballot box in 2020.

His remarks were devoid of the typical fiery theatrics one expects from Trump when he feels he’s being attacked, causing some to question whether he’s actually started to feel the strain of the growing impeachment push. (It could also be that he’s tired after three straight days of meetings with world leaders at the United Nations.)

But even so, it seems he’s begun to coalesce around three distinct lines of defense that will serve as the main pillars of the strategy to save his presidency.

Asked why the American people should feel comfortable with a president who asks foreign leaders to investigate US citizens, Trump evaded the question. Instead, he spoke of his 2016 election victory against Hillary Clinton.

“Far more people came to vote than anybody thought possible,” he said. “I can’t help it that my opponent didn’t go to Wisconsin and should have gone much more to Michigan and Pennsylvania and other places. But that is the way it is. We won an election convincingly. Convincingly.

“The millions of people out there that are looking at what is going on, those people understand it. They see it. And they think it is disgusting,” he continued.

It’s true that Trump often reverts to free association when he’s faced with a tough question but in this case where his mind went is pretty indicative of his views. He won an election against corrupt opponents, his thinking goes, and he has millions of supporters who want him to keep doing what he’s doing.

Which means that as long as Trump has popular support — or at least believes he has it — he’s unlikely to change his behavior or repent for his actions.

Defense 2: The Democrats pressured Ukraine, not me

Trump is in trouble for having tried to convince Ukrainian President Volodymyr Zelensky to open an investigation into Joe Biden and his family. But that’s not the real story, Trump says. No, the real story is that Senate Democrats sent a letter to Ukraine’s then-general prosecutor last year.

“Senators Robert Menendez and Richard Durbin and others wrote a letter to the prosecutor general expressing concern at the closing of four investigations they said were critical,” Trump said. “In the letter they implied that their support for US assistance to Ukraine was at stake. And that if they didn’t do the right thing, they wouldn’t get any assistance. Doesn’t that sound familiar?”

He’s referring to a May 2018 letter Democratic Sens. Menendez, Durbin, and Patrick Leahy sent to Yuriy Lutsenko. In it, they expressed their concerns that Ukraine had stopped cooperating with special counsel Robert Mueller’s investigation because the government feared it wouldn’t receive missiles from the United States.

The senators didn’t like that. “We strongly encourage you to reverse course and halt any efforts to impede cooperation with this important investigation,” they wrote. “Blocking cooperation with the Mueller probe potentially cuts off a significant opportunity for Ukrainian law enforcement to conduct a more thorough inquiry into possible crimes committed during the Yanukovych era.”

But nowhere in the letter do the lawmakers say that iUkraine must reopen the cases or risk losing their economic assistance from the US. If anything, the letter reads like a reasonable request to get Kyiv to continue to work with Mueller. There’s just no pressure there.

Defense 3: Democrats think they’re going to lose in 2020 and are desperate

If Trump is good at one thing, it’s rallying his supporters with pithy, all-encapsulating turns of phrase. He came up with another during the press conference.

One could imagine Trump continuing to use this little quip to ensure his supporters rush to the polls in November 2020 to fend off a Democratic witch hunt. It’ll also play well on cable TV — Trump’s favorite medium — because it quickly conveys the message to his base that what’s happening to him is nothing more than dirty politcs.

In a sense, Trump has a whole new bumper sticker motto. Expect to hear much more of it in the weeks to come.

The misunderstood Rust Belt worker vote, and its importance in 2020, explained
The FBI just fired Peter Strzok
How “kombucha girl” revolutionized internet fame
Why are so many brands pivoting to coziness?
I’m an epidemiologist and a dad. Here’s why I think schools should reopen.
Tom Steyer’s foreign policy plan: Just do whatever Obama did