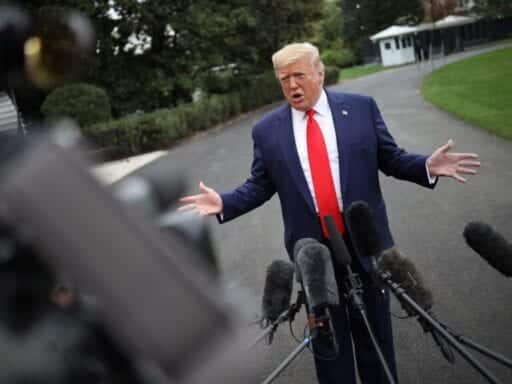 He’s just doing the impeachable conduct in public. Will he get away with it?

President Donald Trump just did what Democrats seeking his impeachment are accusing him of doing, this time on camera: He called for Ukraine to investigate political rival Joe Biden and his son Hunter.

In fact, he escalated it — demanding that China investigate the Bidens as well.

The diatribe, delivered in Thursday comments to reporters at the White House, begins after a reporter asks Trump what he wanted Ukrainian President Volodymyr Zelensky to do after their now-infamous July 25 phone call. In response, the president reiterates his demand for Ukraine to investigate the Bidens — and tacks on a request for the Chinese government to do the same:

The Ukraine stuff alone here is terrible for Trump. The White House has claimed that the call to Ukraine was about expressing concerns about corruption there; now Trump seems to be openly admitting that his call is really just about his desire for the Ukrainians to go after Biden.

But the China thing takes it to a whole new level.

It’s a reference to Trump’s false belief that Hunter Biden made $1.5 billion from Chinese interests after going on a trip to the country with his father. It’s a theory that has its origins in the conservative press fever swamp, but one that Trump seems to believe pretty firmly.

A reporter then followed up on Trump’s China comments by asking him whether he made a private request to Chinese President Xi Jinping to open a Biden investigation in the way that he has with Zelensky. Trump essentially says it’s a good idea.

“It’s certainly something we can start thinking about, because I’m sure that President Xi does not like being under that kind of scrutiny where billions of dollars [are] taken out of his country,” Trump says.

It’s not clear what “that kind of scrutiny” means, or whether this is some kind of veiled threat to disrupt Chinese business dealings if the country doesn’t investigate Biden. That read is possible in context of other comments Trump made this morning about trade negotiations:

Trump at 10:37:24 a.m., talking about trade negotiations: “I have a lot of options on China, but if they don’t do what we want, we have tremendous power.”

Trump at 10:37:54 a.m., asked about Ukraine probe: “Likewise, China should start an investigation into the Bidens.”

Regardless of what Trump meant by “scrutiny,” though, what’s undeniable is that he is openly encouraging not one, but two, foreign leaders to open investigations into one of his chief political rivals in the 2020 election.

This calls back to Trump’s infamous comment from 2016 soliciting Russian interference — “Russia, if you’re listening, I hope you’re able to find the 30,000 emails that are missing” — but it’s actually considerably worse.

The core of the argument for impeachment is that Trump is inappropriately wielding the power of the presidency to solicit foreign interference in the 2020 election. That is literally what he did Thursday, with not one but two different foreign leaders, on camera and in front of reporters.

The president’s theory seems to be that he can get away with this if he’s brazen enough because it won’t generate the same level of outrage as if it’s done in secret and covered up.

He’s run this playbook before with some success — like the time he admitted in a televised interview that he fired FBI Director James Comey to stymie the Russia investigation and then got away with it. Maybe this time will be different.

The Trump admin has cooked up a new plan to bring back preexisting conditions
Why major food and hotel chains are getting stimulus money meant for small businesses
Trump just upended a massive coronavirus package negotiated by his own administration
Trump’s DOJ asks the Supreme Court to strip health care from 23 million people
The jarring contrast between Trump and Biden, in 3 moments from their competing town halls
The evidence for using hydroxychloroquine to treat Covid-19 is flimsy