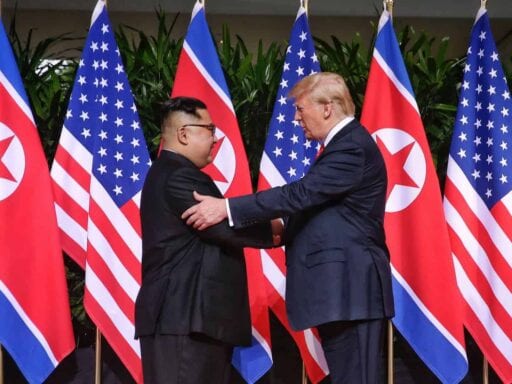 It’s confusing, though, because there doesn’t seem to be much to brag about.

The letter, dated July 6, does contain a warm message from Kim. “I firmly believe that the strong will, sincere efforts and unique approach of myself and Your Excellency Mr. president aimed at opening up a new future between the DPRK and the U.S. will surely come to fruition,” Kim wrote, using the acronym for the country’s official name, the Democratic People’s Republic of Korea.

Trump tweeted that Kim’s message was “a very nice note” and bragged that there was “Great progress being made!”

But recent events seem to indicate otherwise — and actions, they say, speak louder than words.

Take what happened in just the last week. Secretary of State Mike Pompeo traveled to Pyongyang on Saturday for the third time to continue talks about dismantling North Korea’s nuclear program. Pompeo went, in part, because North Korea promised him a meeting with Kim. But Kim never showed, opting to visit a potato farm instead.

A very nice note from Chairman Kim of North Korea. Great progress being made! pic.twitter.com/6NI6AqL0xt

People familiar with Pompeo’s discussion with the North Korean politician who did show, top official Kim Yong Chol, said the North Koreans “were just messing around” and “not serious about moving forward.” The meeting went “as badly as it could have gone,” the source told CNN on Wednesday.

That’s not all. It turns out the North Koreans didn’t even show up for a meeting with US and UN officials on Thursday at the inter-Korean border.

They had planned to discuss returning the remains of US troops killed in the Korean War, but the North Koreans never arrived. They also didn’t call or explain their absence. The repatriation of these remains was supposed to be one of the positive outcomes of the Trump-Kim summit in Singapore last month.

Harry Kazianis, a North Korea expert at the Center for the National Interest think tank, thinks these events and the letter itself are a bad sign — regardless of what Trump is saying.

“There is no mention of America’s main goal: North Korean nuclear disarmament,” he told me. “Washington and Pyongyang are talking past each other, and that is dangerous. This letter is just more proof of the problem.”

US-North Korea talks are faltering. That was always likely to happen.

When Trump and Kim met in June, they signed an agreement over North Korea’s nuclear program. But a month later they still can’t agree about what they signed.

At a rally in Duluth, Minnesota, on June 20, Trump said that he had convinced North Korea’s dictator to completely give up his nuclear arsenal: “Sentence one says ‘a total denuclearization of North Korea,’” Trump said. “There will be denuclearization. So that’s the real story.”

But South Korea doesn’t actually have its own nukes. What it does have, though, is what’s called the US “nuclear umbrella.” That basically means that the United States promises to defend South Korea from the North — even with the use of US nuclear weapons. There are 28,500 US troops now stationed in South Korea to defend it from potential aggression from the North.

So what North Korea is essentially saying here is “Sure, we’ll give up our nukes. Just as soon as you withdraw all US military support for South Korea.” Pull your troops out of the country. Stop promising to protect it.

Trump’s team doesn’t seem to understand that, though, and it’s angered North Korea.

After last Saturday’s meeting, Pyongyang blasted Pompeo and the Trump administration for advancing a “unilateral and gangster-like demand for denuclearization.” The next day Pompeo pushed back on the broadside, saying if North Korea is right, then “the world is a gangster” because the international community wants North Korea to be without nuclear weapons.

So based on the last week, it’s safe to say the nuclear negotiations have reached a near-intractable stalemate. It’s unlikely that a friendly letter will fix that anytime soon.

The government officials who wrote the tax bill have new jobs as lobbyists
Jeff Bezos says Amazon is writing its own facial recognition laws to pitch to lawmakers
The NBA might be returning this summer — in Disney World
The keto moment
400,000 cases later, Trump defends his February claim that the coronavirus was going away on its own
Biden’s border policies are under scrutiny. His administration is racing to find solutions.