Trump just offered one of the boldest lies of his presidency 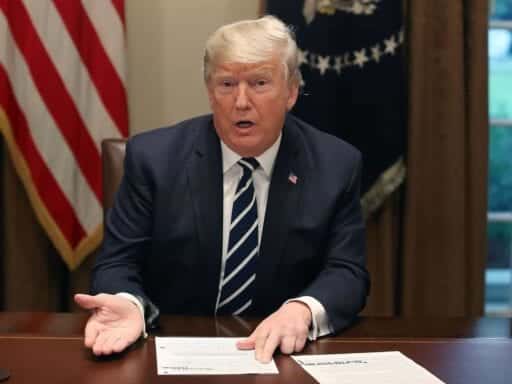 Trump on Russia and 2016: You gonna believe me or your lying ears?

Trump just issued what was arguably the most bald-faced lie of his entire presidency — and that’s saying something.

Following massive bipartisan condemnation of Trump’s disastrous press conference with Russian President Vladimir Putin in Helsinki, in which he questioned whether Russia was responsible for the hack of the 2016 US election, Trump held a surprise press appearance on Tuesday afternoon to try to walk back his comments.

Sitting at a table in the White House with members of Congress, Trump read directly off a sheet of paper that had clearly been prepared by his advisers. In halting speech, he asserted that he had “full faith and support for America’s great intelligence agencies” and that he “accepted” US intelligence’s findings that Russia hacked the election.

That might be plausible in theory, but if you look at the actual context of what Trump said it makes no sense, and it’s very clear that Trump was was expressing skepticism about Russia’s guilt. Here’s the key sentence, in italics, surrounded by context:

My people came to me, Dan Coats came to me and some others and said they think it’s Russia. I have President Putin. He just said it’s not Russia. I will say this. I don’t see any reason why it would be, but I really do want to see the server. But I have confidence in both parties…I think it’s a disgrace that we can’t get Hillary Clinton’s 33,000 emails.

So I have great confidence in my intelligence people, but I will tell you that president Putin was extremely strong and powerful in his denial today. And what he did is an incredible offer. He offered to have the people working on the case come and work with their investigators, with respect to the 12 people [Russian agents indicted by Special Counsel Robert Mueller for election interference]. I think that’s an incredible offer.

He’s saying, clearly, that there’s a conflict between US intelligence and Russian claims, that he’s not sure who’s right, and he would appreciate Russian intelligence’s help in clearing up what happened.

This isn’t an issue of one skeptical word that would have been misspoken, but an entire block of words obviously expressing skepticism about Putin and Russia’s guilt.

What’s more, in Trump’s alleged walkback on Tuesday afternoon, he still ended up reiterating his skepticism. When Trump said “I accept our intelligence community’s conclusion that Russia’s meddling in the 2016 election took place,” he immediately followed it up by saying “could be other people also. A lot of people out there.” He clearly doesn’t believe that Russia did. He just doesn’t, and is trying to convince us that he didn’t mean what he said.

This has happened before. As the Toronto Star Daniel Dale notes, a similar thing happened after Trump’s infamous statement expressing sympathy with the Charlottesville white supremacist marchers, where he read a prepared statement that directed contradicted his ad-libbed, more sincere comments:

Let’s not dance around this: Trump is trying to gaslight the entire world, to assert that he said something he clearly didn’t by sheer force of confident assertion. The president is lying to us, he’s doing it brazenly, and we shouldn’t let him get away with it.

How DNC Chair Tom Perez plans to avoid the chaos of the GOP’s 2016 debates
5 lessons on social distancing from the 1918 Spanish flu pandemic
How risky is air travel in the pandemic? Here’s what the science says.
Actor Kirk Douglas has died at the age of 103
Vox Sentences: Only 800,000 can prevent forest fires
Trump and Barr have been urging foreign governments to help them investigate the Mueller probe’s ori...