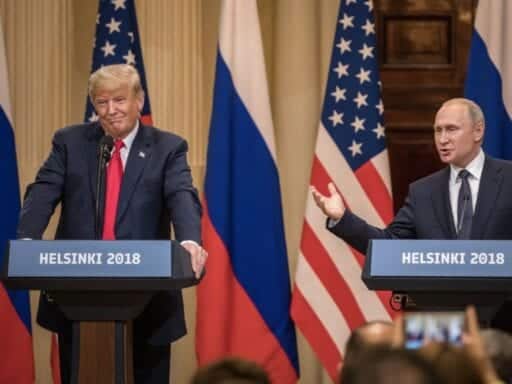 This is quite the turnaround for the president, who consistently denies Russia interfered in the 2016 election.

President Donald Trump has just signed an executive order to automatically sanction foreigners who interfere in US elections. It’s one of the administration’s strongest moves yet to protect the integrity of the American vote against external meddling.

The new measure creates a formal process for the US government to determine if an individual, group, or country purposely aimed to meddle in America’s democratic process, National Security Adviser John Bolton and Director of National Intelligence Dan Coats told reporters on Wednesday.

“The executive order is not country-specific,” Bolton said. “Threats to the integrity of the election process come from a number of sources.”

In other words, the administration is targeting not just Russia but anybody who wants to try to alter the election’s outcome.

The new process works like this: The intelligence community, through the Office of the Director of National Intelligence, has 45 days after the 2018 midterm election to determine if a new piece information shows there’s a foreign effort to interfere in it. That could include foreigners hacking into voting machines or spreading propaganda online — like on social media — to change public opinion.

At that point, the intelligence community hands that information over to the departments of Justice and Homeland Security. The attorney general, the homeland security secretary, and others then have their own 45 days to determine if that evidence clearly shows an attempt to meddle. If so, that triggers the automatic sanctions to freeze the assets of the specific culprit(s).

Beyond that, the president, State Department, and Department of the Treasury may decide to add additional sanctions, depending on the severity of the interference attempt.

Coats noted that the US has seen efforts by Russia, China, Iran, and North Korea to meddle in the US midterms, but not at the level seen during the 2016 presidential election.

Is this a Trump turnaround?

Signing the order — which the administration had been drafting for months — is quite the turnaround for Trump. He’s consistently denied that Russia interfered in the election two years ago and favored his candidacy over Hillary Clinton’s, and he’s opposed congressional efforts to impose stricter sanctions on the Kremlin.

Bolton, though, said the order “demonstrate[s] that the president cares deeply about this issue.”

It’ll be interesting to see if the administration determines Russia has meddled in this year’s election through the new automatic sanctions process. If that’s the case, all eyes will be on Trump to see if he authorizes additional measures on Moscow despite his overly friendly relationship with Russian President Vladimir Putin.

Trump has repeatedly attacked the NFL. That hasn’t stopped players from protesting.
10 facts about school reopenings in the Covid-19 pandemic
North Carolina Republicans’ audacious power play, explained
The state of the 2020 Democratic primary
Tomi Lahren now has an athleisure line
Democratic Governor John Bel Edwards hangs on to his seat in Louisiana