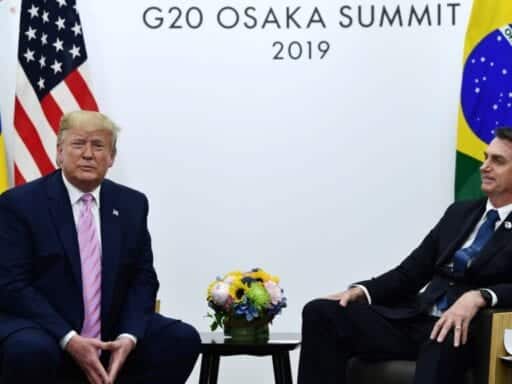 The president announced steel and aluminum tariffs on Monday.

President Donald Trump returned from the long Thanksgiving weekend ready to open up a new front in his trade war.

On Monday, Trump announced on Twitter that the US would impose steel and aluminum tariffs on Brazil and Argentina in response to what the president described as the countries’ “massive devaluation of their currencies, which is not good for our farmers.”

“Therefore, effective immediately, I will restore the Tariffs on all Steel & Aluminum that is shipped into the U.S. from those countries,” Trump said, adding that he wished the US Federal Reserve should act so “that countries, of which there are many, no longer take advantage of our strong dollar by further devaluing their currencies.”

Though the self-proclaimed “Tariff Man” favors protectionist policies, the president’s decision to ramp up his trade feud is somewhat unexpected. In the spring of 2018, the Trump administration placed tariffs of 25 percent on steel and 10 percent on aluminum on a slew of trading partners, including the European Union, Mexico, and Canada. (They’ve since been removed on Canada and Mexico as part of the USMCA deal.)

Initially, the Trump administration had also threatened other trading partners — including Brazil and Argentina — with those same tariffs, but ultimately struck a last-minute deal to avoid those duties. The administration limited steel and aluminum imports through quotas instead.

Still, according to CNN, after Canada, Brazil supplied the most steel to the US in the beginning of 2019. Last year, Brazilian steel exports to the US added up to $2.6 billion. Argentina isn’t as big a supplier, with just $700 million, per the Washington Post.

But now Trump wants to revisit tariffs, though his reasoning is confusing — and the push seems to have caught the new recipients of Trump’s trade ire off guard.

Trump wants to put tariffs on Brazil and Argentina. But why now?

Trump in his tweet accused Brazil and Argentina of a “massive devaluation” of their currencies.

But both Brazil and Argentina are dealing with their own economic woes. In Argentina, the right-leaning (and soon to be outgoing) Mauricio Macri administration has battled a financial crisis, including struggling to control the falling peso.

Brazil’s own currency has suffered recently, and what’s going in Argentina is partly to blame. At least according to Trump’s own Treasury Department, as of May, neither Brazil nor Argentina are on the watch list of countries requiring closer attention to their currency practices. Which means Trump’s tariffs could put more pressure on those South American economies, and their currencies.

Brazil and Argentina have both been sort of winners in Trump’s trade war with China. Brazil is now the top soybean supplier to China. Argentina also struck a deal to export soymeal (basically, animal feed) to China. But given the volatility of the China-US negotiations, and the pressure it’s putting on the global economy, it’s not clear how deep or long term such gains will end up being for either country.

Meanwhile, the politics of Trump’s announcement are a bit strange. Brazil’s new right-wing populist president Jair Bolsonaro has strengthened the country’s relationship with the like-minded Trump administration, and Trump had previously talked up a possible US-Brazil free trade deal. Just last week, Brazil’s economy minister, Paul Guedes, had a bunch of meetings with US trade officials, including Secretary of the Treasury Steve Mnuchin. Ahead of those meetings, Guedes said Washington liked the right-wing Bolsonaro administration’s economic policies.

Responding to Trump’s tweet Monday, Bolsonaro said had an “open channel” with Trump and that he’d call him to talk it out.

“I’m going to call him so that he doesn’t penalize us,” Bolsonaro said Monday, according to Reuters.

“Our economy basically comes from commodities, it’s what we’ve got,” the Brazilian president added. “I hope that he understands and that he doesn’t penalize us with this, and I’m almost certain he’ll listen to us.”

Argentina, meanwhile, is currently undergoing a political transition; its right-leaning President Macri is leaving office, to be replaced by the left-leaning Alberto Fernández on December 10.

So Trump’s announcement definitely arrives at a bad time for both Brazil’s relatively new president — especially since Bolsonaro touted closer ties with the US as a selling point — and Argentina’s incoming administration.

It also comes at an odd time for Trump himself, as the president is trying to resolve the long-running trade dispute with China.

The US and China said they’d reached “phase one” of a trade deal in October, but the terms are still fuzzy and the agreement still hasn’t been formally inked. It’s not even clear if it will happen before the end of the year, and the Hong Kong protests may have recently strained relations even more.

Specifically, Trump signed a Hong Kong human rights legislation that overwhelmingly passed Congress, and Beijing is really angry about it. President Xi Jinping sees Hong Kong as an internal matter (Chinese propaganda has blamed the CIA and other Western institutions for fomenting the unrest), and Washington’s move as meddling in the country’s internal affairs. In response, the Chinese government has banned US military visits to Hong Kong and has sanctioned some US-based non-profits in the United States, which it accuses of fomenting the Hong Kong uprising.

The US is set to put an additional $156 billion in tariffs on Chinese goods on December 15, which would mean basically anything coming from China will be taxed. Trump said Monday that he’s “very happy where we are and frankly I could be other places that I could do all by myself and be even happier … but the Chinese want to make a deal.” Whatever that means, it doesn’t shed all that much light on where Chinese-US trade talks stand.

But Trump’s trade war with China has hurt some US manufacturers and farmers. More broadly, the US-China spat has rattled the entire global economy. And, of course, Trump is still waging a trade battle with the EU (though some of the tariffs were approved by the World Trade Organization). He has yet to get his revised NAFTA deal through Congress, though there’s still hope there. And now, Trump is entering the 2020 election year adding even more volatility to America’s trade situation by targeting Brazil and Argentina.

A one-page, printable guide for preparing to shelter at home
Why video games aren’t causing America’s gun problem, in one chart
Coronavirus and the 2020 election: a collapsing economy is a disaster for the incumbent
Scientists are identifying potential treatments for coronavirus via artificial intelligence
Study: Trump rallies may be responsible for an estimated 700 Covid-19 deaths
Is Trump guilty of obstructing Congress? I asked a legal expert.