Trump just used a damaged DC church for a photo op. The bishop is furious. 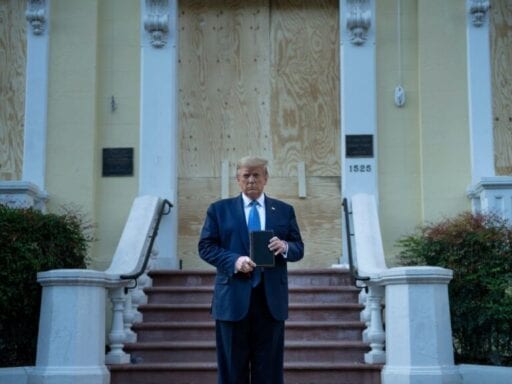 President Donald Trump holds a Bible while visiting St. John’s Church across from the White House after the area was cleared of people protesting the death of George Floyd by police and tear gas. | Brendan Smialowski/AFP via Getty Images

Law enforcement used tear gas and rubber bullets on peaceful protesters so that Trump could have his photo op.

The Right Rev. Mariann Budde, the Episcopal bishop for Washington, DC, condemned President Trump shortly after law enforcement officers used tear gas and rubber bullets to disperse a peaceful protest — all so that Trump could have a photo op in front of a church.

Sunday night, as large groups of peaceful protesters and much smaller groups of less peaceful demonstrators filled the streets of DC, a fire was set in the basement of St. John’s Church, an Episcopal church located near the White House. The fire was extinguished, and the church reportedly suffered only minor damage.

Nevertheless, Trump decided to visit the church Monday evening and stand outside it while holding a Bible. Shortly before this visit, he delivered a brief address that quickly slipped into authoritarian rhetoric. “If a city or state refuses to take the actions necessary to defend the life and property of their residents,” Trump proclaimed, “then I will deploy the United States military and quickly solve the problem for them.”

Around the same time that Trump began this address, protesters were peacefully gathered in Lafayette Park near the White House. But they were cleared out of the park by federal law enforcement officers, who used tear gas and rubber bullets to remove the crowd.

Several minutes later, Trump emerged from the White House to have his photo op in front of the nearby church.

In response to this incident, Budde told the Washington Post that she is “outraged” by the president’s actions. “I am the bishop of the Episcopal Diocese of Washington and was not given even a courtesy call that they would be clearing with tear gas so they could use one of our churches as a prop,” Budde told the Post.

She also denounced Trump for holding a Bible “that declares that God is love and when everything he has said and done is to enflame violence.”