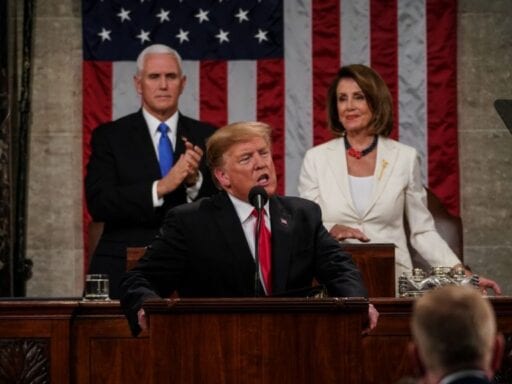 These bereaved parents have played a key political role.

President Donald Trump has always liked to bring up “angel moms” — the bereaved parents or relatives of those who have died because of an “illegal alien.”

On the campaign trail in 2016, he would give speeches in front of a line of despondent parents and relatives, their shirts plastered with the faces of lost loved ones. At his State of the Union speech, Trump brought Debra Bissell, whose parents were “burglarized and shot to death in their Reno, Nevada, home by an illegal alien.” And when Trump declared a national emergency to divert military funds toward the southern border to build a wall, he had “angel moms” sitting in the audience.

“Not one more American life should be lost because our nation failed to control its very dangerous border,” Trump said at his State of the Union address.

“Angel moms, angel dads, angel families; These are great people,” Trump said at a press conference weeks later, when he declared a national emergency at the border. “They’re fighting for their children that have been killed by people who were illegally in this country. And the press doesn’t cover them. They don’t want to. And they’re not treated the way they should be. They are fighting for other people because they don’t want what happened to their children or husband or anybody.”

By giving these “angel families” a platform, Trump is sending a clear message on immigration: Look at all the Americans that undocumented immigrants have hurt. Look at what “illegal aliens” have taken away. Be afraid of the danger these immigrants pose to your community and to your children.

But who are the “angel moms”? From the beginning they went beyond the generic subgroups of moms often deployed in politics — like “soccer moms” and “Walmart moms” typically used as political shorthand for figuring out if “white women are going to fall out in a different way this election,” Debbie Walsh, director at the Center for American Women and Politics at Rutgers University, told me in 2016.

It turns out they are not a group within themselves, even though their name overlaps with a group established more than a decade ago. Instead, they are part of a larger immigration-skeptic movement, and one that is crucial to Trump’s us-against-them message on immigration.

Who are “angel moms”?

Trump’s “angel moms” on the campaign trail were from the Remembrance Project, a Texas-based nonprofit founded in 2009 that “advocates for families whose loved ones were killed by illegal aliens,” according to its website. Its mission is to educate “the public of the epidemic of killings across the country, and raising awareness of the effects of illegal immigration.”

For the Remembrance Project, and for Trump, “angel moms” is a “term used within the organization” to denote mothers who have lost children to incidents involving undocumented immigrants.

There are groups in a similar vein to the Remembrance Project across the country. Facebook pages, like “California Victims of Illegal Aliens,” dedicated to highlighting stories of Americans who have died due to “illegal aliens and foreign criminals in the US, especially those who have been killed by illegals,” aggregate news stories and statistics on immigration.

Trump likes to tell these stories:

“Your husband was just killed in Maryland,” Trump said at a White House press conference with an “angel mom” in the audience. “Incredible man just killed. Beautiful children won’t be seeing their father again. These are brave people. These are people that don’t have to be here. They don’t have to be doing this.”

Unsurprisingly, a lot of the news stories around these crimes come from Breitbart News, the outlet that delivered Trump his campaign CEO, Steve Bannon. There’s even a tag on Breitbart that pulls together all “angel moms” stories in one place.

Trump has a simple and direct narrative when it comes to immigration: Immigrants disrupt the natural order of a safe and quiet American lifestyle. Framing immigration as an us-against-them debate has worked well for him. The message was finely tuned throughout his campaign and continues to take center stage during his presidency.

Trump’s message reflects the loud, anxiety-inducing worldview on immigration, committed to making Americans afraid of the dangers immigrants bring to American shores. The stories from the “angel moms” are the first-person accounts of this worldview.

For Trump and Breitbart, immigration is told through a lens of crime. Regardless of the fact that immigrants are statistically less likely to commit crimes than native-born Americans, the “angel moms” give the real human voices to Trump’s message on immigration — one that is less based in policy than in an emotional appeal.