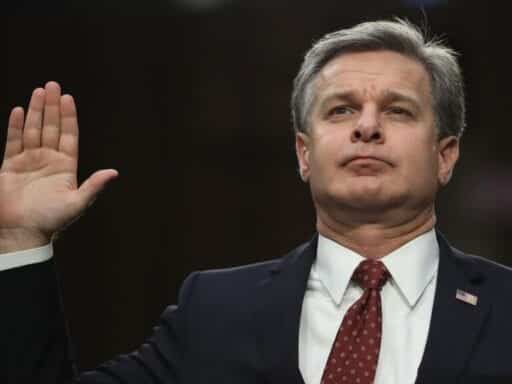 Wray won’t indulge Trump’s conspiracy theories, and the president isn’t happy about it.

While President Donald Trump, and his enablers in Congress and the media, were pushing flabbergasting lies about Justice Department Inspector General Michael Horowitz’s report on the Russia investigation Monday, FBI Director Christopher Wray did an interview with ABC in which he told the truth.

“The Inspector General did not find political bias or improper motivations impacting the opening of the investigation [into the Trump campaign], or the decision to use certain investigative tools during the investigation,” Wray said.

Wray went on to acknowledge that the report wasn’t all sunshine and rainbows for his bureau, adding, “The Inspector General did find a number of instances where employees either failed to follow our policies, neglected to exercise appropriate diligence, or in some other way fell short of the standard of conduct and performance that we and that I as director expect of all of our employees.”

FBI Director Chris Wray: “The inspector general did not find political bias or improper motivations impacting the opening” of Russia probe, “or the decision to use certain investigative tools.”@PierreTABC: “Including FISA?”

Wray’s comments are about as succinct and fair a summary of the IG report as you’ll find. In the same interview, he swatted down Trump’s conspiracy theories about Ukraine — not Russia — being behind election interference, saying “we have no information that Ukraine interference with the 2016 presidential election.”

These comments are grounded in reality, but they don’t support the absurd notion Trump pushed in the aftermath of the IG report’s release. Trump claimed it shows that “this was an overthrow of government, this was an attempted overthrow — and a lot of people were in on it.”

And so on Tuesday morning, Trump lashed out on Wray on Twitter in a manner reminiscent of his public attacks on then-Attorney General Jeff Sessions before his firing, and that fueled speculation about whether Wray — who he notably described as the “current” director of the FBI — might end up being the second FBI director kicked to the curb by Trump during his first term.

“I don’t know what report current Director of the FBI Christopher Wray was reading, but it sure wasn’t the one given to me,” Trump wrote. “With that kind of attitude, he will never be able to fix the FBI, which is badly broken despite having some of the greatest men & women working there!”

I don’t know what report current Director of the FBI Christopher Wray was reading, but it sure wasn’t the one given to me. With that kind of attitude, he will never be able to fix the FBI, which is badly broken despite having some of the greatest men & women working there!

The timing of Trump’s broadside on Wray is surreal, coming as it does on the same day that Russian Foreign Minister Sergey Lavrov is scheduled to visit the White House. The last time Lavrov did that was in May 2017, immediately after Trump fired FBI Director James Comey amid an active investigation of his campaign.

During that meeting — which was closed to the American press but not Russian photographers — Trump created a scandal by reportedly sharing highly sensitive classified intelligence with Russian officials, told them he was “unconcerned” about Russian election meddling, and described the Comey firing as relieving “great pressure” he was feeling from the Russia investigation. (Trump apparently didn’t foresee that Comey’s firing would lead to the appointment of special counsel Robert Mueller.)

But that strange coincidence aside, Trump’s attack on Wray illustrates how he continues to demand complete and utter personal loyalty from administration officials. Even comments that would be anodyne in any other era, such as ones accurately interpreting the main takeaways of an IG report, are taken by Trump as a personal attack, because they don’t accord with his pre-baked narrative about “deep state” forces conspiring to take him down.

As in the House Intelligence & Judiciary Committes, the Trump era GOP is no longer treating evidence & facts even as a speed bump in crafting “alternative facts” meant to shape reality for an audience enveloped in the conservative Information ecosystem. https://t.co/zTUvHCEVFG

Not only do Wray’s comments stand in contrast to Trump, but they clash with comments made by Attorney General Bill Barr and US Attorney John Durham, both of whom released statements that, without offering evidence, disputed Horowitz’s finding that the investigation into the Trump campaign’s foreign contacts was opened properly.

But even Barr said in his statement that he has “full confidence in Director Wray and his team at the FBI.” It appears that sentiment isn’t fully shared by Trump, upset as always that one of his top law enforcement officials won’t do his personal bidding.

What we know about a shooting, stabbing, and fire in Honolulu, Hawaii
The 3 best new movies out this weekend
Russians reportedly hacked Burisma, the Ukrainian gas company tied to Hunter Biden
The pandemic is changing college. Let’s reconsider GPAs while we’re at it.
“Stop the count” vs. “count every vote”: The post-election protests around the country, explained
Will Brett Kavanaugh turn out the Republican base in 2018? Republicans aren’t sure.