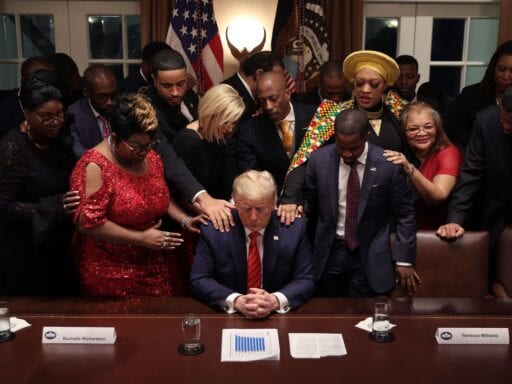 Share
Loading...
African American supporters lay their hands on President Trump as they pray for him at the conclusion of a news conference and meeting in the Cabinet Room at the White House on Thursday. | Chip Somodevilla/Getty Images

President Donald Trump lashed out on Friday at the network that normally covers him so favorably over a new national poll that shows him losing hypothetical head-to-head popular vote matchups against all six of the top Democratic presidential candidates.

“Worst Polls, just like in 2016 when they were so far off the mark, are the @FoxNews Polls,” Trump tweeted on Friday morning.

Worst Polls, just like in 2016 when they were so far off the mark, are the @FoxNews Polls. Why doesn’t Fox finally get a competent Polling Company?

That tweet came 37 minutes after Fox News displayed a graphic on the air highlighting the results of a new network poll that shows Joe Biden, Bernie Sanders, and Mike Bloomberg beating him handily, with Elizabeth Warren, Pete Buttigieg, and Amy Klobuchar leading him by spreads that are within the margin of error.

As is the case with most everything Fox News broadcasts, Trump was apparently watching. And he apparently didn’t appreciate the reminder about it not in fact being the case that a majority of the country loves him.

His attack on Fox News serves as a reminder that despite a rough-and-tumble and still-uncertain Democratic primary, he’s eminently beatable in November.

While it’s obviously possible for Trump to repeat what he did in 2016 and win the election even if he loses the popular vote, there’s almost no chance of him losing the popular vote by a deficit of this magnitude against Biden, Sanders, or Bloomberg and still prevailing in the Electoral College. (Some other polls have been more favorable to Trump’s odds.)

And considering the poll was conducted during the early part of a week that saw a historic stock market slide amid concerns about the coronavirus pandemic and the Trump administration’s capacity for dealing with it, there’s reason to believe the president’s standing isn’t improving anytime soon. Of course, we’re still months from the general election, and it’s worth remembering that Hillary Clinton also had a healthy lead over Trump at this point in the 2016 election cycle.

Still, the poll is mostly bad news for Trump. But instead of doing some self-reflection, he’s doing what he’s in the habit of doing and attacking the messenger.

Despite what Trump would have you believe, Fox News polls are reliable

While Fox News’s on-air programming is known for its occasionally absurd pro-Trump spin, its polling is as reputable as it gets. Trump, however, hasn’t been shy about indicating that he thinks the network should be rigging polls to make him look better.

The @foxnewPolls, always inaccurate, are heavily weighted toward Dems. So ridiculous – same thing happened in 2016. They got it all wrong. Get a new pollster!

Trump’s suggestion that Fox News polling shouldn’t be taken seriously because they were off in 2016 is a mistaken one. The network’s final 2016 poll found Hillary Clinton leading Trump by a 4-point spread (48 percent to 44 percent) that was quite close to Clinton’s ultimately margin of victory in the popular vote (48 percent to 46 percent). This election cycle, Fox News has consistently found Trump trailing the top candidates vying for the Democratic nomination.

Who that nominee will be remains an open question. Fox News’s new poll is its first this election cycle that shows Biden slipping out of the national frontrunner spot, with Sanders taking the lead.

While the poll shows Trump lagging behind each of the top Democratic candidates, it also shows that voters believe Trump will win a second term. Fifty-six percent of respondents said they think Trump will be reelected — a 12 percent increase from last October.

But what voters think will happen is less important than how they plan to vote. And while Trump may not want to believe it — especially coming as it does from a network from which he expects blind loyalty — the reality is that Fox News finds that a majority of registered voters (52 percent) are already saying they’ve either definitely (45 percent) or probably (7 percent) made up their minds to vote for someone else.