Trump lashes out at Michael Cohen over tape: “So sad!” 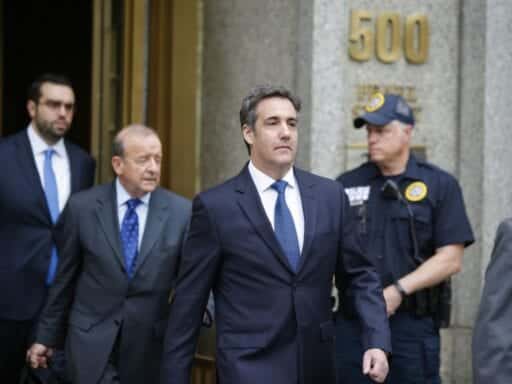 His latest attack comes in the wake of a publication of the recording.

President Donald Trump unleashed his indignation again on former attorney Michael Cohen after the publication of a secret tape the lawyer had made of the two men’s conversation. In the recording — which has been obtained by the FBI and aired by CNN — the men are apparently discussing a potential payoff to former Playboy model Karen McDougal, who alleged an affair with Trump between 2006 and 2007.

Trump has slammed Cohen’s taping of their discussion as “inconceivable” — framing the attorney as the villain — and seeking to cast doubt on any negative ramifications this conversation might have for him. “Why was the tape so abruptly terminated (cut) while I was presumably saying positive things?” he wrote in his Wednesday tweet. The tape is part of an ongoing federal criminal investigation examining Cohen’s business dealings.

What kind of a lawyer would tape a client? So sad! Is this a first, never heard of it before? Why was the tape so abruptly terminated (cut) while I was presumably saying positive things? I hear there are other clients and many reporters that are taped – can this be so? Too bad!

As Vox’s Jen Kirby reports, the muffled audio includes discussion between Cohen and Trump about what seems like a transaction involving American Media Inc. chief David Pecker. “I need to open up a company for the transfer of all of that info regarding our friend David,” Cohen says to Trump.

American Media Inc. owns the National Enquirer, a publication with which McDougal — the former model — inked a $150,000 deal in exchange for her story on Trump. (The Wall Street Journal reported on the deal between McDougal and AMI in November 2016.) In April, McDougal reached a settlement with American Media, the Enquirer’s publisher, allowing her to talk publicly about the affair.

Per CNN, the tape features the following exchange:

Trump interrupts Cohen asking, “What financing?” according to the recording. When Cohen tells Trump, “We’ll have to pay.”

Trump attorney Rudy Giuliani has acknowledged the existence of the tape, but denied that Trump did anything wrong. “Nothing in that conversation suggests that he had any knowledge of it in advance,” Giuliani told the Times. He added that Trump had even pressed for the use of a check to ensure proper documentation if any payment were to transpire.

Full audio: Presidential candidate Trump is heard on tape discussing with his attorney Michael Cohen how they would buy the rights to a Playboy model’s story about an alleged affair Trump had with her years earlier, according to the audio recording “https://t.co/YmC0QuDqTx pic.twitter.com/fBbq7r1Lq9

There are more tapes, but this is reportedly the only one with Trump

There are reportedly a dozen tapes that were seized from Cohen’s office during a raid by federal authorities earlier this year, although the other 11 are said to feature conversations with the media.

As the focus on both the tape and these payments intensifies, Trump’s tweet seems to suggest that his main priority is shifting the scrutiny toward Cohen and absolving himself of any implications of wrongdoing. “The good news is that your favorite President did nothing wrong!” he wrote this weekend.

Andrew Yang on UBI, the coronavirus, and his next job in politics
What we can learn from the “second wave” of coronavirus cases in Asia
Plane ticket prices are dropping because of the coronavirus
Jacquelyn Brittany’s viral elevator moment made her the star of a populist DNC fairy tale
The Kavanaugh problem: “presumption of innocence” can’t work without real investigations
“I want him out”: Lisa Murkowski calls for Trump’s resignation