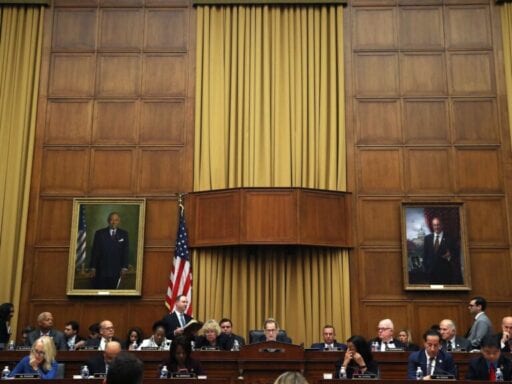 But Democrats are pushing ahead anyway.

The White House has announced that neither President Donald Trump nor his lawyers will participate in the House Judiciary Committee’s first hearing in the impeachment inquiry Wednesday.

Though Trump has recently signaled openness to providing written testimony in the impeachment hearings, he has also repeatedly worked to delegitimize them, meaning his decision not to accept committee Chair Jerry Nadler’s invitation isn’t particularly surprising.

Republican allies of Trump have leveled process complaints against the inquiry since it began, and in rejecting the Judiciary Committee’s invitation Sunday evening, White House counsel Pat Cipollone continued that line of attack, calling the upcoming hearing poorly defined and the inquiry riddled with “profound procedural deficiencies.”

Despite this, Cipollone said the White House may participate in future hearings, which will likely focus on specific articles of impeachment.

Trump’s participation had received bipartisan support in the Judiciary Committee, with Democratic member Val Demings saying Sunday, “We are certainly hoping the president, his counsel will take advantage of that opportunity” and Republican member Tom McClintock saying, “I think it would be to the president’s advantage to have his attorneys there.”

When Nadler invited the president and his legal team last week, he said they would have the opportunity to question witnesses if they attended.

Ultimately, however, the White seemed to agree with the analysis of ranking member Doug Collins who said Sunday, “Why would they want to participate?”

Democrats have argued that the upcoming hearing would provide the president with an opportunity to participate in the process and to help shape it, while making the case for his innocence. But participating in the inquiry would be an admission of its legitimacy, and the president and his allies have made it clear they believe the proceedings to be, as Cipollone put it in his letter, “baseless and highly partisan.”

Nevertheless, the Democrats plan to continue — with or without the cooperation of the president.

Wednesday’s hearing is scheduled to focus on providing a clear definition of what constitutes an impeachable offense. All witnesses will be legal experts, who will explain Article Two, Section 4 of the Constitution, which states a president can be “removed from Office on Impeachment for, and Conviction of, Treason, Bribery, or other high Crimes and Misdemeanors.” Treason and bribery are well defined — high crimes and misdemeanors less so.

It might not make for a blockbuster hearing, but House Democrats seem to want to generate a common understanding of that definition as members of the Judiciary Committee work to draft articles of impeachment; these will be written up based on the findings of the House Intelligence Committee, which took the lead on the first phase of the inquiry.

The results of the Intelligence Committee’s investigations — which included two weeks of public hearings — have been compiled into a report committee Chair Adam Schiff will present to the committee by Monday evening.

Intelligence Committee members will vote on whether they approve this report by Tuesday evening; it is expected to be approved on party lines. From there, it will be sent for the Judiciary Committee to review, and, based on the information in the report and information gathered during their hearings, the Judiciary Committee is expected to decide whether to draft articles of impeachment as early as next week.

After that, as Vox’s Ella Nilsen, Li Zhou, and Matt Yglesias have explained:

The House Judiciary Committee would vote on these charges and then advance them to a vote by the full House. The House then decides if it officially wants to charge the president on these counts, a move that requires a simple majority to pass.

From there, a trial presided over by Supreme Court Chief Justice John Roberts would begin in the Senate. The timeline of all this is not yet clear, although Nilsen has reported House Democrats believe a vote on impeachment could come before the end of 2019, meaning the Senate trial would begin in January.

The next step is, of course, Wednesday’s hearing, which is expected to be far more academic than the hearings conducted by the Intelligence Committee.

The Judiciary Committee is expected to hear from four witnesses, three selected by Democrats and one selected by Republicans. All four will be constitutional scholars, but Republicans have complained that more witnesses should be added and that the minority should be allowed to bring in more experts.

In a letter to Nadler, Collins complained the panel “is less than a quarter of those called to testify during the Clinton impeachment,” and Sunday told Fox News’s Chris Wallace he feels there ought to be a “two-for-two” balance of Republican and Democratic sanctioned experts, while also arguing the hearing was unnecessary given “We’ve already had constitutional scholars in the committee talking about from the Mueller report.”

He did not explain how the hearing is simultaneously insufficient and more than is necessary, but Republicans are expected to express similar complaints about the session Wednesday.

Who the witnesses are has not yet been announced; Democratic Judiciary Committee member Hakeem Jeffries told Wallace that as of Sunday morning, members had not been told who they’d be hearing from, saying, “I think they’re still trying to work out the details.”

The hearings to come are similarly not yet clear, but Trump and his team have been invited to those as well. Nadler has given the White House until December 6 to decide whether it would like to be involved in these upcoming sessions; Cipollone has said the president is considering doing so.

The best $10 I ever spent: sleep headphones to soothe my bedtime anxiety
The New York Times used to be afraid of BuzzFeed. Now it’s hired its biggest star.
How does this coronavirus outbreak end?
4 winners and 3 losers from the presidential town hall on LGBTQ issues
The Republican establishment’s long dalliance with the conspiracist right
The obscure rule that is discouraging billionaires’ foundations from going big on coronavirus