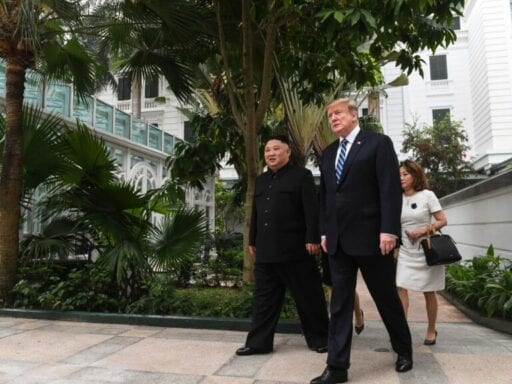 The “excellent” relationship between Trump and Kim Jong-Un might be enough to get the two leaders in a room, but not necessarily to a resolution between their countries.

President Donald Trump signaled he’s open to another summit with North Korea in a pair of tweets Saturday. The president’s message followed a speech by Kim Jong Un last week in which the leader presented the US with a deadline for moving negotiations between the two countries forward.

According to North Korean state media, Kim took a tough approach, saying, “It is essential for the US to quit its current calculation method and approach us with a new one.”

The North Korean leader said he plans to give the Trump administration “till the end of this year” to come up with a negotiation approach he finds more agreeable, and warned “I think it will definitely be difficult to get such a good opportunity as the previous summit.”

The speech comes nearly a month after a failed summit between Trump and Kim. The leaders met in Vietnam to discuss a deal meant to denuclearize North Korea, but that summit ended early with both sides blaming the other for the lack of progress.

In a pair of tweets Saturday, Trump suggested his personal relationship with Kim did not suffer due to the failed summit, calling it “excellent,” and said “ a third Summit would be good in that we fully understand where we each stand.”

The president also praised “the leadership of Chairman Kim” and said once a nuclear deal is completed and sanctions are removed North Korea will become “one of the most successful nations of the world.”

I agree with Kim Jong Un of North Korea that our personal relationship remains very good, perhaps the term excellent would be even more accurate, and that a third Summit would be good in that we fully understand where we each stand. North Korea has tremendous potential for…….

….extraordinary growth, economic success and riches under the leadership of Chairman Kim. I look forward to the day, which could be soon, when Nuclear Weapons and Sanctions can be removed, and then watching North Korea become one of the most successful nations of the World!

At a meeting with South Korean president Moon Jae-in at the White House last Thursday, Trump spoke with Moon about a third meeting citing, in part, his personal relationship with Kim.

“I enjoy the summits,” Trump told his South Korean counterpart. “I enjoy being with the chairman.”

Kim addressed the US-South Korean relationship in his remarks, arguing the US is impeding progress on the Korean peninsula with its sanctions, forcing South Korea to steer clear of projects that would unite the two Koreas.

The North Korean leader said he is faced with a choice to either “keep maintaining the atmosphere of improving the North-South ties or to go back to the past when the ties plunged into a catastrophe with the danger of a war increasing.”

The US faces a tricky diplomatic approach

North Korean diplomacy represents a challenge for every US administration, and Trump has put his personal reputation as a negotiator on the line in talks with Kim. Ahead of the second summit, Trump decided to leverage the relationship he built with Kim to get a deal. As Vox’s Alex Ward reported:

Instead of reserving such a high-profile meeting for until after a final deal had been reached, as is the usual custom, the president decided to make personal engagements with Kim the centerpiece of his strategy.

That plan just blew up in his face. Instead of leaving Hanoi with a brand new deal — helping his case that his way works better than the orthodox method — Trump flew back to Washington with nothing.

Following the failure Vietnam, the Trump administration announced a new, tougher stance on North Korea. In early March, US Representative for North Korea Stephen Biegun said the US will only lift sanctions once North Korea has given up all of its weapons of mass destruction.

Previously the US only wanted North Korea to give up its nuclear capabilities; this policy would force it to also hand over its chemical and biological weapons. Biegun also said, “We are not going to do denuclearization incrementally.”

Incremental denuclearization is exactly what North Korea has traditionally wanted to do. In the ideal North Korean framework, the US would offer a concession, such as agreeing to end joint military exercises with South Korea, and North Korea would make a concession, perhaps shutting down some nuclear test sites. Concessions would continue on each side until all nuclear weapons had been removed from North Korea.

Whether Trump will decide to reverse course remains to be seen. However, Saturday’s tweets and Kim’s speech provide an opportunity and rough timeline for future talks.

Listen to Impeachment, Explained on Apple Podcasts
Facebook’s sad summer continues with a $650 million settlement
We’re underestimating the mind-warping potential of fake video
Swing-state Pennsylvanians are divided on fracking. Here’s why.
Donald Trump and the disturbing power of dehumanizing language
DC Metro criticized for how it handled white nationalists during Unite the Right