Trump loves dictators. Erdogan is the latest to take advantage of that. 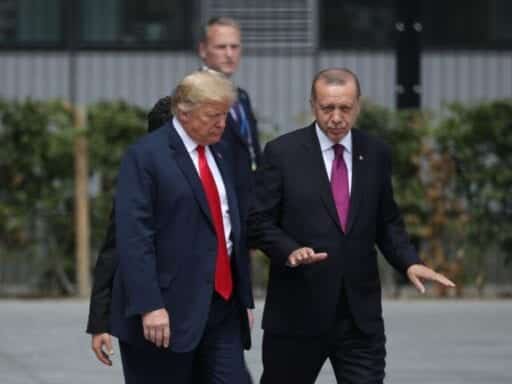 The troubles facing Syria — and troubles elsewhere — are in large part caused not by America’s weakness, but by Trump’s.

President Donald Trump is bragging that his decision last week to withdraw US troops from northern Syria — leaving America’s allies, the Syrian Kurds, to fend for themselves against invading Turkish forces — was a “strategically brilliant” masterstroke. He also says the Syria ceasefire his administration agreed to with Turkey on Thursday amounted to “a great day for civilization.”

But he doesn’t seem to know that he’s played right into Turkish President Recep Tayyip Erdogan’s hands — the latest horrifying example of how Trump gets taken advantage of by wily strongmen.

The ceasefire in Syria is already falling apart. Shelling and gunfire are ringing out in Ras al-Ayn, a town in Syria’s north, as Turkish forces also target medical and aid organizations to stop the evacuation of injured civilians. Erdoğan, however, falsely told reporters Friday that clashes between Turkish-backed troops and Syrian Kurds weren’t happening. He seemingly relayed that same message to Trump during a recent phone call — and the president bought it.

…..this thinking years ago. Instead, it was always held together with very weak bandaids, & in an artificial manner. There is good will on both sides & a really good chance for success. The U.S. has secured the Oil, & the ISIS Fighters are double secured by Kurds & Turkey….

That’s just embarrassing. Despite clear evidence that violence continues in northern Syria, all it took was Erdoğan saying, “Nope, nothing to see here!” to convince Trump the ceasefire was actually holding. Trump even backed Erdoğan by saying that the Turkish president “very much wants the ceasefire, or pause, to work.”

Trump, announcing the ceasefire on Twitter Thursday, had thanked Erdoğan for agreeing to it, saying, “Millions of lives will be saved!” Erdoğan responded, tweeting: “Mr. President, many more lives will be saved when we defeat terrorism, which is humanity’s arch enemy.”

That may sound innocuous, but it’s anything but. Erdoğan’s entire rationale for killing Kurds in Syria is that they are “terrorists” because they are closely aligned with the PKK, a Kurdish armed group that for decades has waged a violent insurgency inside Turkey to establish an independent Kurdish state.

So the message Erdoğan was sending with his response was essentially: “Sure, this ceasefire of yours may save the lives of the Syrian Kurds, but it would save more lives if you’d just let me kill them all because they’re terrorists.” It was a very grim, and defiant, message Erdoğan was giving Trump.

Unfortunately, that subtle message was apparently completely lost on Trump — because minutes after posting that earlier Twitter thread on Friday, he quoted Erdoğan’s message and added one of his own: “DEFEAT TERRORISM!”

Trump completely missed that Erdogan was basically trolling him and instead boosted the Turkish president’s anti-Syrian Kurd propaganda.

It would be funny if it weren’t all so tragic. Despite having some of the world’s greatest intelligence agencies at his disposal, Trump instead prefers to believe whatever a strongman tells him.

Even more embarrassing, it’s clear Erdoğan doesn’t reciprocate the admiration. Speaking to reporters Friday about the stunning letter Trump had sent him — “Don’t be a tough guy! Don’t be a fool!” part of it read — Erdoğan said the letter “was not in line with diplomatic and political courtesy.”

“We will not forget this lack of respect. This is not a priority for us,” Erdoğan said at a press conference in Istanbul. “But when the time comes we would like it to be known that we will take the necessary steps.”

According to the BBC, the Turkish leader threw the letter in the trash.

It’d be one thing if world leaders just put up with Trump. It’s another entirely that Trump allows them to take advantage of his unpreparedness and predilection for flattery to serve their needs instead of America’s.

If you’re wondering where foreign policy has gone wrong under Trump, look no further than his fawning over autocrats.

“This all seems to result from Trump’s somewhat bizarre but persistent belief that you can only trust the word of other strongmen — from China’s Xi Jinping to North Korea’s Kim Jong Un to Russia’s Vladimir Putin,” Paul Musgrave, a US foreign policy expert at the University of Massachusetts at Amherst, told me.

“I’m not sure I can easily think of other times when this sort of personal trust in authoritarian leaders has so dictated US presidents’ approaches,” Musgrave added.

That’s not all, but you get the idea. And why is Trump so easily entranced by these men? Partly because they have done a lot to flatter him.

When Saudi Arabia hosted Trump in May 2017, for example, they projected a five-story image of his face onto the Ritz-Carlton hotel where he stayed.

When Trump visited China for the first time as president later that year, Beijing delivered its own special reception for him, calling it a “state visit-plus.” Among many lavish things, Trump and Xi dined in the Forbidden City, Beijing’s ancient imperial palace for Chinese emperors. It’s an honor that a US president hadn’t been granted since the founding of modern China.

Kim has continually given Trump what he wants: recognition for doing something historic. Trump is now the first sitting president to meet with a North Korean leader, and even became the first to step inside the country this year.

And while Turkey hasn’t gone out of its way to praise Trump, Erdoğan had to know the American president was an easy mark. They’ve looked cozy together whenever they’ve met, and he knew Trump spent years railing against US troop deployments to the Middle East. All he had to do, then, was play nice, flatter Trump, and he knew he’d probably get what he wanted.

The troubles facing Syria — and troubles elsewhere — are therefore in large part caused not by America’s inherent weakness, but by Trump’s.