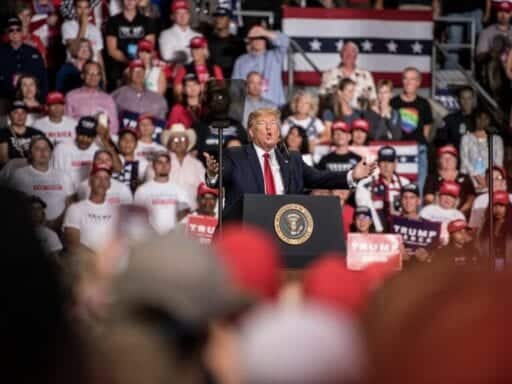 “He looks more like a WASP than I do!”

President Donald Trump did his best to appeal to Latinx voters during his rally on Monday evening in Rio Rancho, New Mexico. His “best,” however, was profoundly bizarre.

In one especially odd moment, Trump remarked upon how white one of his key Latino surrogates looks.

“He happens to be Hispanic, but I’ve never quite figured it out because he looks more like a WASP than I do. So I haven’t figured that one out. But I’ll tell you what — there is nobody that loves this country more or Hispanic more than Steve Cortes,” Trump said. (Cortes is a pro-Trump television commentator and member of Trump’s Hispanic Advisory Council.)

“Nobody loves the Hispanics more!” Trump continued, before asking Cortes a question that suggested Latinos have dual loyalties: “Who do you like more, the country or the Hispanics? He says the country. I don’t know, I may have to go for the Hispanics to be honest with you. We got a lot of Hispanics! We love our Hispanics.”

Trump remarks on how white Steve Cortes looks for being Hispanic, then bizarrely asks him, “Who do like more — the country or the Hispanics? He says the country … I may have to go for the Hispanics to be honest … we love our Hispanics.” #wut pic.twitter.com/W37pDuKL12

Trump’s words are at odds with reality. Polling indicates American Latinos feel more insecure than they did before 2016, in part because of the sort of hardline anti-immigration rhetoric that he didn’t shy away from using Monday night. And since Latino households are more likely to experience poverty and food insecurity than others, the budget cuts Trump has annually proposed puts them in an especially precarious position.

It makes sense that Trump would put effort into Latino outreach in New Mexico, which has the highest percentage of Latinos of any state of the country. But remarking on the tone of an ally’s skin and suggesting Latino voters have dual loyalties are probably not the best ways to do it. Trump’s comments unsurprisingly seemed to play well to his supporters in the room, but they are unlikely to win many new ones in a state where he can use all the supporters he can get.

Trump’s comments about Cortes came after he remarked about polling that purportedly shows his popularity among Latinos on the rise.

Trump claims, dubiously, that there’s a poll that exists that shows him “up by 17 percent” among Latinos.

“They want the wall!” he says. pic.twitter.com/81zwfnVlxr

But despite what he said on Monday, Trump is not doing well among the Latinx community. Polls consistently show his approval rating at about 30 percent. The HuffPost has a rundown:

A Washington Post-ABC News poll last week found that only 25 percent of Hispanics approve of the job Trump is doing as president ― considerably lower than his overall approval rating of 38 percent. A CNN/SSRS poll, also conducted last week, showed Trump’s approval rating among Hispanic adults to be 29 percent.

Trump’s poor performance is dragging him down in New Mexico, a state he lost by 8 points to Hillary Clinton in 2016. According to Morning Consult’s tracking polls, Trump’s approval rating in the state has dropped a whopping 34 points since his inauguration, and as of last month, sat 17 points underwater.

Nonetheless, during his rally on Monday, Trump insisted he plans to win New Mexico in 2020. His sales pitch largely centered around low Latinx unemployment rates and stoking fears about immigration — but these were also key components of his campaign message heading into last year’s midterms elections, and Republicans ended up losing all five statewide races in New Mexico. At this stage, there’s little reason to believe things will be different next November.

The messy reality of Donald Trump’s poll numbers
11 questions about Brexit you were too embarrassed to ask
The bizarre media hoopla over Alan Dershowitz’s social life in Martha’s Vineyard, explained
Arizona Republicans wrestle with McCain’s criticism of Trump — and his iconic vote on health care
Wonder Woman 1984 will debut on HBO Max this Christmas
Here’s an idea to save local news: Stop trying to make a profit from local news