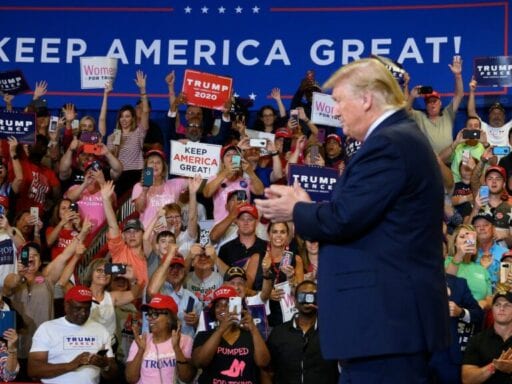 The height of irony in Fayetteville.

On Monday night, President Donald Trump was in North Carolina to stump for Dan Bishop, a Republican who is competing with Democrat Dan McCready in a special election on Tuesday to fill the Congress seat vacated by former 9th District Rep. Mark Harris (R-NC) after evidence emerged that the Harris campaign was involved in a ballot tampering scheme.

But in a sign of just how brazen Trump’s lies can be, the president used the occasion not to try to draw a distinction between Harris’s scandal and Bishop’s campaign, but to make baseless accusations that undocumented immigrants are involved in massive voter fraud in California.

On topic of sanctuary cities, Trump, already sweating, asks a woman in the crowd how she feels about having “them released [into your neighborhood] — hardened, horrible criminals.”

He then pushes a big lie about voter fraud in California. pic.twitter.com/DD078cMUaJ

Trump has repeatedly tried to explain away his 2016 popular vote lost by alleging, without evidence, that massive cheating occurred. But while the scandal he’s pushing is a fake one, the irony is Trump wouldn’t even have been in North Carolina on Monday evening if a Republican there hadn’t gotten caught cheating.

The proceedings lasted four days, with Harris taking the stand on the final day.

But before he did, the board revealed that Harris’s campaign had produced new evidence the night before Harris was to testify: previously undisclosed contacts between the candidate and Dowless. Harris’s attorneys said they had misunderstood the extent of the investigation’s request. Democratic attorney Marc Elias referred to the documents as “explosively important.” He asked the court to consider the way in which the evidence was released as “adverse interference” by the Harris team.

Harris then spent most of the final day being grilled about his relationship with Dowless, before he made the stunning admission that the evidence demanded a new election be held. He had been the apparent winner on election night over Democrat Dan McCready, by less than 1,000 votes.

It’s understandable that Trump wouldn’t want to bring Harris up while trying to motivate his supporters to get out and vote for Bishop. But the fact he would use such an occasion to accuse the other side of cheating shows just how shameless he can be.

The rest of Trump’s speech was pretty standard fare. He stoked fears by describing undocumented immigrants as “hardened, horrible criminals,” made hyperbolic boasts about the size of his crowd (despite video evidence there was plenty of space in the audience), joked about serving more than two terms in office, lied about tariffs, and touted imaginary Republican health care plans. It was broadly reminiscent of the campaign speeches Trump delivered in the weeks leading up to last year’s midterm elections — ones in which Republicans lost 40 seats in the House and control of the chamber.

Trump’s audience seems a bit disengaged as he rambles about NATO. This is basically the same rally speech he was delivering before the midterms — and we know how that turned out for House Republicans. pic.twitter.com/n4V3izyKdR

Trump won the district by 12 points in 2016, but experts think McCready, who’s running again, has a shot at turning it blue on Tuesday. Instead of grappling with the implications of that, however, Trump seems content to make unfounded claims about his party being victimized by massive conspiracies — even in the most inappropriate of circumstances.

Oscars 2020: the full list of nominees
Fox & Friends defended Trump’s embarrassing Chiefs tweet, because of course they did
New York City cracks down on Uber and other ride-hailing apps
Pete Buttigieg’s candidacy meant a lot to LGBTQ Christians like me
Primary voters head to the polls in 7 states
Trump on Supreme Court case that could overturn Obamacare: “I hope they end it”