Trump may still be infectious. He’s having events anyway. 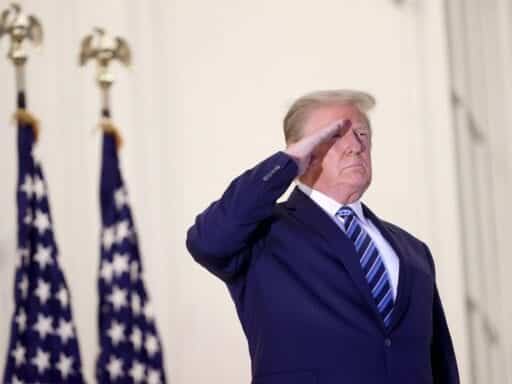 The president won’t say whether he’s tested negative for Covid-19, but he’s holding rallies on Saturday and Monday.

Despite being hospitalized with Covid-19 just last week, President Donald Trump announced Friday that his campaign would host a number of rallies and in-person events over the next week. But the White House has been tight-lipped about the president’s recent test results, potentially putting the health and safety of thousands of attendees at risk.

The president told Fox News’s Sean Hannity on Thursday that he’s eager to begin campaigning again, saying that he feels “so good,” adding, “We want to do a rally probably in Florida on Saturday night. I might come back and do one in Pennsylvania the following night.”

Ultimately, those events were not scheduled, but Trump on Saturday afternoon is set to speak to supporters on the South Lawn of the White House, his first public event since being diagnosed with the coronavirus that has so far claimed the lives of more than 213,000 Americans. Around 2,000 people reportedly have been invited. While the event is likely a violation of the Hatch Act, which imposes strict limits on federal employees’ participation in political activities, it is certainly a danger to public health.

After downplaying the Covid-19 pandemic throughout the year, the White House is now dealing with a troubling outbreak within its own walls stemming from a September 26 event in the White House Rose Garden to celebrate the Supreme Court nomination of Judge Amy Coney Barrett.

Several people who spent time at the White House in recent weeks, including former New Jersey Gov. Chris Christie and White House security official Crede Bailey, have been hospitalized with the virus, and several other administration officials and Republican lawmakers have tested positive for the virus.

White House officials and campaign representatives have shared only limited information regarding the status of Trump’s health, refusing to confirm when the president last tested negative prior to his diagnosis or whether he has tested negative since his hospitalization.

The president himself did not provide any clarity in a Friday evening interview on Fox News, saying only that he had recently been rested but that he

“[hadn’t] even found out number or anything yet.” Trump similarly could not provide details on his testing regimen, and seemed to suggest that he is not being tested every day, as his aides had once claimed. When asked when he would next be tested, he said, “probably tomorrow morning,” before saying, “They test every couple of days, I guess.”

Trump has stayed within the White House grounds since returning to work on Monday, but a return to public events could once again put the people around the president at potentially deadly risk.

The Centers for Disease Control and Prevention (CDC) recommends an infected person isolate for at least 10 days before engaging with other people.

Thursday, White House physician Dr. Sean Conley cleared Trump for events based on this guidance, saying, “Saturday will be day 10 since Thursday’s diagnosis, and based on the trajectory of advanced diagnostics the team has been conducting, I fully anticipate the president’s safe return to public engagements at that time.”

But the CDC also suggests that Covid-19 patients who have been hospitalized or who needed external oxygen — both criteria that apply to Trump — isolate for an a total of 20 days after the onset of symptoms to ensure they are no longer infectious.

Conley’s assessments of the president have been called into question before; last week he made misleading statements about Trump’s need for oxygen, later saying he misspoke. However, even if Trump is well enough to participate in rallies, attendees may not be.

And the president’s upcoming events aren’t limited to Saturday’s gathering at the White House. On Twitter Friday, Trump announced a “big rally” scheduled for Monday in Sanford, Florida, his first campaign stop since his diagnosis.

Recent polls show Florida deadlocked between Trump and Democratic presidential nominee Joe Biden, making it understandable that the president wants to return quickly to the campaign trail — particularly in a state with so many electoral college votes on the line.

But a Trump visit could potentially exacerbate worsening Covid-19 numbers in a state that was already struggling to contain the virus. And the move could easily backfire: According to the polls, voters heavily disapprove of the way Trump has handled the pandemic and his personal decision making has only worsened voter opinion in recent days. A Trump event that increases community spread in Florida would only serve to highlight the president’s role in failing to contain the coronavirus.

Hundreds of supporters who are traveling from all over the country are expected to attend the South Lawn speech Saturday afternoon, which Trump is scheduled to give from a White House balcony. The event, which has been dubbed a “peaceful protest for law and order,” was organized in part by conservative activist Candace Owens.

This sort of testing is limited in its effectiveness. For one, it misses asymptomatic people; for another, as Vox’s Brian Resnick has explained, scientists are still working to understand when an infected person can begin to spread the coronavirus, and whether infectious people can have negative test results.

All this means that there may be infectious people in the crowd despite these precautions. And evidence suggests that the fact the event will be held outside doesn’t mean it isn’t a recipe for another White House superspreader event.

For instance, last month, an outdoor Trump rally in Minnesota resulted in at least 9 people becoming infected and two being hospitalized.

No lessons appear to have been drawn from this event, and the fact the president will host thousands of people following the Barrett event would seem to indicate the same is true of that gathering.

With dozens of Republican lawmakers, and Trump himself refusing to quarantine in the election cycle’s final days, has some experts concerned about continued spread — among the GOP, Trump’s supporters, and all those they come into contact with.