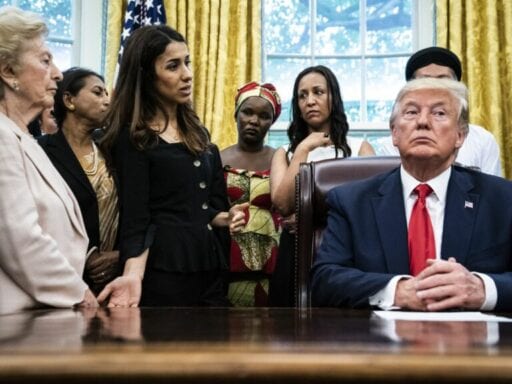 President Trump displayed awkwardness and ignorance throughout a meeting with refugees.

In a meeting with victims of religious persecution on Wednesday, President Donald Trump repeatedly appeared to be unaware of many of the world’s most pressing humanitarian crises.

Trump met with more than two dozen survivors of religious conflict, a few of whom told their stories — and made impassioned entreaties for aid — directly to the president. As he asked questions of his guests, the president seemed to reveal a stark lack of familiarity with the fundamental details of problems faced by Rohingya in Myanmar, Uighurs in China, and Yazidis in Iraq — groups in crisis that his own administration has established positions and policies on.

On multiple occasions, Trump asked refugees among the group where the conflicts they were fleeing were taking place.

Mohib Ullah, a Rohingya man who had escaped violence in Myanmar, explained that he was staying in a refugee camp in neighboring Bangladesh and asked the president what his plans are to help his beleaguered people. Trump replied by asking, “And where is that, exactly? Where?”

It was unclear if Trump was referring to the country that Ullah had fled or was staying in, but Ullah repeated that he was staying in Bangladesh, and Sam Brownback, the US ambassador-at-large for international religious freedom, attempted to intervene by explaining that Bangladesh is “next to Burma [an older term for Myanmar]” and that “the Rohingya have been run out.”

The president replied, “Thank you, appreciate it,” and moved on without ever answering Ullah’s question.

After asking Nadia Murad “You had the Nobel Prize?” Trump turns to Rohingya refugee and asks “Where is that exactly?” …
HT @AmarAmarasingam pic.twitter.com/V4CeR92lTy

The Trump administration’s official position is that Myanmar has engaged in “ethnic cleansing” of the Rohingya, a long-persecuted Muslim minority group, and it has imposed multiple rounds of sanctions on its military leaders for their human rights abuses.

In fact, just one day before Trump’s meeting, the administration announced new sanctions barring military leaders from Myanmar from entering the US because of their extrajudicial killings of Rohingya. Secretary of State Mike Pompeo said the new sanctions were being levied because he and the rest of the administration “remain concerned that the Burmese government has taken no actions to hold accountable those responsible for human rights violations and abuses, and there are continued reports of the Burmese military committing human rights violations and abuses throughout the country.”

Trump, however, did not mention these sanctions to Ullah, and based on his questions, did not appear to be overly familiar with the conflict between the Rohingya and the government and military of Myanmar in the first place.

When Jewher Ilham, a Uighur woman, said that millions of her people have been locked up in “concentration camps” and that she hadn’t seen her detained father since 2013, Trump again replied as if he was hearing about the crisis for the first time.

After Ilham explained that Uighurs live in western China in the Xinjiang province, Trump proceeded to ask her how long her father had been gone, even though Ilham had told him in her introduction.

After a brief back-and-forth about how often Ilham communicated with her father, Trump declared, “That’s tough stuff,” and moved on.

China treats its entire Uighur population as a national security threat and has established one of the most high-tech and invasive surveillance regimes in the world to regulate it. The Pentagon has described the mass detainment of Uighurs as “concentration camps,” and they have been a major point of tension between the US and China as they navigate trade talks — Chinese President Xi Jinping has reportedly asked the US remain silent on the camps should the Trump administration like its trade talks to with China to be successful.

The president also had an awkward exchange with Nadia Murad, a Yazidi refugee from Iraq who escaped captivity by ISIS. Trump again did not appear to pay close attention to her testimony, asking Murad where her family members were right after she’d told the president they had been killed.

Trump tried to steer the conversation toward the topic of ISIS no longer being in Sinjar, a town that has long been the home to the Yazidi ethnic and religious minority, but Murad explained that ISIS wasn’t the issue. Instead, she explained Yazidi refugees are afraid to return because of security and political concerns.

“You had the Nobel Prize?” Donald Trump learns of Yazidi activist Nadia Murad. Here’s how the interaction unfolded pic.twitter.com/DE3exTAm7N

“But now ISIS is gone. Now it’s Kurdish and who?” Trump asked.

Murad again explained that security forces are of concern to her people. There have been reports of skirmishes in the Yazidi homeland as the Iraqi government works to retake control from militias and the remnants of US-backed Kurdish forces.

After Murad elaborated on safety concerns, Trump pivoted, asking her about the Nobel Peace Prize she was awarded in 2018 — Murad was given the prize for her advocacy for the Yazidis. The group was attacked by ISIS in 2014; several thousand were killed, and more than 3,000 others were taken as slaves, including sex slaves.

The activist told the president she was given the prize for speaking out about her time as a slave, and her escape from bondage, as well as her work on behalf of the thousands of Yazidi women raped by ISIS troops.

Ultimately the timing of the meeting, intended to project an image of the Trump administration’s dedication to protecting refugees persecuted for their religions, was rather ironic. Immediately afterwards, the president attended a rally and whipped up xenophobic anger at perhaps the most prominent refugee in American politics, herself a US religious minority. And the next day, Politico reported that security officials in the Trump administration are considering cutting refugee admissions “to nearly zero” next year.

Trump reportedly plans to strip more security clearances to distract from the news cycle
Air travel is surging. That’s a huge problem for the climate.
25 cartoons to get obsessed with, now and forever
Building housing — lots of it — will lay the foundation for a new future
Brands are getting more “woke.” Who actually benefits?
Why Trump is rage-tweeting about the Minneapolis mayor