Trump needs to worry about the stock market less, and pandemic preparedness more 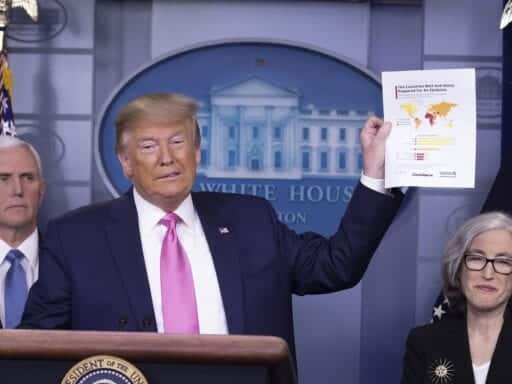 Happy talk is counterproductive at this point.

It’s obvious that President Trump has the stock market on his mind when he’s thinking about coronavirus, as evidenced by the two times during a press conference Wednesday evening when he blamed Democrats for the market’s fall.

That’s unseemly on its own terms, but it also seems to be driving a certain amount of happy talk from the president and his economic team, who keep contradicting clear messages from public health officials that a pandemic is likely.

Instead of accepting this, Trump tried to be reassuring, arguing that “the risk to the American people remains very low” and “I don’t think it’s inevitable” that the disease will spread. He said a vaccine is being developed “rapidly,” only to have Anthony Fauci, the head of the National Institute of Allergy and Infectious Diseases, clarify that in this context that means one is 12 to 18 months away.

And he angrily demanded credit for having restricted travel from China earlier, saying that subsequent events had vindicated him — a typical egomaniacal gesture from the president. But more to the point, it’s a sign that he continues to take undue refuge in the hope that the outbreak can be contained rather than endured.

The truth is, however, that investors and corporate decision makers with money on the line can and will take the time to listen carefully to what the experts are saying. Markets have fallen because the news they have to offer is simply not that good. The president is not going to meaningfully alter the trajectory of the stock market by downplaying the realities. He could, however, reduce the number of people who take adequate preparative steps now while the situation is still calm.

From containment to mitigation

The ideal thing to do when faced with an infectious disease outbreak is to contain it — isolate one or more areas where the outbreak is occurring, treat patients there, and hope the vast majority of the world will be spared.

Experts have been warning for days now that containment of the Covid-19 outbreak appears to be failing. That failure manifests itself in the number of cases currently present in Iran, Italy, and South Korea. But what’s more important to understand is that the spread of the disease to those three countries appears to reflect some fundamental factors. For starters, it’s simply not as deadly or debilitating as something like Ebola.

Many people contract only fairly minor symptoms, which is great for them, but increases the odds that they remain ambulatory and spread the disease. Worse, some people appear to be capable of spreading the virus before they exhibit any symptoms at all. Illnesses with those characteristics are just very hard to contain, which means that Covid-19 is very likely to keep spreading.

What we are realistically looking at now is not containment of a virus that is already on multiple continents, but efforts to mitigate the harm that it does by slowing its spread.

Australian epidemiologist Ian Mackay posted this chart that I found helpful to understand the principle. In a pandemic of a severe disease without mitigation, a huge share of the population gets sick all at once — overwhelmingly the health care infrastructure, undermining the reliability of emergency services, and overall causing a degree of devastation beyond the specific medical impact of the virus. (Information on Covid-19’s severity and fatality rate is still preliminary.)

Even with effective mitigation a lot of people get sick, but the caseload is spread out and society can continue to function.

Mitigation is essentially what the world is doing now. We are slowing the spread of the disease, both from place to place and within the hardest-hit countries. As we mitigate, we can be optimistic that warmer weather will curb the virus (something that’s plausible but scientifically unclear at this point) or that a vaccine will be ready by early 2021.

But we’re giving people false hope if we are telling them to disease is going to simply be kept at bay as a story happening in far-off places. Infection may sweep across the country with a lot of people getting sick, and doing further mitigation on an individual community level is going to be inconvenient and annoying.

Precisely because it will be annoying, however, it would be helpful for the president and his appointees to start delivering a consistent message about how to get ready so as to minimize the inconvenience.

A key thing that Americans should prepare for is the possibility that what public health professionals call “social distancing” measures may be ordered. This means literally trying to get people to spend less time in close proximity to other people.

Under America’s federal system, social distancing would likely be ordered by state or local officials rather than the federal government and as Vox’s Brian Resnick writes would entail things like “postponing or canceling mass gatherings like sporting events, concerts, or religious gatherings. It could mean closing schools (any local school board could decide to do this independently) or encouraging telework.”

School closures in particular are highly effective at slowing flu pandemics. And while it would be wildly premature to start ordering them in the United States right now, Americans should be made aware that ordering them could be prudent at some time in the reasonably near future. That means school officials should think about take-home assignments for kids and how to communicate with families during a potentially extended closure.

Cities and charitable organizations should think about the nutritional needs of low-income families that are counting on free breakfast and lunch at school to feed their kids. Parents need to think about their child care and work-from-home options, and employers need to be encouraged in the strongest possible terms to be flexible with parents.

A number of experts also suggest trying to stock up on basic medical supplies, household goods, and non-perishable food. That way if you’re healthy you can minimize the number of trips you need to take out to grocery stores where you might get sick, and if you’re sick you can stay at home and take care of yourself rather than wandering around town in search of ibuprofen.

The stock market will do what it does

There’s no getting around the fact that a big global disease outbreak is bad for business and that will be reflected in the stock market. You don’t need to paint apocalyptic scenarios to see that.

If there’s a period of time in which fewer people fly planes, stay in hotels, go to movie theaters, or eat in restaurants that is a lot of lost revenue for a lot of businesses. The vast majority of businesses will bounce back, but you can’t actually “make up for” lost sales in these industries. Empty hotel rooms, empty tables, and empty plane seats just represent hard losses.

And if people lose hours at work (or even just tips) they’ll need to cut back on their own spending elsewhere and cause problems in other sectors. More complicated stuff like disruptions to manufacturing supply chains is just more trouble on top of the basics. It’s not a great prospect, so any day there’s news that makes pandemic more likely the market is going to fall.

But the president shouldn’t flatter himself that the global economy hangs on his every word. You don’t need to have a utopian view of the efficiency of financial markets to have some confidence that major investment decisions are based on real information about real business conditions.

It’s regular people going about their lives who need to hear clear and direct communication from the president. Not a message of gloom-and-doom and defeatism, but a message of reasonable precaution where people can start taking action day-by-day now rather than finding themselves caught up in a panic if things worsen in a week or two.

But to do this, the president would need to start taking his job seriously. It’s clear that when pressed to try to put on a good show, he’s able to round up relevant credible experts from inside the government to speak to the press. But he also must listen to what they have to say, and stop contradicting them publicly.

Trump needs to tell his economics team to stop trying to coach the stock market, and start trying to think of actual policy remedies he can take to Congress — there may be a need to deliver emergency financial assistance directly to families if people have work stoppages, for example. And most of all, he needs to stop making everything about him and his political standing.

Every president ends up needing to deal with some stuff that they wish hadn’t landed on their plate. It’s the job. And the country and the world needs Trump to try harder to do it.