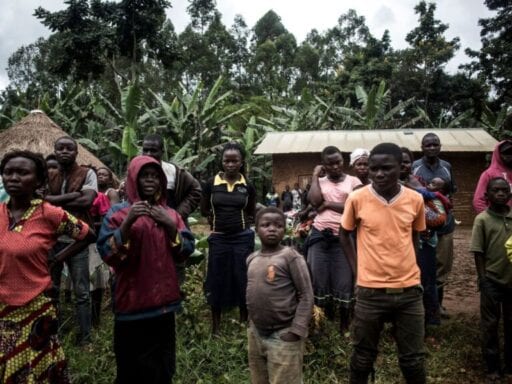 One of the largest Ebola outbreaks in history shows no signs of slowing — and the Trump administration barred US health experts who want to help at the outbreak’s epicenter in the Democratic Republic of Congo from traveling there.

Centers for Disease Control and Prevention officials were working in Beni, the city that’s ground zero for the outbreak in eastern DRC, for a few days in late August and early September. Experts say that’s an unusually short period of time for infectious disease responses; CDC deployments usually last at least four weeks, and many run for several months.

But then the White House’s National Security Council (NSC) coordinated a government review of the security risks, involving representatives from multiple government agencies and departments. The review determined that CDC officials could not return to areas where militant attacks threaten security, including Beni. Stat News first reported on October 14 that the US had pulled out of the area.

“It’s unprecedented that the CDC expertise is not at the very center of the response because that has been the pattern for the other outbreaks,” Stephen Morrison, a global health expert at the Center for Strategic and International Studies think tank in Washington, told Vox. “We have some people on CDC staff who are veterans of almost two dozen outbreaks.”

Others who have been on the ground working to curb this Ebola outbreak, which has led to 251 cases and 127 deaths so far, say they didn’t notice the CDC’s brief presence at all. A senior humanitarian official not affiliated with the Trump administration told Vox that he believed CDC experts were never in Beni.

Another non-administration senior humanitarian official added that while America has vehicles on the ground in the city, they’ve gone unused. “Those three armored US Embassy vehicles sitting in the UN parking lot in Beni for two months have never moved,” the official said.

However, CDC officials insist in conversations with Vox that its experts did work in Beni.

The relatively tepid response from the US, at a time when the outbreak is spiraling, has former CDC officials and global health experts concerned. “I do worry that in the worst-case scenario, we could have an outbreak of tens of thousands of people,” said Daniel Bausch, the director of the UK Public Health Rapid Support Team, “and complete destabilization of an already unstable region.”

This is an “unprecedented” response — in a bad way

Tom Frieden, the former head of the CDC who responded to the Ebola outbreak in West Africa from 2014 to 2016, said that “it’s unusual” and “not optimal” for CDC experts not to work at the outbreak’s epicenter.

Others agree: The DRC health workers and others who are on the ground fighting the Ebola outbreak “are not winning the game,” Morrison said. “They need to have every player they can get on the field that is competent, experienced, and able to fix these problems.”

The outbreak started in July and has worsened in recent weeks, after a spate of violent attacks on civilians by Congolese rebels temporarily halted the public health response.

A CDC spokesperson said its staff has been in Kinshasa, 1,000 miles away from the outbreak zone, since early September, “where they continue to support the response.” But even before then, CDC’s involvement in eastern DRC was uncharacteristically limited. The CDC said its director, Robert Redfield, was in Beni for one day, while other staff were there for only “several days.”

Redfield told Stat executive editor Rick Berke on Tuesday that he wants CDC officials on the ground in the DRC’s eastern region to help with the outbreak response, but that he was overruled by security concerns.

“The [Ebola responders are] at an enormous disadvantage by not having the expertise the CDC has on the ground,” he said, adding that he’d be “happy” to travel there himself to help.

As of today, the CDC has only 18 staff deployed abroad to help with the Ebola response, and not all of them are even in the DRC (outside of the outbreak’s epicenter) — they’re spread out in Uganda, Rwanda, South Sudan, and Switzerland as well.

The CDC wants to be in Beni. The administration says it’s too risky.

The argument to keep health officials out of eastern DRC boils down to this: It’s a dangerous area, and no one wants to put US officials in harm’s way.

Some experts agree. There are intensifying attacks by a militant group in the area, J. Peter Pham, an Africa expert at the Atlantic Council in Washington, told Vox. Just this past Sunday, 15 people were slaughtered in an attack there.

“US personnel are especially vulnerable,” Pham said, because in the event of an emergency, there are few US troops or equipment in the area to help. And relations between the DRC government and the US have not been warm lately.

ACAPS, an independent group that ranks humanitarian access in countries, calls the DRC “nearly inaccessible,” along with a handful of other countries including Libya, Afghanistan, and Somalia. That’s just one level below the worst global ranking of “inaccessible.”

“We are deeply concerned about continued loss of life due to armed group attacks in the region,” the State Department official continued, adding that the department is “currently engaged in an interagency deliberative process.”

Other countries and NGOs are sending people to the DRC. The US isn’t.

The response to this DRC outbreak may be unusual in part because it’s the first time Ebola has spread in an active war zone.

In eastern DRC, armed opposition groups are carrying out deadly attacks on civilians, forcing more than a million people from their homes, according to the United Nations Refugee Agency.

But while the US is staying back, officials from other countries, including Canada and the United Kingdom, as well as NGOs and humanitarian groups are sending personnel to help with the Ebola crisis. As of October 15, there were 450 responders on the ground. One of them — Scott Dowell of the Gates Foundation — was a veteran of CDC’s Ebola response unit, having helped in more than a dozen Ebola outbreaks.

“We know the response is struggling,” said Morrison, the health expert from the Center for Strategic and International Studies. “Something much more needs to happen here. … The security situation — security risks — are real, but they are manageable.”

Ron Klain, the former “Ebola czar” during the 2014-’16 outbreak in West Africa, is also concerned about the lack of an American presence.

“The fact that our country’s top experts from CDC have been relegated to the sideline by the White House shows an unwillingness to put together the right team and security partnerships to enable these talented men and women to do their jobs,” Klain told Vox.

“There’s a fear of [a] Benghazi-type situation”

In February, the Trump administration announced deep cuts to the CDC, State Department, and USAID budgets. And because there was no sign that the $1 billion pot of money Congress gave USAID and the CDC in 2015 to fight Ebola in West Africa would get replenished, that prompted these agencies to plan a retreat from 39 of the 49 foreign countries they were working in.

Just one day after a separate Ebola outbreak was declared in the DRC last spring, the head of global health security on the NSC, Rear Adm. Tim Ziemer, left the Trump administration amid a reorganization by National Security Adviser John Bolton. That means the top White House official who would lead a pandemic response isn’t there to coordinate.

The health security team Ziemer led was also dismantled. (According to the NSC press office, Ziemer’s team has been “assigned to two different offices that have a direct relationship to their mission sets.”)

When asked why the administration might not want to send people to DRC this time, especially since the US government operates in many active war zones, Morrison offered a few ideas — some political, some ideological.

“There’s a fear of making a mistake and getting clobbered by Congress. There’s a fear of [a] Benghazi-type situation, that Americans might be targeted,” he said. “We’re looking at possible change of power in the House of Representatives in another 14 days.” (In 2012, an Islamic militant group attacked US government facilities in Benghazi, Libya, leading to the deaths of four Americans.)

The broader Trump administration ideology — prioritizing American interests and letting others lead abroad — may also be a factor, Morrison said.

Got a tip? Contact Julia Belluz securely via KeyBase at jbelluz and Alex Ward via FlowCrypt.

The absurd 24 hours unleashed by one bad White House answer on Russia
China hid the severity of its coronavirus outbreak and muzzled whistleblowers — because it can
A whistleblower alleges Trump requested 2020 election interference. Pelosi still says she won’t purs...
The best argument for each of the 2020 Democratic frontrunners
Netanyahu has failed to form a government, sending Israelis back to the voting booth
How China used Facebook and Twitter to spread disinformation about the Hong Kong protests