Trump “ordered” US companies out of China. Despite claiming otherwise, he can’t do that. 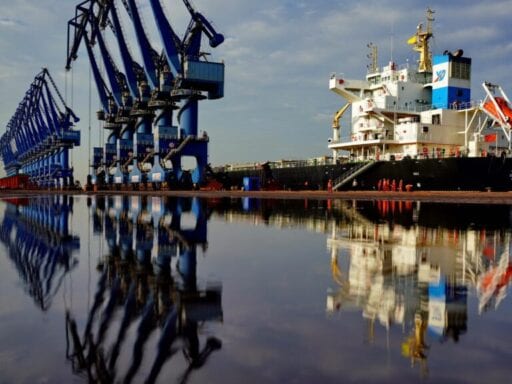 Trump says the International Emergency Economic Powers Act allows him to order companies to leave China. But the act doesn’t work that way.

In a late-night tweet on Friday, President Donald Trump defended a series of tweets from in which he “ordered” US companies to leave China and to manufacture their products in the US instead. Experts pointed out that no US president can order companies to leave a country, but shortly before midnight, Trump argued that the International Emergency Economic Powers Act legally justifies such an order:

For all of the Fake News Reporters that don’t have a clue as to what the law is relative to Presidential powers, China, etc., try looking at the Emergency Economic Powers Act of 1977. Case closed!

The president is not correct in this assertion. The Economic Powers Act allows the president of the United States to regulate commerce during a national emergency. It does not allow a president to order companies to close their factories in foreign countries, however. And as there has not yet been a national emergency declared with respect to Chinese trade, Trump’s present abilities to govern economic interactions with China are limited to measures like tariffs.

Trump’s original “order” came shortly after China announced that it planned to answer increasing US tariffs on Chinese goods by imposing new tariffs of 5 to 10 percent on $75 billion worth of US goods. In response, Trump accused China of stealing American intellectual property, and “hereby ordered” US companies to “immediately start looking for an alternative to China, including bringing your companies HOME and making your products in the USA.”

Our Country has lost, stupidly, Trillions of Dollars with China over many years. They have stolen our Intellectual Property at a rate of Hundreds of Billions of Dollars a year, & they want to continue. I won’t let that happen! We don’t need China and, frankly, would be far….

….better off without them. The vast amounts of money made and stolen by China from the United States, year after year, for decades, will and must STOP. Our great American companies are hereby ordered to immediately start looking for an alternative to China, including bringing..

….your companies HOME and making your products in the USA. I will be responding to China’s Tariffs this afternoon. This is a GREAT opportunity for the United States. Also, I am ordering all carriers, including Fed Ex, Amazon, UPS and the Post Office, to SEARCH FOR & REFUSE,….

….all deliveries of Fentanyl from China (or anywhere else!). Fentanyl kills 100,000 Americans a year. President Xi said this would stop – it didn’t. Our Economy, because of our gains in the last 2 1/2 years, is MUCH larger than that of China. We will keep it that way!

Following those tweets, which utilized the language of a formal decree, many analysts emphatically stated that a US president lacks the authority to make any such proclamation. Trump was also mocked for the tweets by many of his prominent critics. That’s why Trump cited the Economic Powers Act.

While Trump does not have the ability under that act to demand companies move where he decrees, presidents are free to set tariffs, and earlier on Friday evening, Trump targeted China with retaliatory measures of his own, including raising current tariffs on $250 billion worth of imports to 30 percent and increasing a separate tariff on another $300 billion worth of goods.

This back-and-forth is the latest in a trade war between the two countries that has stretched on for more than a year now. As Vox’s Li Zhou has reported:

Friday’s announcement builds off several earlier rounds of tariffs that Trump had previously laid out. Last fall, the US levied a 10 percent tariff on $200 billion in Chinese imports, with a focus on products that are predominately sold to businesses. This past May, the administration raised that tax to a 25 percent tariff. (Those are the goods that will now be taxed at 30 percent.) Additionally, Trump set another 10 percent tariff to go into effect on September 1 on $300 billion in Chinese goods, a tax that’s expected to affect more consumer products. (Those goods will now be taxed at 15 percent.)

China’s new action and Trump’s “order” triggered a strong reaction in the stock market: the Dow dropped more than 600 points on Friday before his announcement of his latest tariffs.

Brinksmanship between the two countries is driving fears of a new US recession and economic slowdown in China, as Vox’s Jen Kirby has reported. And the tariffs are ultimately paid by consumers, something Trump has routinely downplayed (although he did recently say he planned to postpone tariffs on consumer goods to help Christmas shoppers). Trade talks are due to resume in September, although no date has yet been set.

Friday was not the first time that President Trump has cited the International Emergency Economic Powers Act — known as IEEPA, for short — in support of his trade policy. In May, he claimed that the act gave him the authority to impose levies on Mexican imports during his dispute with that nation over border control.

Broadly speaking, IEEPA allows a US president to declare a national emergency, and to use that context to regulate commerce more closely than the separation of powers typically allows, as long as the economic actions affected are tied to interactions with nations or people associated with the state of emergency.

Congress can vote to end the state of emergency, but the president can veto such a vote. Without a veto-proof majority in Congress, this president could use this tool to take a range of economic actions against countries with whom he takes issue, from Mexico to China. It also offers any president relatively free rein in developing economic policy with nations that have long been hostile towards the US. A state of emergency has existed against Iran since the 1979 hostage crisis, for example, and that state of emergency has allowed executive branches over the past decades to levy sanctions against Iran and individual Iranians.

Trump is not the first president to seek to take new advantage of powers granted by the act. As Elizabeth Goitein, the co-director of the Brennan Center for Justice’s Liberty and National Security Program, tweeted in May, presidents have utilized the powers of IEEPA more than any other emergency power.

But while the act has been used to justify sanctions against foreign governments, political and terrorist organizations, and even, occasionally, individuals, Trump is the first president to date to use IEEPA to justify the imposition of tariffs, according to Goitein.

Were he to declare an emergency in order to limit economic interactions with China, Trump still would lack the authority to pull existing investments out of China, Jennifer Hillman, an expert on US trade policy and Georgetown law professor, told the Washington Post. However, he would be able to prevent future US funds from being transferred there and could create conditions that would make it so difficult to do business with China that firms would be heavily encouraged to relocate.

Such actions would undoubtedly negatively impact the bottom lines of those US firms, as they would be forced to reinvest in machinery, supply chain services, and training. But given the availability of low cost labor pools elsewhere in the world, they would be unlikely to return manufacturing the US; instead, they could move to countries in Southeast Asia or Africa.

All this means that no matter what Trump does, he is unlikely to be successful in pulling US companies home. Activating IEEPA would instead cause more economic uncertainty at a time recession fears are growing and almost certainly lead to further escalations in his ongoing trade war.

Protesters confront Homeland Security chief Kirstjen Nielsen at Mexican restaurant
Why the vote count early on election night could be misleading
Trump needs to worry about the stock market less, and pandemic preparedness more
VMAs 2018: 6 winners and 2 losers from a mostly lackluster show
The 4 best movies you can now watch at home
Trump’s rambling attacks on Mueller and Democrats at the Putin presser, annotated