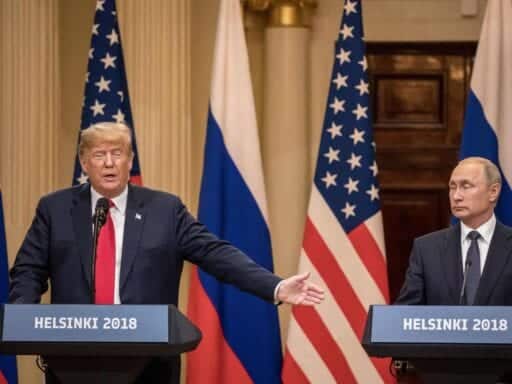 The Trump-Putin meeting reveals how Trump is killing American power.

The Trump-Putin summit was, by all accounts, a disgrace for the United States. President Trump kowtowed to Vladimir Putin, praising the Russian leader as a potential partner and casting doubt on accusations of Russian interference in the 2016 presidential election.

But the thing that made it not just disgraceful but actively terrifying was the timing.

Last week, Trump attended a NATO summit, where he met with America’s top allies in Western Europe to discuss (among other things) the threat from Putin’s Russia. Trump spent the meeting bashing American allies for not spending enough on their own defense, labeling the Western alliance “delinquent.” Shortly afterward, he gave interviews slamming the UK prime minister and labeling the European Union a ”foe.”

The contrast with the Putin press conference, in which Trump vowed to build an “extraordinary relationship” with Russia, couldn’t be clearer. In fact, the same day as the fawning Putin presser, the Trump administration brought a World Trade Organization suit alleging that the bulk of NATO allies are engaging in unfair trade practices against the United States.

We all kind of knew this is how Trump felt, since at least the campaign. But Monday’s Trump-Putin summit, and the NATO summit before it, showed that he was serious about turning those feelings into action. Trump has, in the past week, said and done several things that concretely undermine the US’s relationship with Western Europe while at the same time ingratiating himself with Putin.

We must confront the reality that the world’s worst fears about a Trump presidency are starting to come true: that America under Trump is committing what Georgetown University professor Dan Nexon calls “geopolitical suicide.” The Trump administration is ending “America” as we know it — a country that basically works to maintain a relatively peaceful status quo — and replacing it with a kind of rogue superpower, one that is willing to advance what Donald Trump sees as its interests at any cost.

Within half an hour of arriving at the NATO summit last week, Trump insulted German Chancellor Angela Merkel and forced NATO Secretary General Jens Stoltenberg to publicly sing his praises. Trump later derailed meetings with his complaints about allies not spending enough on defense, forcing Stoltenberg to call an emergency session to mediate between Trump and the rest of the alliance. Afterward, Trump claimed that NATO allies had capitulated to him and agreed to spend more on defense — a claim disputed by, among others, French President Emmanuel Macron.

That’s an extremely contentious approach to allies, one that indicates Trump’s willingness to pursue his disagreements with them. The tariffs brought earlier this year, and the WTO case brought on Monday, shows that he’s willing, perhaps even eager, to back up these complaints with concrete action. The ultimate goal appears to be to change the way America’s relationship with its allies works, both militarily and economically.

Yet during his press conference with Putin, Trump gave no indication that he was willing to pursue US grievances with Russia in a similar fashion. He didn’t mention the recent revelation that Russia had poisoned two UK civilians during a chemical weapons attack on Britain. He didn’t bring up the war in Ukraine, nor did he mention the hundreds of times NATO forces have had to scramble to meet Russian warplanes in Europe over the past several years.

At times, it felt like Trump was actively running interference for the Russian president. When a reporter asked who was responsible for poor US-Russian relations of late, Trump suggested that both sides bore some blame and that it was time to let bygones be bygones:

So Trump is willing to publicly confront US allies on defense spending, humiliating the assembled heads of state at a NATO summit. He’s willing to hit the EU with tariffs and WTO suits over (allegedly) unfair trade practices. Yet when given a massive platform to confront Vladimir Putin over a series of very real attacks on the United States and its allies, Trump actually defended the Russian leader.

There is, at least for now, no mismatch between Trump’s rhetoric and actions. The Trump administration’s policy is being brought in line with candidate Trump’s rhetoric.

When scholars of international relations analyze the strategies of great powers like the United States, they typically describe these countries’ objectives as falling into one of two buckets. Either they are “status quo” powers, nations that largely want to keep the world working the way it already does, or they are “revisionist” powers that want to upend the balance of power.

Nazi Germany is the classic revisionist power, as it sought to conquer all of Western Europe. Prewar Britain was a classic status quo power, trying to maintain its own empire and keep Hitler from gobbling up everyone else.

For the past several decades, the United States has largely behaved like a status quo power. The US has long been the world’s richest, most militarily powerful, and most diplomatically influential country on Earth; the centerpiece of its global strategy has been to maintain this position of strength. That’s why the US didn’t tear up the NATO alliance after its original reason for existing, the threat from the Soviet Union, ended; being in a tight military alliance with a number of the world’s wealthiest and most powerful countries helped the US cement its dominance and deter potential rivals from challenging American power.

Russia under Putin is perhaps the world’s most ambitious revisionist power. Putin’s goal is to make Russia the kind of world power it was during the Soviet era; he’s been willing to aggressively deploy the Russian military (in Ukraine and Syria) and intelligence services (in Western Europe and the United States) in service of this aim. This fundamental tension, between Moscow’s revisionism and Washington’s defense of the status quo, led to a collapse in US-Russia relations during the late Obama administration.

But Trump thinks like a revisionist. When he looks at the NATO alliance, he doesn’t see a network of American allies; he sees a group of freeloaders exploiting American might to slack off on defending themselves. When he looks at the global economy, he doesn’t see America’s privileged position as the world’s largest economy; he sees a once-great country laid low by foreigners exploiting its generous trade practices. Trump doesn’t want to preserve the global status quo; he wants to revise it.

This worldview puts him in objective alignment with Putin, who has similar — albeit more radical — feelings about the Western alliance. This is likely one reason Putin interfered in the US election to back Trump in the first place; it was plausible, even back in early 2016, to predict that a Trump presidency could destabilize the US-led global order in exactly the ways Putin hoped for.

This notion, that the world’s most powerful country might actually try to shake up the global order that sustains its power, is deeply stupid, which is why Georgetown’s Nexon labeled it “geopolitical suicide” in the first place. It’s so stupid, in fact, that many observers predicted that Trump couldn’t possibly act on his anti-ally and pro-Russia rhetoric once in office.

Yet the past week has shown that Trump is, in fact, serious about trying to commit superpower seppuku. The world must come to terms with the fact that for the next several years, the America they’ve come to depend on is gone — replaced with something that wants to attack everything it once stood for.

5 takeaways from Attorney General Bill Barr’s Mueller report testimony
Paid leave is incredibly popular — even with Republicans
Hospital ICUs are filling up. It’s even worse than it sounds.
Kavanaugh bragged about his clerks’ diversity. His legal record is another story.
The big difference in 2020 health plans isn’t among Democrats
Generation Z doesn’t want to hear from you