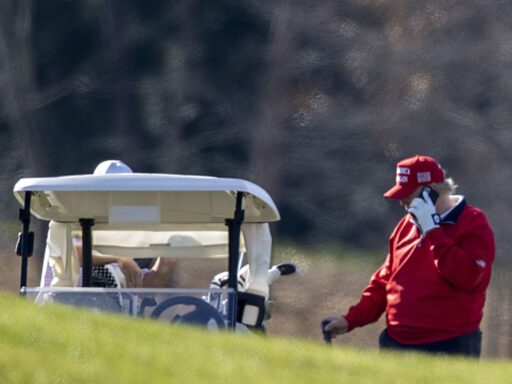 The president encouraged the unnamed election official to “find the fraud,” according to a Washington Post report.

President Donald Trump pressured a top Georgia state election investigator, who was in charge of looking into allegations of vote irregularities in the 2020 presidential election, to “find the fraud” in a late December phone call, according to a report by the Washington Post’s Amy Gardner.

The Post withheld the name of the Georgia official, citing “the risk of threats and harassment directed at election officials,” but describing the person as “investigations chief for the Georgia secretary of state’s office.”

The call took place about a week after Trump’s infamous call with Georgia Secretary of State Brad Raffensperger, in which the president attempted to pressure Raffensperger into tossing out the results of Georgia’s presidential election.

That call saw Trump telling Raffensperger, “I just want to find 11,780 votes, which is one more than we have. Because we won the state,” and both cajoling and threatening him to invent the votes it would take for Trump to have won the state, which President-elect Joe Biden carried by 11,779 votes.

During the December 23 call, Trump reportedly alternated between flattery and threats, telling the official that they’d be a “national hero” if they found any fraud that would impact the election. Neither the official nor the White House commented for the Post story.

The official was specifically investigating accusations that Cobb County election officials improperly accepted ballots with mismatching signatures on the envelopes. That ballots with improper signatures were accepted has been one of many complaints Trump and his allies have raised about the presidential election. However, the investigation concluded that those accusations were without merit.

And despite Trump’s claims otherwise, no voter fraud was found in the state of Georgia in other investigations.

Former federal prosecutor in New York, and onetime attorney on the Watergate prosecution team, Nick Akerman told the Post that Trump’s call with the election investigator could amount to election fraud, though it may be difficult to prove.

“Oh my god, of course that’s obstruction — any way you cut it,” he told the Post.

As Vox’s Ian Millhiser noted after audio from Trump’s call with Raffensperger became public, however, proving the president violated the law could hinge on making obvious the president’s state of mind at the time of the call; namely, whether he actually believed there was fraud, despite all evidence suggesting otherwise.

This was seen as hard to do for the Raffensperger call — and former Georgia prosecutor Robert James told the Post it would be even more difficult with the December 23 call, because no audio is currently known to exist from that conversation.

Trump has engaged in an attempt to subvert the 2020 election since even before Election Day. His impeachment resulted from his imploring a foreign power to intervene on his behalf and to investigate now-president-elect Joe Biden. And since Election Day, Trump has expanded his efforts to overrule American democracy and maintain his power.

First he tried filing over several dozen lawsuits seeking to throw out enough legally cast ballots in swing states like Pennsylvania, Michigan, Georgia, and Arizona to turn the election results in his favor. Having failed in that pursuit, Trump then moved on to pressuring state officials — especially in Georgia — as Cameron Peters has explained for Vox:

In at least three other battleground states that he lost to Biden — Arizona, Michigan, and Pennsylvania — Trump has directly reached out to lawmakers and other officials to urge them to help him overturn the election results in their states, potentially awarding him an unelected second term in office.

In Pennsylvania, one Republican lawmaker — state Senate Majority Leader Kim Ward — told the New York Times that she chose not to push back on Trump’s baseless fraud accusations.

As he pressured these officials, he also regularly used conspiracy theories and lies to convince supporters something was amiss with the election’s results. These efforts culminated in a speech the president gave near the Capitol on Wednesday in which he told supporters, “We’re going to have to fight much harder” against the legitimate results of the election.

During that speech, he also encouraged his supporters to protest at the Capitol itself; the violent insurrection that followed resulted in the deaths of five people, including Capitol Police officer Brian Sicknick.

On Friday, Democratic House leaders promised to bring fresh impeachment charges against Trump following the failed insurrection, in which Trump’s most fervent supporters stormed and looted the US Capitol in Washington, DC. And at least one draft of the charges suggest the president’s phone calls to Georgia election officials could be used as evidence in both the articles of impeachment and a possible Senate trial.

Over 220 Democratic House members have publicly indicated their support for the impeachment and removal of Trump, while a handful of Republicans have expressed support for his removal. Sen. Lisa Murkowski (R-AK) called for Trump’s removal from office, saying she would consider leaving the Republican Party (but not join with Democrats) if he remained as party leader.

Late Friday, outgoing Senate Majority Leader Mitch McConnell sent a memo to his fellow GOP senators laying out a potential timetable for a second Trump impeachment trial in the chamber. While Democrats hope to move swiftly to impeach in the House, McConnell noted any Senate trial would most likely be held after the president leaves office.

5 key congressional races to watch on March 17
Fox News thinks Joe Biden’s DNC speech was “a home run”
Trump’s latest tweets are an alternative world where the pandemic takes a backseat to MSNBC coverage
There is no anti-lockdown protest movement
8 takeaways from the knock-down, drag-out fight over Kavanaugh’s confirmation
You don’t have to be Catholic to enjoy Netflix’s The Two Popes