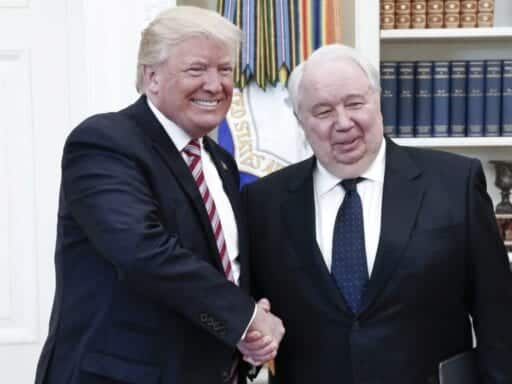 Share
Loading...
President Trump and Russian Ambassador to the United States Sergei Kislyak during the May 2017 meeting in question. | Alexander Shcherbak/TASS/Getty Images

In 2017, President Donald Trump told Russian Foreign Minister Sergei Lavrov and Russian Ambassador Sergey Kislyak he believed Russia’s interference in the 2016 presidential to be unimportant, according to a report from the Washington Post — and access to the memo describing the meeting was restricted to very few people, out of fear that the president’s comments would be made public.

Trump has repeatedly downplayed fears about Russian election interference in public. But the Post’s report, from Shane Harris, Josh Dawsey, and Ellen Nakashima, is the latest allegation that the White House has treated potentially embarrassing records about Trump’s conversations with foreign leaders with a high level of official secrecy.

That same concern is contained in a whistleblower’s report alleging the White House used a secure electronic system to classify a conversation between Trump and the Ukrainian president. That report is at the center of House Democrats’ newly launched impeachment inquiry. And it was compounded Friday night by CNN and New York Times reports that access to notes from conversations with Vladimir Putin and Saudi Crown Prince Mohammed bin Salman was similarly restricted.

It is unclear whether the memo prepared following the Russia meeting was placed in the same secure system as the Ukrainian transcript was. Three former officials reportedly said the memo was accessible only to officials with incredibly high security clearances, and that because of that, it was available only to a very, very small number of people.

These latest reports come as the president is immersed in a growing scandal about his willingness to have foreign governments — in the latest case, Ukraine — work to his benefit during an election cycle. And they also put more scrutiny both on Trump’s conversations with foreign leaders and the White House’s attempts to keep those conversations from becoming public.

What Trump reportedly said at the meeting with Russian officials

Trump reportedly made the comments on interference during the same May 2017 meeting at which he shared classified US intelligence on ISIS with Russia, causing his critics to fear both that the president could not be trusted with classified information and that he may have inadvertently revealed US intelligence sources and methods. He also said firing FBI director James Comey had relieved “pressure” from the Russia investigation.

Beyond dismissing Russia’s involvement in the 2016 elections, officials the Post spoke with said Trump also appeared to give Russia permission to meddle in the elections of other countries as well. It’s not clear exactly what he said to give this impression.

Trump is said to have blamed US-Russia tensions on journalists, saying, “I could have a great relationship with you guys, but you know, our press.”

In fact, the officials said Trump and top administration officials have often used the press to defend Russia’s actions, arguing that Voice of America — a government-funded independent news agency that broadcasts and publishes around the world — is of a kind with Russia’s digital propaganda push ahead of 2016.

Voice of America’s critics have long argued it is US propaganda, and Russia itself designated it a foreign agent, but US presidents have supported it. And unlike Russia, it has not taken out Facebook ads aimed at dividing countries on racial lines or sponsored events meant to sow chaos and division.

The Post’s report comes as other US officials and outside experts are emphasizing the risk election meddling poses to American democracy. Acting Director of National Intelligence Joseph Maguire issued a similar warning during a testimony to Congress this week, calling protecting elections his “most fundamental priority.”

Officials involved in Mueller’s Russia investigation — including the special counsel himself — have warned that Russia will continue to try to influence elections during the 2020 cycle; this week, G. Zachary Terwilliger, a US attorney who investigated election interference during the 2018 midterms, said of Russian interference in 2020, “They’re going to do it. In an open setting like this there’s not a lot I can get into, but I think it wouldn’t be irresponsible for me to say they’re definitely going to try.”

Officials who spoke with the Post said the manner in which top administration aides handled a memo of the president’s Russia meeting is reminiscent of the security around a conversation between Trump and Ukrainian president Volodymyr Zelensky that is at the center of a whistleblower’s complaint and a newly launched impeachment inquiry.

According to the whistleblower, records of the US-Ukraine phone call were removed from the system that is designated for storing such materials (and that is accessible by cabinet-level officials) and was moved to a highly secure system reserved for “code-word information,” intelligence at the highest level of classification there is in the US. The ISIS intelligence Trump shared with the Russians was concerned codeword-level information before he declassified it; phone calls with world leaders are rarely, if ever, given that classification.

The whistleblower alleges the record transfer was an attempt by top administration officials to conceal the call because there was some concern “they had witnessed the President abuse his office for personal gain.”

The Trump administration claims that this was the norm for all calls with foreign leaders. All of the officials quoted in the Post story said top aides had begun working to restrict access to records of meetings following the leaks of Trump’s calls with Mexican and Australian leaders, not only because those leaks were personally embarrassing for the president but because officials feared more leaks could lead to world leaders being unwilling to speak with the US.

But three former officials reportedly said the memo was kept under tighter control than most, and that people normally able to access such memos, even following the leaks, were not able to see the Russia notes. This would seem to suggest the administration was working to keep Trump’s comments from view.

The whistleblower alleged that the Ukraine call was “‘not the first time’ under this Administration that a Presidential transcript was placed into this codeword-level system solely for the purpose of protecting politically sensitive — rather than national security sensitive — information.”

This line has led some of the president’s critics to worry about what else might be hidden within that codeword-level system, and to question if it contains evidence of comments of even greater concern than those the president made on the Ukraine call.

It’s not clear if the codeword system was used for the Ukraine call, or if access was restricted in some other way. But the fact that Trump reportedly told top Russian officials their country’s interference in a presidential election was not a big deal and that his aides reportedly worked to conceal that statement will do little to quiet those critics.

Burt Reynolds, ’70s icon and movie star, is dead at 82
A second Covid-19 vaccine has been recommended for emergency use by FDA advisers
Tinder may not get you a date. It will get your data.
Netflix and streaming TV were the biggest winners of the 2020 Emmy nominations
Why Sacramento is still protesting Stephon Clark’s death, one year later
11 compelling documentaries to watch for this fall