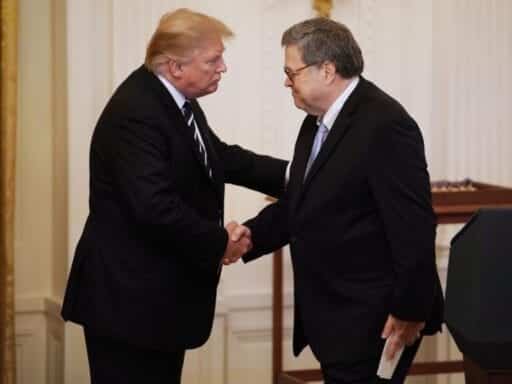 Trump denies it, but it looked like he wanted the attorney general to clean up his mess, again.

The Washington Post reported Wednesday that Trump had wanted Barr to hold a press conference declaring the president had done nothing wrong in his July 25 phone call with Ukrainian President Volodymyr Zelensky in which Trump pressured the leader to investigate Joe Biden and his son.

Trump, however, vehemently denied the story in a series of tweets on Thursday morning. “The degenerate Washington Post MADE UP the story about me asking Bill Barr to hold a news conference,” Trump tweeted. “Never happened, and there were no sources!”

But according to multiple reports, Trump wanted Barr to exonerate him shortly after the White House released a readout of the Trump-Ukraine call. It’s not clear from the reporting how direct Trump’s request that Barr hold a press conference might have been. According to the Post, the request “traveled from the president to other White House officials and eventually to the Justice Department.” It added that the president has “mentioned Barr’s demurral” in recent weeks.

Trump has described that July 25 call as “perfect” and called on people to “Read the Transcript!” — despite the fact that the call readout (which clearly states right there in the text that it isn’t a verbatim transcript) clearly shows Trump asking Ukraine to investigate his political rivals. That’s also been corroborated by a lot of damning testimony from witnesses.

But although Barr ultimately declined to hold a press conference as the president wanted, the Justice Department did basically release a statement that said Trump didn’t do anything wrong on the call, at least in regards to a campaign finance violation.

“The Department’s Criminal Division reviewed the official record of the call and determined, based on the facts and applicable law, that there was no campaign finance violation and that no further action was warranted,” spokesperson Kerri Kupec said in September. “All relevant components of the Department agreed with this legal conclusion, and the Department has concluded the matter.”

Trump referred to this on Thursday, tweeting that “The Justice Department already ruled that the call was good.”

Bill Barr did not decline my request to talk about Ukraine. The story was a Fake Washington Post con job with an “anonymous” source that doesn’t exist. Just read the Transcript. The Justice Department already ruled that the call was good. We don’t have freedom of the press!

Barr, and the Justice Department, were also reportedly involved in the decision to release the July 25 call transcript, which, despite being Trump’s No. 1 reading recommendation, is pretty damning and helped accelerate the impeachment inquiry.

Barr himself came up in the July 25 call. While proposing investigations into the Bidens, Trump tells Zelensky that two people will get in touch with him — his personal attorney, Rudy Giuliani, and Barr. “I will have Mr. Giuliani give you a call and I am also going to have Attorney General Barr call and we will get to the bottom of it,” Trump says.

Depositions in the House’s impeachment inquiry have revealed that Giuliani was running something of a shadow foreign policy to get Ukraine to investigate the Bidens. But Barr’s role was less clear, and a Justice Department spokesperson said after the call transcript was released, “the President has not spoken with the Attorney General about having Ukraine investigate anything relating to former vice president Biden or his son.”

A report in the AP in September said that Barr was “surprised and angry” to be mentioned alongside Giuliani.

So is Barr in the doghouse now? Probably not.

Back during the Mueller investigation, Trump frequently complained that then-Attorney General Jeff Sessions wasn’t doing enough to protect him. He never forgave Sessions for recusing himself from the Russia investigation, which ultimately led to the appointment of special counsel Robert Mueller.

In contrast, Barr has defended the president at every turn, most notably in clearing the president of obstruction of justice after Mueller declined to come to a conclusion on that question. Barr is also personally overseeing a review of the Russia investigation — which is now a criminal inquiry — that’s looking into allegations of bias and overreach by law enforcement when they opened the probe into Trump’s campaign during the 2016 election.

So this potential Ukraine press conference dustup aside, it’s unlikely that Barr will find himself on the outs with Trump in the way Sessions did. Even if Barr and Trump haven’t been exactly aligned on Ukraine, the Justice Department did quickly clear the president of a campaign-finance violation — a decision many are still questioning. That has given Trump, and his defenders, cover to say that the president did nothing illegal or wrong.

And Barr is continuing his scrutiny of the Russia probe. Barr has repeated allegations from the president’s defenders that law enforcement illegally “spied” on the Trump campaign, and has gone on a world tour to chase down some of those theories.

The inspector general — the Justice Department’s independent watchdog — is expected to release its report on the origins of the Russia investigation in the coming weeks, and it very well may contain findings that bolster Barr and the president.

And that, if it happens, will be a boon to the president in his impeachment fight — and could certainly give Barr another chance for a televised news conference to make up for the one he chose not to give on Ukraine.

A faint, beautiful interstellar comet is whizzing by the Earth
Who is going to win the 2020 Iowa caucuses, according to the polls
An Amazon warehouse worker in NYC has coronavirus. They probably won’t be the last.
How Covid-19 can be more and less deadly than we knew
Most investors don’t want to touch media anymore. But Axios is going to raise another $20 million.
The 4 Democrats running for president and everything else you should know about 2020