Trump responds to Apple’s warning tariffs will increase prices: Build more in the US 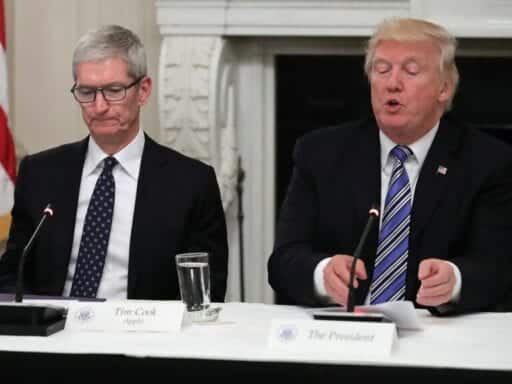 All that time Tim Cook spent trying to get in Trump’s good graces didn’t quite work according to plan.

Apple likes President Donald Trump’s tax cuts. His tariffs, not so much.

Trump on Saturday lashed out at the Cupertino, California-based company on Twitter in response to its warning earlier this week that his administration’s proposed $200 billion worth of tariffs on Chinese goods would hurt its business. Apple said in a letter to the United States Trade Representative on Wednesday that the tariffs would harm growth and competitiveness and cause it to raise prices on US consumers for products such as the Apple Watch, its smart watch, and AirPods, its wireless headphones. The letter was first flagged by Bloomberg.

The president hit back over the weekend, saying that the iPhone maker can get around the tariffs if it were to just build more factories in the United States. “Make your plants in the United States instead of China,” he wrote on Twitter. “Start building new plants now. Exciting! #MAGA”

Apple prices may increase because of the massive Tariffs we may be imposing on China – but there is an easy solution where there would be ZERO tax, and indeed a tax incentive. Make your products in the United States instead of China. Start building new plants now. Exciting! #MAGA

Trump has already slapped tariffs on billions of dollars of Chinese goods, prompting retaliation from China, and he’s threatened tariffs on an additional $200 billion worth of Chinese goods. Apple in its letter to the USTR warned that the proposed tariff list “covers a wide range of Apple products and the products used in our US operations” and listed items that would be affected.

“Tariffs increase the cost of our US operations, divert our resources, and disadvantage Apple compared to foreign competitors,” Apple wrote, adding that tariffs “will ultimately reduce the economic benefit we generate for the United States.”

As the Washington Post’s Tony Romm notes, Apple CEO Tim Cook for months has been personally lobbying Trump on tax and trade, even dining with Trump and the first lady at the White House last month.

While Apple may be on the losing end of Trump’s trade policies, it is a major beneficiary of the tax bill he signed last year, which slashed the corporate tax rate to 21 percent from 35 percent and lowered the tax rate for Apple and others to bring back the billions of dollars in profits they had previously stashed overseas.

Apple has rewarded both its shareholders and the Republican Party’s PR machine: it announced a $100 billion stock buyback program in the spring and in January said it would make a $350 billion “contribution” to the US economy. (As the Verge pointed out at the time, it was only clear where about $75 billion would be directed.)

Trump, who on the 2016 campaign trail briefly called for a boycott of Apple, has on multiple occasions claimed that Apple is building new plants in the United States, even though the company has not made any such announcement.

In July 2017, Trump told the Wall Street Journal that Cook had promised him Apple would build “three big plants, beautiful plants” in the US. In July of this year, Trump in a speech on the White House lawn made the claim again that Apple was building new plants in the US, saying it was “made possible by the new tax cut and reform plan.”

Apple has announced no plans to do so. And even if the company did build more domestically, it’s possible that would cause the prices of its products to go up as well, due to labor and supply chain costs. If it were to bring with it more jobs, that could be a good trade-off, but it’s not clear how it would pan out.

To be sure, Apple could absorb some extra costs of the tariffs itself before passing them on to consumers: As CNBC points out, Apple earned $11.5 billion on sales of $53.5 billion and $243 billion in cash and equivalents on the books last quarter. Its annual revenue is more than $200 billion a year.

Choose your quarantine meme house
Starbucks hops on the bandwagon and eliminates plastic straws
Dwyane Wade’s unflinching support of his trans daughter is a turning point
Cyclist gives Donald Trump the middle finger
It looks like the debate may have given Elizabeth Warren a slight boost in Nevada
Covid-19 vaccine trials are showing promising results. A lot can still go wrong.