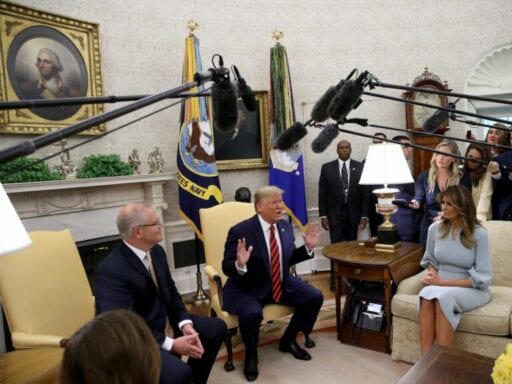 Trump denigrated the whistleblower as “a partisan” — but later said he’s not even sure who he or she is.

President Donald Trump’s initial public comments about revelations that his conversations with Ukrainian President Volodymyr Zelensky are the subject of a whistleblower complaint regarding possible abuse of power were incoherent in multiple respects.

He attempted to suggest that the whistleblower in question had political motives by describing them as “a partisan” — even though he later said he doesn’t know who he or she is. He insisted the conversations he had with Ukrainian officials that are now under scrutiny were “totally appropriate” and “beautiful,” and later said he can’t remember them. He said he hadn’t read the whistleblower complaint, but then in the next breath claimed “everybody’s read it, they laugh at it.”

And, in any event, the nation’s top elected official said “it doesn’t matter what I discuss” with foreign leaders.

Trump describes whistleblower who sounded alarm about his interactions with Ukraine as “partisan.” A minute later, he says, “I don’t know the identity of the whistleblower.”

“it was a totally appropriate conversation. It was actually a beautiful conversation,” he adds. pic.twitter.com/an57Vq7x2R

Trump’s comments came hours before the Wall Street Journal published a report indicating that during a single July conversation, Trump pressured Zelensky “about eight times” to work with his lawyer, Rudy Giuliani, on an investigation into Democratic president frontrunner Joe Biden’s dealings with Ukraine back when Biden was vice president — the goal at least in part being to tarnish Biden with a corruption scandal.

Notably, during his media availability on Friday, Trump didn’t deny that he wants to see an investigation into Biden.

“Somebody ought to look into Joe Biden’s statement, because it was disgraceful,” Trump said, alluding to unsubstantiated claims that Biden’s 2014 statements about wanting to crack down on corruption in Ukraine were linked to his son’s business dealings in the country. “Where he talked about billions of dollars that he’s not given to a certain country unless a certain prosecutor is taken off the case.”

Trump then turned his fire on a familiar target: the media.

“Our media has become the laughingstock of the world,” Trump said, before going on downplay the entire scandal as “another media disaster” and insulting the assembled reporters.

“The media of our country is laughed at all over the world now. You’re a joke,” he said.

TRUMP: “Our media has become the laughingstock of the world … the media of our country is laughed at all over the world now. You’re a joke.” pic.twitter.com/2n2eNRhanO

But this particular scandal did not originate with the media or with Democratic operatives. It originated with a member of the US intelligence community filing a whistleblower complaint with the intelligence community inspector general just over a month ago about Trump’s communications with Ukraine — one that the inspector general found to be “urgent” and “credible.” But the Trump administration, in possible violation of federal law, is doing everything possible to prevent the inspector general from going public with details.

Details are trickling out nonetheless, and the revelation that Trump pressured a foreign government to investigate one of his political rivals appears to be a textbook abuse of power. During the Friday media availability, Trump characterized his discussions with Zelensky as “totally appropriate” and “beautiful.” But he later seemed to contradict himself by saying he can’t recall the conversation or conversations at the heart of the whistleblower’s complaint.

“Which conversation? Well, figure it out. You’re supposed to be the media,” Trump said, in response to a question about the conversation in which he reportedly made some sort of shady “promise” to the Ukrainian government. “I really don’t know. I don’t know.”

Furthermore, Trump’s comments on Friday about the Ukraine scandal being nothing more than a “political hack job” are directly contradicted by the fact that the inspector general in question was appointed by Trump — a reality pointed out in a statement from the Democratic chairs of the House intelligence, judiciary, foreign affairs, and government reform committees.

Schiff/Nadler/Engel/Cummings: The President’s claim that the whistleblower’s complaint is a ‘political hack job’ made by a ‘partisan person’ directly contradicts the conclusions of the independent Inspector General—who was appointed by the President himself

In short, if Trump’s statements on Friday didn’t come across as particularly coherent or reassuring, that’s because they weren’t. As Giuliani’s disastrous interview with CNN’s Chris Cuomo on Thursday evening revealed, it’s hard to defend the indefensible. Republicans, however, are doing their best.

Republicans are defending Trump before the facts are even in

Revelations that Trump may have tried to strong-arm the Ukrainian government into launching a politically motivated investigation of Biden sparked new calls for impeachment hearings from Democratic senators and representatives (albeit not from House Speaker Nancy Pelosi), and you might be tempted to think that Trump did himself no favors among Republicans with his unconvincing media availability on Friday.

Republicans wasted no time defending the president. On Fox News, Sen. Josh Hawley (R-MO) acknowledged that he’s “not sure … what the actual facts are,” but dismissed the whole story anyway.

“It looks to me like another deep state attack,” he said.

On Fox News, @HawleyMO dismisses a whistleblower sounding the alarm about Trump’s dealings with Ukraine as “another deep state attack.” pic.twitter.com/q7B1lvKQgF

“You will never see the attacks stopped,” she said. “The left will not give up because they cannot even accept the fact that they lost.”

This rush to defend Trump — before the facts are even known, and while Trump struggles to defend himself — is more evidence that there appears to be no limit to the possible abuses of power Republican members of Congress are willing to tolerate. Trump’s comments, meanwhile, indicate he’s not particularly concerned about coming up with coherent talking points to defend himself.

New surveillance AI can tell schools where students are and where they’ve been
Michael Bloomberg’s 2020 presidential campaign and policy positions, explained
The Trump administration says it must lock up families to keep them together. That’s not true.
Biden turned out a new, key group on Tuesday: working-class white voters
Sharp Objects shows its teeth in a killer season finale
The Trump administration could soon allow doctors to discriminate against LGBTQ people