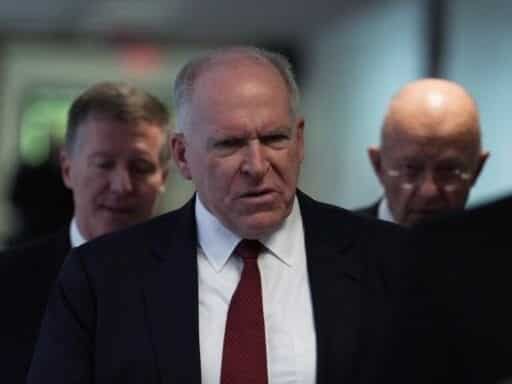 The former CIA director went on TV and Twitter to criticize the president on Tuesday.

White House press secretary Sarah Sanders, reading a statement from the president during the daily press briefing on Wednesday, cited Trump’s “constitutional responsibility to protect the nation’s classified information” as justification for his decision to revoke Brennan’s clearance.

“Mr. Brennan has recently leveraged his status as a former high-ranking official with access to highly sensitive information to make a series of unfounded and outrageous allegations — wild outbursts on the internet and television — about this administration,” Sanders said, reading the president’s statement.

“Mr. Brennan’s lying and recent conduct, characterized by increasingly frenzied commentary, is wholly inconsistent with access to the nation’s most closely held secrets and facilitates the aim of our adversaries, which is to sow division and chaos,” she continued.

The Trump administration announced back in July that it was considering rescinding the security clearances of top law enforcement and intelligence officials — including former Director of National Intelligence James Clapper, and former CIA Director and NSA Director Michael Hayden — all of whom happen to be critics of the administration.

Brennan, who served as CIA director under Barack Obama, is the first from the list to have had his clearance revoked.

Brennan has been an outspoken critic of Trump for months. In November 2017, Brennan said Trump was being “played” by Putin; in July 2018, after Trump’s meeting with Putin, he called the president himself “nothing short of treasonous”; and earlier this month he rebuked the president’s comments about Lebron James. And just this week, Brennan slammed Trump on Twitter over his offensive tweet calling Omarosa Manigault-Newman a “lowlife” and a “dog.”

It’s astounding how often you fail to live up to minimum standards of decency, civility, & probity. Seems like you will never understand what it means to be president, nor what it takes to be a good, decent, & honest person. So disheartening, so dangerous for our Nation. https://t.co/eI9HaCec1m

This tweet seems to have been what finally pushed the president’s ire over the edge.

Indeed, the printed statement the White House initially released to the press about Brennan was actually dated July 26 — suggesting that Trump may have drafted the statement a few weeks ago and was merely waiting for the opportune moment to actually pull the trigger. (The White House later released a second version that was undated.)

Brennan responded to the president’s move with a statement on Twitter saying this “action is part of a broader effort by Mr. Trump to suppress freedom of speech & punish critics.”

This action is part of a broader effort by Mr. Trump to suppress freedom of speech & punish critics. It should gravely worry all Americans, including intelligence professionals, about the cost of speaking out. My principles are worth far more than clearances. I will not relent. https://t.co/TNzOxhP9ux

The president’s statement also hints that more clearance revocations may be on the way:

As part of the review, I am evaluating action with respect to the following individuals: James Clapper, James Comey, Michael Hayden, Sally Yates, Susan Rice, Andrew McCabe, Peter Strzok, Lisa Page, and Bruce Ohr. Security clearances for those who still have them may be revoked, and those who have already lost their security clearances may not be able to have them reinstated.

A number of the people listed, including Strzok and Page, are central figures in Trump supporter conspiracy theories about the Mueller investigation.

Comey, the former FBI director, and McCabe, former FBI deputy director, have previously said they don’t actually have security clearances, though, as Sanders indicated in the statement, Trump may try to prevent such individuals from being able to obtain clearances in the future.

Trump’s extraordinary decision to revoke Brennan’s security clearance — and possibly do the same for other top officials who are openly critical of the administration — probably won’t do much practically. But it sets a chilling precedent for both free speech and the peaceful transition of power between administrations.

As Trump himself noted in the statement, intelligence officials and other government employees are usually allowed to keep their security clearances as a professional courtesy — in part because it gives them access to often lucrative consulting gigs after their government service has ended. It’s also a benefit (or at least should be) to the Trump administration, as they can call on former officials to gather expertise.

But according to Trump, “any benefits that senior officials might glean from consultation with Mr. Brennan are now outweighed by the risks posed by his erratic conduct and behavior.”

The statement cites Brennan’s 2014 lie to Congress about CIA employees spying on the US Senate as an example of his erratic behavior. (Although the administration had no qualms touting Brennan’s endorsement of its controversial CIA director pick Gina Haspel when it served their aims).

But the bulk of Trump’s statement seemed to point to a grievance over Brennan’s blunt commentary about the president. Punishing a former official because he doesn’t agree with policies, or a president’s behavior, or frenzied tweets, sets a chilling precedent — especially because there’s little to check Trump’s power in this area.

“There are potentially legitimate reasons to revoke the security clearances of some of these individuals who have been named. But that would be on objective, substantive grounds challenging their trustworthiness,” Zaid said. “Just because they’re politically opposed to the president does not impact their trustworthiness at all.”

Sanders, when asked if the president would revoke clearances for anyone who criticized him on TV, said the decisions would be made on a “case-by-case basis.”

James Clapper, the former Director of National Intelligence who’s also been openly critical of Trump, told CNN on Wednesday that he “didn’t plan to stop speaking” despite what happened to Brennan.

“Will the republic stand or fall on whether John retains his access to classified information, or mine or any others that were named? Of course not,” Clapper said. “The larger issue here, to me, has been infringement on First Amendment rights. And I think people ought to think seriously about that.”

Michael Hayden, the former NSA director, said much the same: “With regard to the implied threat today that I could lose my clearance, that will have no impact on what I think, say or write.”

You can read the president’s full statement below: