Trump said he might fire Fauci after the election, but “don’t tell anybody” 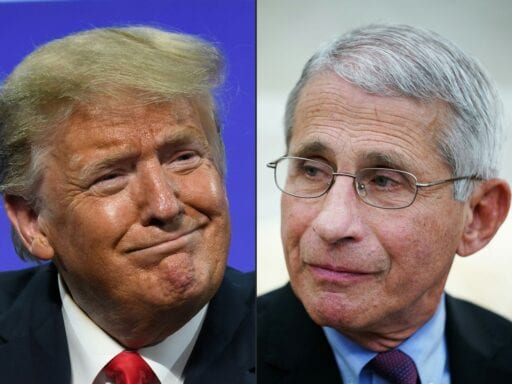 With 100,000 daily coronavirus cases in the US, Trump said he wants to fire Anthony Fauci.

No matter what happens on Election Day in the US, two things will remain constant: the country’s nearly 100,000 daily cases of Covid-19 aren’t going away overnight, and Donald Trump will still be president — and in charge — until January. And at a rally in Florida late Sunday night, Trump suggested that he would fire Dr. Anthony Fauci, the government’s leading infectious disease expert, after the election.

The president made the comment after thousands of supporters in Opa-locka, Florida, broke out into a “Fire Fauci” chant in response to Trump’s false claims that the pandemic is getting better.

After listening to the chant for several seconds, Trump said, “Don’t tell anybody, but let me wait until a little bit after the election.”

Wow — a “Fire Fauci!” chant at the Trump rally

“Let me wait until a little after the election,” Trump replies pic.twitter.com/bRHLqzzcRF

Firing one of the country’s leading coronavirus experts while the pandemic rages on — at least 31 states set a single-day record for new cases on Halloween, CNN reported — doesn’t seem like the smartest idea, or a particularly compelling closing argument for the president’s reelection. But it does align with Trump’s strategy of repeating, without merit, that the national news media is overblowing the threat. At campaign stops, Trump has been incorrectly claiming that the US is “rounding the turn” on the pandemic. He even did so at rallies Saturday, as it became clear that the US had broken a world record for the most new cases in a single day last Friday. And he has maintained that things are getting better despite being hospitalized in early October after contracting Covid-19.

The suggestion that Trump might fire Fauci also comes in the wake of Fauci publicly criticizing the administration’s handling of the disease as well as offering praise for Democratic presidential nominee Joe Biden’s approach to the pandemic.

“We’re in for a whole lot of hurt. It’s not a good situation,” Fauci told the Washington Post, saying that he and the coronavirus task force have seen their roles diminished and that he has not spoken to the president since Trump’s hospitalization. While he had no words of praise for Trump’s approach to the pandemic, Fauci said Biden “is taking it seriously from a public health perspective.”

Fauci, who has been a government employee for over 50 years, has employment protections — Trump can’t fire him directly. But on October 21, Trump issued an executive order, as Politico’s Dan Diamond pointed out, that chip away at those protections. The order details that the administration and its agencies need to be able to weed out “poorly performing employees.”

“Agencies need the flexibility to expeditiously remove poorly performing employees from these positions without facing extensive delays or litigation,” the executive order reads. Beyond this new order, Trump could direct a political appointee to terminate Fauci, who is currently the director of the National Institute of Allergy and Infectious Diseases. Fauci’s immediate supervisor, National Institutes of Health director Dr. Francis Collins, has said he would be against firing Fauci.

Trump may not be able to get rid of Fauci himself, but is reportedly thinking deeply about a staffing shuffle should he win a second term. Politico reported on Sunday that Trump plans to dump cabinet members who “contradicted” him in his messaging and plans about the pandemic.

The police shooting of Marcellis Stinnette and Tafara Williams, an unarmed Black couple, explained
The inside story of Netflix, the tiny tech company that took over Hollywood
BuzzFeed’s Jonah Peretti on why he bought HuffPost and why the New York Times can’t be “the paper of...
The best $29.95 I ever spent: A lumbar pillow
Climate got more time in the Democrats’ first 2020 debate than in all 2016 debates combined
How Rihanna became one of the most influential people in fashion