Trump said “nobody could have predicted” coronavirus. White House memos show his advisers did. 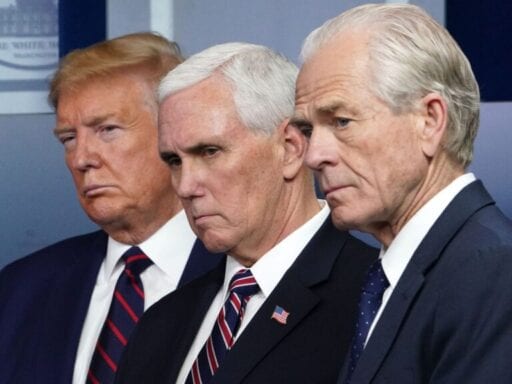 Trump was warned the coronavirus could kill 2 million Americans. Three days later, he said it was going away.

On Tuesday, Axios published internal White House memos that make the statements from President Donald Trump downplaying the coronavirus before it became a full-blown crisis look even more willfully ignorant.

A February 23 memo labeled as a “MEMORANDUM TO PRESIDENT” sent through the National Security Agency, then-acting Chief of Staff Mick Mulvaney, and the Covid-19 task force warns in its very first sentence that “[t]here is an increasing probability of a full-blown COVID-19 pandemic that could infect as many as 100 million Americans, with a loss of life of as many as 1-2 million souls.”

Three days later, however, Trump held a news conference in which he suggested the coronavirus would soon go away on its own in the United States.

“When you have 15 [coronavirus cases], and the 15 within a couple of days is going to be down to close to zero, that’s a pretty good job we’ve done,” Trump said.

3 days later, Trump said, “we’re going to be pretty soon at only 5 people, and we could be at just 1 or 2 people over the next short period of time.” pic.twitter.com/0O6IouQhJJ

On February 27, as the US confirmed case count stood at 15, Trump went even further, claiming of the coronavirus that “one day — it’s like a miracle — it will disappear.” Needless to say, the memo that was addressed to him four days earlier made no allowance for the miraculous.

The February 23 memo doesn’t identify its author, but Axios reports that it was written by White House trade adviser Peter Navarro. The document presciently advises the federal government to immediately invest $618 million in ventilators and personal protective equipment (PPE) for health care workers.

“This is the first line of defense for our health care workers and secondary workers in facilities such as elder care and skilled nursing,” the memo says. “Key items include N-95 facemasks, goggles, gloves, Tyvek suits, ventilator circuits and Positive Air Press Respirators (PAPRs).”

Fast-forward 10 weeks and there are now hundreds of thousands of confirmed coronavirus cases in the US and more than 10,000 dead. Shortages of PPE and ventilators have become major problems and a source of tension between Trump and state governors who have called on him to do more to obtain supplies.

But instead of heeding the February 23 warning that major investments in PPE and ventilators were needed, Trump dithered — and not just until there was a sudden uptick in confirmed cases in early March. The Associated Press’s Michael Biesecker reported on Sunday that a review of federal purchasing contracts “shows federal agencies largely waited until mid-March to begin placing bulk orders of N95 respirator masks, mechanical ventilators and other equipment needed by front-line health care workers.”

“By that time, hospitals in several states were treating thousands of infected patients without adequate equipment and were pleading for shipments from the Strategic National Stockpile,” Biesecker added. When asked about the federal government’s slow response, Trump’s line has been that the states should have done more on their own.

Trump was warned the coronavirus could spiral out of control in January, then told people “we think we have it very well under control”

The February 23 memo was not the first White House document to warn that the coronavirus could be really bad. Axios also published a January 29 memo also authored by Navarro that advised “an immediate travel ban to China” and sounded the alarm about data indicating Covid-19 spreads more easily from person to person than the H1N1 flu or SARS. The memo estimated as many as 18 million Americans could be infected by the coronavirus, with 543,000 deaths.

“The lack of immune protection or an existing cure or vaccine would leave Americans defenseless in the case of a full-blown coronavirus outbreak on US soil,” the January 29 memo, which was addressed to the National Security Council, says. “The lack of protection elevates the risk of the coronavirus evolving into a full-blown pandemic, imperiling the lives of millions of Americans.”

During a rally the next day in Des Moines, however, Trump downplayed the coronavirus threat, saying, “We think we have it very well under control.”

“We have very little problem in this country at this moment — five [cases] — and those people are all recuperating successfully. But we’re working very closely with China and other countries, and we think it’s going to have a very good ending for us … that I can assure you,” he added.

Trump did move to restrict travel from China on February 2. But by then, the virus was already spreading inside the borders of the United States. And in the days that followed, Trump continued to make public statements that gave Americans a false sense of security.

“You know, a lot of people think that goes away in April with the heat,” he claimed on February 10.

During a news conference on March 17, Trump tried to pretend that he took the coronavirus seriously from the jump.

“I felt it was a pandemic long before it was called a pandemic,” he said.

Trump, who not a month ago characterized Democratic criticism of the coronavirus response as a “hoax,” now claims, “I felt it was a pandemic long before it was called a pandemic.” pic.twitter.com/6GTpZ59b75

Then, during a Fox & Friends interview on March 30, Trump said of the coronavirus pandemic that “nobody could have predicted something like this.” But the memos indicate Trump’s own advisers had not only anticipated it but tried to warn him about it.

The Navarro memos reveal the sheer brazenness of Trump’s attempt to rewrite history. Instead of taking action, Trump engaged in wishful thinking until the spread of the virus was so out of control that many major population centers in the country were forced into a state of virtual lockdown. Hospitals, meanwhile, continue to struggle with resource shortages that the federal government did nothing to alleviate during the crucial period between January and early March.

Now, instead of misleading suggestions that the coronavirus will go away on its own, Trump has moved the goalposts dramatically. No longer are 15 cases a “good job” — instead, it’s a far more ghastly number.

Is your cellphone giving you cancer? A comprehensive guide to the messy, frustrating research.
Fox News devised a way to cover the impeachment trial without covering it at all
Pete Buttigieg’s favorite author would maybe hate Pete Buttigieg
Tens of thousands rise up against the coup in Myanmar
As He Questions His Opponent’s Health, Trump Finds His Own Under Scrutiny - The New York Times
The weekend in startling impeachment news, explained