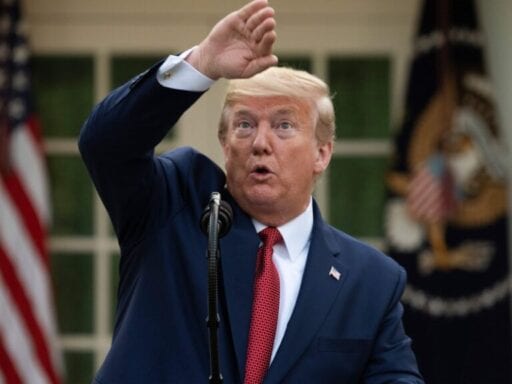 Barely a month ago, Trump claimed the coronavirus would go away on its own. Then he said it paled in comparison to the 2009 H1N1 flu outbreak, which killed about 12,500 Americans. Now he’s saying that the estimates showing Covid-19 could kill 100,000 Americans — roughly equivalent to two Vietnam Wars or 38 September 11 attacks — actually reflect how effective he’s been.

During a news conference on Sunday, Trump said that a final US coronavirus death toll somewhere in the range of 100,000 to 200,000 people would indicate that his administration has “done a very good job.”

“You’re talking about 2.2 million deaths,” Trump said, referring to an Imperial College study that identified 2.2 million people as the high end of how many Americans could die if no measures were taken to slow the spread of coronavirus. “So if we can hold that down, as we’re saying, to 100,000, it’s a horrible number, maybe even less, but to 100,000, so we have between 100 [thousand] and 200,000, we altogether have done a very good job.”

The president acknowledging that as many as 200,000 people could die from the coronavirus is a somewhat stunning admission — especially considering that as recently as last week, Trump was pushing an absurdly dangerous talking point about relaxing social distancing in time for churches to be packed on Easter. But it also previews the sort of argument he’s preparing to make during the upcoming election about how his handling of the crisis was a success — no matter the outcome, and regardless of his past statements.

It’s good that the president is finally being realistic, but it doesn’t change the fact that he spent crucial weeks dithering and downplaying

Trump’s comments on Sunday indicate that experts have talked some sense into him since last week. During an appearance on CNN earlier in the day, Dr. Anthony Fauci, director of the National Institute of Allergy and Infectious Diseases, cited the same range of expected deaths as Trump did hours later.

Dr. Anthony Fauci says there could potentially be between 100,000 to 200,000 deaths related to the coronavirus and millions of cases. “I just don’t think that we really need to make a projection when it’s such a moving target, that you could so easily be wrong,” he adds. #CNNSOTU pic.twitter.com/F2MOHY3xl4

But Trump’s newfound realism represents a dramatic departure from not only what he was saying last week but also (and perhaps more importantly) from what he was saying during the crucial period in February and early March, when the virus was spreading largely undetected, in part because of his government’s failure to quickly devise an effective and widely available coronavirus test.

On February 26, for instance, Trump noted that there were only 15 known cases of coronavirus in the country, and claimed that “within a couple of days is going to be down to close to zero, that’s a pretty good job we’ve done.” Two days later, he said, “It’s going to disappear. One day, it’s like a miracle, it will disappear.” There are now more than 122,000 confirmed cases of coronavirus in the country.

On March 9, Trump posted a tweet suggesting that the measures state governments have now taken to shut down economic activity in hopes of slowing the spread wouldn’t be necessary, because tens of thousands of people die from the flu each year (including more than 30,000 in the 2018-19 season) and yet “[n]othing is shut down, life & the economy go on.”

Then, during a press conference four days later, Trump compared his government’s handling of the coronavirus favorably with the Obama administration and H1N1, saying “Interestingly, if you go back — please — if you go back to the swine flu, it was nothing like this. They didn’t do testing like this. And actually, they lost approximately 14,000 people. And they didn’t do the testing. They started thinking about testing when it was far too late.”

Trump’s claim about the number of Americans who died from H1N1 during 2009 and 2010 is false. A CDC study conducted years after the fact found that about 12,500 died. And ProPublica recently detailed how Obama’s administration presided over the CDC’s development of an H1N1 test that became available for use just two weeks after the first case was detected.

Trump, by contrast, oversaw a botched CDC test development process that put the US behind the curve when it comes to detecting the spread of coronavirus. He absurdly tried to blame Obama for this on Sunday.

“The biggest problem was the test didn’t work. That was not from us. That has been there a long time” — here’s Trump trying to blame Obama for faulty coronavirus tests that were developed by the CDC earlier this year pic.twitter.com/v2zXukCpwf

Of course, Trump lying about Obama is no surprise. But what’s important is that instead of leveling with Americans about the coronavirus threat in a manner that likely would’ve prompted many to take greater precautions, Trump kept downplaying it while the virus spread and his government bungled the effort to start testing people. It’s good he’s finally being realistic, but the reality is we’ve now at the point where an outcome in which 100,000 Americans die sounds like getting off easy.

Consider South Korea, by contrast. South Korea and the United States reported their first coronavirus cases on the same day — January 20. But while Trump was trying to wish the virus away, South Korean officials sprung into action. The Guardian details the difference between the South Korean and US responses:

Within a week of its first confirmed case, South Korea’s disease control agency had summoned 20 private companies to the medical equivalent of a war-planning summit and told them to develop a test for the virus at lightning speed. A week after that, the first diagnostic test was approved and went into battle, identifying infected individuals who could then be quarantined to halt the advance of the disease.

Some 357,896 tests later, the country has more or less won the coronavirus war. On Friday only 91 new cases were reported in a country of more than 50 million.

The US response tells a different story. Two days after the first diagnosis in Washington state, Donald Trump went on air on CNBC and bragged: “We have it totally under control. It’s one person coming from China. It’s going to be just fine.”

Not only was it not “fine,” but Trump’s rhetoric and complacency made it worse. Instead of acknowledging those failures, however, Trump on Monday told Fox & Friends that “I cannot imagine any president being able to do more than we’ve done.”

Trump will claim victory no matter how many Americans die

During his Sunday news conference, Trump repeatedly brought up the Imperial College study that concluded as many as 2.2 million Americans would have died from coronavirus had government not done anything.

“A lot of people were saying, maybe we shouldn’t do anything [about the coronavirus]. Just ride it. Ride it like a cowboy. Ride that sucker right through. That’s where the 2.2 million [deaths] come in,” Trump said. “That is not acceptable.”

TRUMP: “We heard people saying maybe we should not do anything [about the coronavirus]. Ride it like a cowboy. Ride that sucker right through. That is where the 2.2 million [deaths] come in … That is not acceptable.” pic.twitter.com/5XerXRltfa

Trump seemed to be trying to draw a contrast between the scenario where government literally did nothing and the path America is now on. With his reelection on the line, he set the stage to eventually proclaim that even 200,000 Americans deaths from the coronavirus would be evidence he saved lives.

We’ll never know how many people could’ve been spared had Trump taken coronavirus more seriously early on. And it’s true that this is a truly unprecedented situation that almost any administration may have struggled with. But we do know that almost everything Trump said and did about the outbreak from January until a couple weeks ago, with the exception of restricting travel from China after the virus had already started spreading here in the United States, was a fiasco.

Trump is trying to rewrite history. If 100,000 Americans die from the coronavirus, it would only be a successful outcome relative to the disastrous situation we now find ourselves in after weeks of wishful thinking and inaction from the president — a state of affairs that stands in contrast not only to the Obama administration’s handling of the H1N1 and the 2014 Ebola crises, but also to how governments like South Korea handled the current crisis.

Coronavirus is changing some high school seniors’ college plans
The slow implosion of Joe Biden’s big bet on South Carolina, explained
Any bipartisan January 6 commission is probably doomed
Elizabeth Warren wants to level the playing field for entrepreneurs of color
Tom Steyer said that California has eradicated private prisons. He’s wrong.
Is this Trump’s last UN speech, or the last of the UN?

Your Echo is now sharing your internet with your neighbors. Here’s how to opt out.