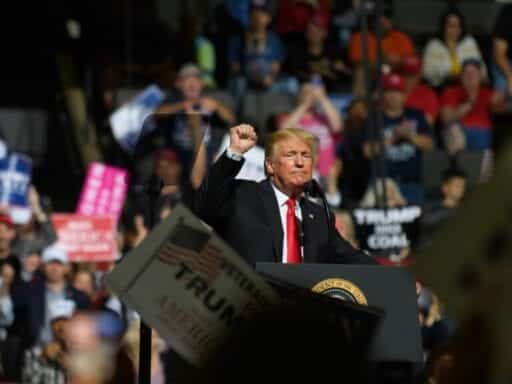 The president’s public admiration of brutal dictators and strongmen continued at a rally in West Virginia.

President Donald Trump says he and North Korean Leader Kim Jong Un “fell in love” over letters he and the brutal dictator have exchanged in recent months. Really.

Trump made the remarks while speaking at a Make America Great Again rally in Wheeling, West Virginia on Saturday. At first, the audience laughed when he said it, but then he reiterated the point — and acknowledged it would probably raise some eyebrows. Here’s what Trump said:

I was really being tough, and so was he. And we would go back and forth. And then we fell in love, okay? No, really. He wrote me beautiful letters, and they’re great letters. We fell in love.

He then gestured, presumably the press or world outside the arena, and anticipated a reaction. “But you know what? Now they’ll make, they’ll say, ‘Donald Trump said they fell in love, how horrible. How horrible is that? So unpresidential,’” he said.

Trump on Kim Jong-un: “We fell in love. Ok? No really. He wrote me beautiful letters.” pic.twitter.com/fscz1sWYS6

Trump was correct that the remarks would cause some ripples. Kim has made headlines in the last several years for his rapid development of the country’s nuclear arsenal, but first and foremost, he is a brutal and murderous dictator with a history of humans rights abuses. Vox’s Li Zhou points out that according to a 2017 International Bar Association report, there has been evidence of ”systematic murder (including infanticide), torture, persecution of Christians, rape, forced abortions, starvation and overwork leading to countless deaths,” and other crimes against humanity. That same report said that the Kim regime has “designed and perpetuated a brutal, totalitarian regime, a signature feature of which is a network of political prisons that has no parallel in the world today.”

Trump and Kim met at a summit in Singapore in June to discuss relations and the country’s potential denuclearization. Trump took a victory lap immediately thereafter, declaring that North Korea is no longer a threat, though there’s evidence that’s not the case and that the country is not, in fact, ending nuclear activities.

Trump has lavished praise on Kim at times, and the pair have exchanged letters, parts of which have been highly complimentary to one another. The Trump administration is preparing for a second North Korea summit, but the time and place haven’t yet been set. Trump canceled Secretary of State Mike Pompeo’s trip to North Korea in August, saying there wasn’t “sufficient evidence” of Pyongyang’s denuclearization efforts.

Trump loves to talk about strongmen

Trump in an interview with Fox & Friends in June said he admires how Kim’s people treat him. “I want my people to do the same,” he said, without acknowledging that the North Korean public is forced to admire Kim. He also toyed with the idea of inviting Kim to the White House.

Trump has a history of speaking kindly about dictators and strongmen, more broadly. He joked about Chinese President Xi Jinping changing the country’s constitution so that he could be “president for life” and quipped that “maybe we’ll have to give that a shot someday.”

Trump’s Saturday remarks about Kim indicate that he’s well aware of the blowback those comments are likely to ignite — and he made them anyway. The leader of one of the most powerful democracies in the world publicly admiring multiple brutal dictators, even if sometimes his comments seem to be made in jest, is disturbing.

It is also reflective of Trump’s transactional personality: he says nice things about me, I say nice things about him. Kim’s letters, to Trump, are a love story, no matter Kim’s actions in North Korea, or the global risks his compliments might gloss over.

A crashed voter registration website is Floridians’ latest obstacle to the right to vote
How Amy Coney Barrett on the Supreme Court could affect LGBTQ rights
Midsommar has a deeply trans narrative hiding in plain sight
The retail apocalypse: traditional retail chains are dying across America
Republicans’ ongoing smear campaign against Joe Biden is devastating to his theory of politics
5 winners and 4 losers of the 2020 Oscar nominations, from Joker to J. Lo