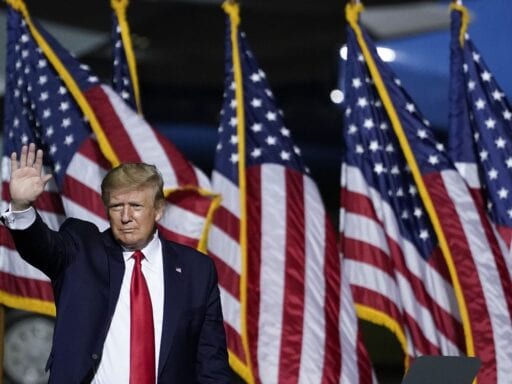 He politicized an incident in Pennsylvania to make an unfounded claim that Democrats are “cheating” in the election.

President Donald Trump’s re-election campaign is looking less and less like a run for office and more like an operation to justify maintaining power regardless of the election result.

At a rally in Newport News, Virginia on Friday night, Trump again refused to say whether he would peacefully transition out of the White House if he loses the presidential election this November, suggesting he would only do so if he was convinced Democrats and their presidential nominee, Joe Biden, did not cheat.

“We’ve gotta watch this ballot scam, because they’re scamming us. And then they say, ‘He doesn’t want to turn over [power].” Of course I do. But it’s gotta be a fair election,” Trump told the rally crowd.

“We’ve gotta watch this ballot scam, because they’re scamming us. And then they say, ‘he doesn’t want to turn over [power].’ Of course I do. But it’s gotta be a fair election.” — Trump pic.twitter.com/4DCQEKKszc

This was an apparent reference to an incident from earlier this week in which nine mail-in ballots were found discarded in the trash in Luzerne County, Pennsylvania, at least seven of which were cast for the president. While the Justice Department and Federal Bureau of Investigations have opened investigations into the incident, there’s no initial evidence of malfeasance either locally or nationally; this has created the appearance of a politically motivated investigation, as Vox’s Andrew Prokop explained:

If there are reports of issues with ballots, the Justice Department should naturally investigate. But the way this information was dribbled out seemed designed to bolster President Trump’s baseless claims that mail voting is deeply flawed — when [US attorney for the Middle District of Pennsylvania David] Freed’s actual findings have so far revealed no such thing.

The first public indications that something was up came when Trump himself told a Fox host in a radio interview that “Trump ballots” in “a trash can” were found in “a certain state,” and when White House press secretary Kayleigh McEnany mentioned at a press briefing that “ballots for the president were found in Pennsylvania.”

Then Freed released his first statement on the matter. The brief, vague statement said he could confirm that “a small number of military ballots” — nine — were “discarded.” It didn’t explain how or why, or whether there was intentional malfeasance. But the statement made sure to point out that “all nine ballots were cast for presidential candidate Donald Trump.” (This statement turned out to be wrong. Freed corrected it to say that seven of the nine were cast for Trump, the other two were resealed and their candidate preference is unknown.)

Local county election officials have blamed the discarded ballots on a seasonal temporary contractor who was dismissed over the incident.

Nevertheless, Trump tried to use the incident to bolster his claim that the election is rigged against him, potentially setting the stage for a legal dispute over the eventual result.

“We’re not going to lose this, except if they cheat. That’s the way I look at it,” Trump said. “We can’t let them cheat because our country at stake. These people will destroy our country [and] we can’t let this happen. … The Democrats know better than all of us what’s going to happen.”

The president’s remarks Friday took comments he made on a transition of power at a Thursday press conference a step further. “Win, lose, or draw in this election, will you commit here today for a peaceful transferral of power after the election?” Trump was asked during a press conference by Brian Karem, the White House reporter for Playboy.

“We’re gonna have to see what happens,” Trump said in response. “We want to get rid of the ballots, and we’ll have a very peaceful — there won’t be a transfer, frankly. There’ll be a continuation.”

Q: Will you commit to a peaceful transfer of power after the election?

TRUMP: “We’re gonna have to see what happens.” pic.twitter.com/Dzj7Q9ZJqv

Friday, the president made clear what he will be waiting to see, saying, “We do want a very friendly transition. But we don’t want to be cheated, and be stupid, and say, ‘Oh, let’s transiti —’ Well, we’ll go and we’ll do a transition, and we know that there were thousands and thousands of ballots that made the difference through cheating. We’re not going to stand for it.”

For some time, the president has been unwilling to commit to leaving office as presidents have for centuries. And his authoritarian refusals to cooperate with the democratic process have long been a pattern of his presidency.

In July, the president also refused to commit to a peaceful transfer of power in a Fox News interview with Chris Wallace.

TRUMP: “I think mail-in voting is going to rig the election.”

WALLACE: “Are you suggesting that you might not accept the results?”

WALLACE: “Can you give a direct answer that you will accept the election?

TRUMP: “I have to see.” pic.twitter.com/mPDPLY9vsr

On Twitter, and in speeches, the president has highlighted memes about running for office every four years for the next several decades. He has also said he deserves extra time in office beyond the constitutionally allowed eight years due to the investigations he faced. The president has written such statements off as “jokes,” but they take on a more serious tenor when taken alongside his remarks on transfer power, seeming more like a genuine threat to American democracy.

Trump’s antics come as he prepares to nominate his third Supreme Court justice in three years; and he has suggested he believes the new justice will ensure the court issues rulings favorable to him should it take up any election related lawsuits.

“We need 9 justices. You need that. With the unsolicited millions of ballots that they’re sending … you’re gonna need 9 justices.” — Trump suggests he’s counting on SCOTUS to have his back when he makes claims of election fraud following November’s election pic.twitter.com/Ju8ShMe8MN

All this becomes more concerning given national polls have consistently showed him to be running behind Biden. If the president is to lose the election — particularly if he loss is by a narrow margin — it appears he may be willing to grasp at any straw to justify calling the loss into question.

Elite law professors are brushing politics aside to support fellow elite Brett Kavanaugh. That’s ine...
Trump’s rationale for withholding aid to Ukraine changed overnight
What’s next for the MAGA merchants of Etsy? More Trump.
Why schools refuse to treat Little Women as a great American novel
A leaked State Department memo opposes a bill that would resettle Syrian refugees in the US
Trump’s goal of keeping out low-income immigrants just got a big boost from the Supreme Court