Trump says his former lawyer can ignore a House subpoena. A judge rejected that “sketchy” claim. 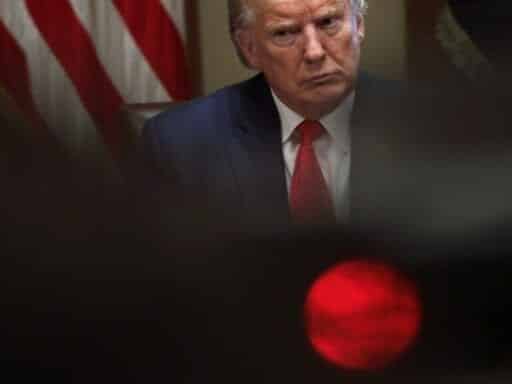 Share
Loading...
President Donald Trump during a listening session on youth vaping of electronic cigarette on November 22, 2019, in the Cabinet Room of the White House in Washington, DC. | Alex Wong/Getty Images

Former White House Counsel Don McGahn must testify before a House committee, according to the judge’s order.

Last May, President Trump directed his former White House Counsel, Don McGahn, to ignore a subpoena from the House Judiciary Committee and refuse to testify before that committee.

On Monday evening, federal Judge Ketanji Brown Jackson held that McGahn may not simply decline to show up to testify. The case is Committee on the Judiciary v. McGahn.

The House subpoena arises out of House Democrats’ continuing investigation into former Special Counsel Robert Mueller’s report, which potentially implicates Trump in obstruction of justice. Among other things, Trump allegedly directed McGahn to have Mueller removed in June 2017 — leading McGahn to threaten resignation. After press reports revealed these details, Trump also allegedly pressured McGahn “to dispute the story and create a record stating he had not been ordered to have the Special Counsel removed,” according to Mueller’s report.

The morning after Judge Jackson’s decision was handed down, an apparently emboldened House Oversight and Reform Committee filed a lawsuit against Attorney General William Barr and Commerce Secretary Wilbur Ross seeking to enforce a subpoena regarding the Trump administration’s efforts to add a citizenship question to the 2020 Census. The Supreme Court prevented the administration from adding that question in an opinion handed down last June.

Meanwhile, the administration appealed Judge Jackson’s decision to the United States Court of Appeals for the District of Columbia Circuit. Regardless of how the DC Circuit rules, whoever loses in the appeals court is likely to seek Supreme Court review.

Long before the McGahn case reaches the justices, however, the Supreme Court is likely to weigh in on another dispute between Trump and the House regarding an effort to subpoena his financial records. On Monday, the Supreme Court stayed a lower court decision in Trump v. Mazars, effectively letting Trump keep his finances secret for the time being. The Supreme Court also strongly hinted that it will hear the Mazars case on an expedited basis.

It is likely, in other words, that the court fight over whether Trump is subject to House oversight will reach its climax soon. However the Court rules in Mazars, that decision is likely to inform every other legal skirmish over whether Congress may probe the Trump presidency.

The McGahn litigation, like many of the other lawsuits involving congressional oversight of Trump, involves a dispute between two vastly different theories of America’s separation of powers.

Jackson’s opinion in McGahn is, in many important respects, narrow. Though it rejects the Trump administration’s argument that current and former presidential aides have “absolute testimonial immunity,” it acknowledges that McGahn could potentially — and lawfully — refuse to give much useful information to the committee. “No one disputes,” Judge Jackson writes, that a presidential aide might “withhold privileged information in the context of his or her compelled congressional testimony.”

For one thing, Judge Jackson’s 120-page opinion offers a lengthy rejoinder to the Trump administration view that Congress is largely powerless to compel the executive branch to comply with its legal obligations. At a recent speech to the conservative Federalist Society, Attorney General Bill Barr summarized the administration’s view in a few lines: “The Constitution gives Congress and the President many ‘clubs with which to beat’ each other,” Barr admitted, but “conspicuously absent from the list is running to the courts to resolve their disputes.”

Jackson rejects this reading of the Constitution. Her opinion relies, in part, on Marbury v. Madison’s (1803) widely quoted declaration that “it is emphatically the duty of the Judicial Department to say what the law is.” The law, as the Supreme Court explained more than a century later in McGrain v. Daugherty (1927), is that “the power of inquiry — with process to enforce it — is an essential and appropriate auxiliary to the legislative function.”

Thus, the law gives Congress the power to conduct investigations, and it is the role of the judiciary to say when Congress has appropriately exercised that power — and to enforce Congress’s lawful subpoenas.

Judge Jackson also argues that the Trump administration’s arguments rest on an exceptionally weak historical foundation. The notion that presidential aides have “absolute testimonial immunity,” she notes, arises from a memo that future Chief Justice William Rehnquist wrote when he was an assistant attorney general in the Nixon administration. That memo does, indeed, argue that “the President and his immediate advisers — that is, those who customarily meet with the President on a regular or frequent basis — should be deemed absolutely immune from testimonial compulsion by a congressional committee.”

Yet even Rehnquist did not appear to find this conclusion especially persuasive. “Rehnquist,” Jackson notes, “admitted that ‘his conclusions [were] ‘‘tentative and sketchy,’” and that “the historical precedents for refusing a congressional subpoena ‘are obviously quite inconclusive.’”

After Rehnquist became chief justice, moreover, he joined the Supreme Court’s decision in Clinton v. Jones (1997), which, as a later court opinion explained, established that “even the demands of the President’s schedule could not relieve him of the duty to give a civil deposition.” It follows that “if the President must find time to comply with compulsory process in a civil lawsuit, so too must his senior advisors for a congressional subpoena.”

While Judge Jackson’s decision is undoubtedly good news for House Democrats, it’s unlikely to be the end of the road for this court fight. Though Jackson’s opinion lays out a wealth of precedent suggesting that McGahn cannot simply refuse to show up to testify, it also acknowledges that McGahn is only the second federal court case on this issue — meaning that higher courts will have some freedom to reach the outcome they prefer.

The lack of precedents speaking directly to the specific question in this case plays in Trump’s favor. Thus far, the Supreme Court’s Republican majority has been very sympathetic to Trump’s arguments that courts should not interfere with his ability to run his administration as he chooses. That majority will have an easier time ruling in the Trump administration’s favor — should they wish to do so — if they do not need to overrule existing precedents in order to side with Trump.

So the fight over whether McGahn will testify still has a long way to go. Judge Jackson’s opinion is only the latest chapter in what is likely to be a protracted legal fight.

Food52, the recipes + cookware site founded by a former New York Times food columnist, is gobbled up
A history of racism led to an implosion of the romance publishing world. Now can it change?
“In a perfect world, they’d be running mates”: New Hampshire voters are torn between Sanders and War...
“I feel incredibly exhausted all the time”: 6 families on juggling child care during the pandemic
A Republican-backed bill to protect “abortion survivors” won’t pass. It still matters.
A conservative activist is under fire for calling out Republicans on coronavirus spread