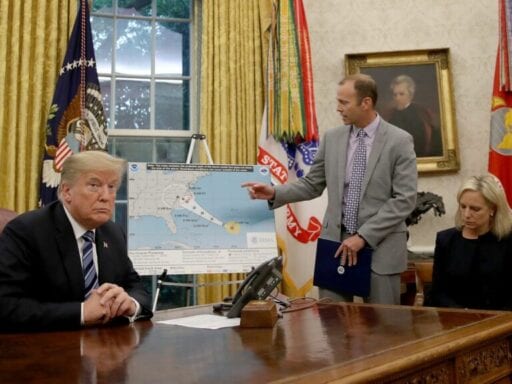 President Donald Trump says the federal government is “ready” for Hurricane Florence, whose Category 4 winds are barreling toward Virginia and the Carolinas.

According to Trump, the government’s “incredibly successful” response to Hurricane Maria in Puerto Rico last year is proof that he has everything handled.

Trump made these remarks Tuesday at the White House during a public briefing on the hurricane with Brock Long, head of the Federal Emergency Management Agency. A reporter had asked Trump what lessons he learned from Hurricane Maria, and how he has applied them to the government’s emergency plan for Hurricane Florence. (Right now, Florence is just as powerful as Maria was when it slammed into Puerto Rico.)

Trump clearly didn’t think there were any lessons to learn from the deadliest natural disaster in modern US history. He didn’t mention the nearly 3,000 Americans who died from the storm, or FEMA’s delay in approving crucial disaster aid to Puerto Rico, or the fact that FEMA hired inexperienced contractors, including one that failed to deliver millions of emergency meals to hurricane survivors.

Not only has he apparently not learned any lessons from that, but he now wants credit for the amazing way he handled the disaster.

“I actually think it’s one of the best jobs that’s ever been done,” Trump told reporters.

Listen to his comments for yourself:

BREAKING: President Trump says federal gov’t is “ready” for Hurricane Florence, and reflects on what he describes as “incredibly successful” response to Puerto Rico hurricane disasters in 2017 – “one of the best jobs that’s ever been done.” pic.twitter.com/7OWOcsCdP8

You can follow all of Vox’s coverage of Hurricane Florence here.

The problem with saying the Democratic primary is “rigged”
American democracy’s Senate problem, explained
Collins and Murkowski are pivotal votes in the Supreme Court fight. Here are their reactions to Bret...
What we know about the tiger with Covid-19 — and how the disease affects other animals
Polls: Senate races in Alaska and South Carolina are surprisingly competitive for Democrats
The EU condemns Trump’s travel ban and the NBA stops playing: Thursday’s coronavirus news