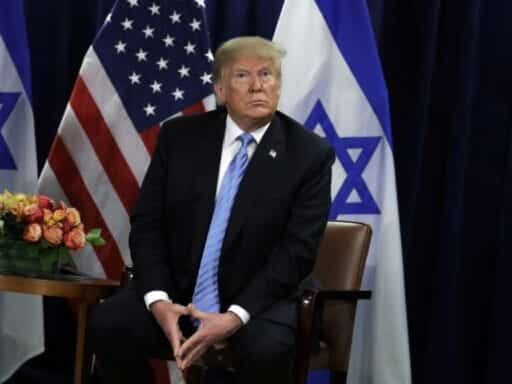 The president’s remarks came at a meeting on the sidelines of the United Nations General Assembly.

President Donald Trump still seems to believe he can solve the Israeli-Palestinian conflict — and that cutting off aid to millions of refugees is a great way to jump-start the process.

Speaking to reporters Wednesday before a meeting with Israeli Prime Minister Benjamin Netanyahu on the sidelines of the United Nations General Assembly, Trump said that “lots of good things are happening” with respect to his administration’s efforts to negotiate a deal between Israelis and Palestinians. But, he cautioned, “It will take a little time, as you know.”

That’s a rather rosy view of the state of things, given that Palestinian leaders have refused to negotiate with the Trump administration since December. Trump’s recent decision to cut off millions in life-sustaining aid to Palestinians has only seemed to make things worse.

But Trump touted that decision on Wednesday, implying that it was merely a good negotiating tactic. “We were paying them $550 million a year. Now, we’re paying them nothing a year,” he told reporters. But the aid would start up again, he continued. “So yeah, they’re absolutely coming back to the table.”

The president clearly seems to think a peace deal is still possible — he even said Wednesday that the peace plan his son-in-law and senior adviser Jared Kushner has been working on for more than a year now would be revealed in the next two to four months.

The whole world’s a boardroom for Trump

Trump has been aiming to bring about peace between the Israelis and Palestinians for a while now — mainly because he seems to see it as a great challenge.

But if anything, the Trump administration’s recent pro-Israel moves seem to have made possible negotiations less likely.

Back in May, the Trump administration officially recognized Jerusalem as the capital of Israel and opened a new US Embassy there, breaking with decades of established US policy.

The UN and the international community reacted with outrage to the announcement, as did many Palestinians. On May 14, the day the Jerusalem embassy move took place, Israeli soldiers clashed with Palestinians who were protesting along the border with Gaza, leaving more than 60 Palestinians dead.

On Wednesday, Trump praised his administration’s decision to move the US Embassy to Jerusalem as a key part of his strategy, and said that it was bringing about progress. “That was always the primary ingredient as to why deals couldn’t get done,” he said. “And now, that’s off the table.”

However, it was the embassy decision that prompted Palestinian Authority President Mahmoud Abbas to say that Palestinians would not cooperate with American-led peace negotiations anymore.

And in the months since, US relations with the Palestinians have only gotten worse.

In August, the Trump administration announced that it would cut $200 million in aid that was intended to go to Palestinians living in Gaza and the West Bank, and that it would end all US funding for the United Nations Relief and Works Agency (UNRWA).

UNRWA was formed in 1949, one year after the creation of the state of Israel. It provides health care, food, and education services to nearly 5 million Palestinian refugees spread out across the Middle East. The US is the largest single donor to the UN agency, responsible for providing about $350 million each year — a quarter of its annual budget.

The head of the organization said on Monday that they were starting to feel the cuts and needed $185 million to continue operating through the end of the year.

Israeli Prime Minister Benjamin Netanyahu has blamed the Palestinians for disrupting the peace process and heartily expressed his support for Washington’s decision to slash funding to the UN aid agency, though others in Israel — including some Israel Defense Forces officials — believe the decision will have severe and negative ramifications.

Perhaps it’s not a huge surprise that the author of The Art of the Deal would see one of the most incredibly complex and sensitive geopolitical issues as a chance to stretch his negotiating skills. But it does seem strange that he’s so optimistic.

And it’s important to keep the bigger picture in mind — a US president is touting his choice to cut off money that funds medical care, education, food, and social services to 5 million people, all in service of making “the deal of a century” happen.

No one knows if it will be effective, but we do know that it’s hardly humane.

Democratic Party leaders are “banging their head against the wall” after private meetings with Faceb...
Justice Sotomayor is poised to lead the minority wing of the Supreme Court
The Vast of Night is an exquisite indie sci-fi drama with Twilight Zone vibes
An economic crisis like we’ve never seen
What we know about the nationwide protests
Americans should be more afraid of HPV