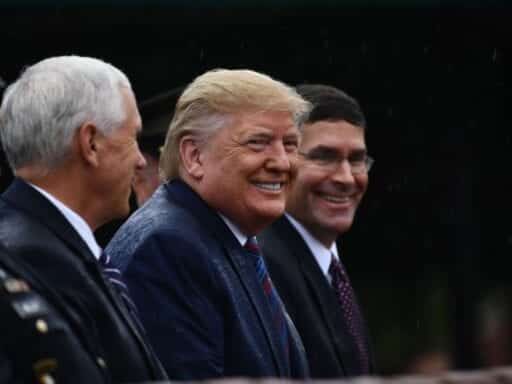 In a Sunday morning tweet, President Donald Trump said House Intelligence Committee Chairman Rep. Adam Schiff would have to pay a “price” for his leading role in the impeachment trial.

“Shifty Adam Schiff is a CORRUPT POLITICIAN, and probably a very sick man,” the president wrote. “He has not paid the price, yet, for what he has done to our Country!”

Shifty Adam Schiff is a CORRUPT POLITICIAN, and probably a very sick man. He has not paid the price, yet, for what he has done to our Country!

The president did not immediately clarify whether he meant the tweet to be a threat, as it appears to be, but Schiff certainly took it as one.

The lawmaker was quick to respond — through his own Twitter account, and on NBC’s Meet the Press, where he called Trump a “wrathful and vindictive” president. Schiff also told NBC’s Chuck Todd he thought the tweet was “intended to be” a threat against him.

WATCH: @RepAdamSchiff: “Look at the president’s tweets about me today saying I should pay a price..”@chucktodd: “Do you take that as a threat?”@RepAdamSchiff: “I think it is intended to be.” pic.twitter.com/8uWXRSJKj0

The president appeared to be aware of what Schiff said on the program, attacking its host and Schiff shortly after the segment aired, calling Todd “a fraud and corrupt” and Schiff a “conman.”

After having been exposed as a fraud and corrupt, can anyone, including Sleepyeyes Chuck Todd of Fake @NBCNews, continue to listen to his con?

Sleepyeyes Chuck Todd of Meet the Corrupt Press, just had a “totally” softball interview with conman Adam Schiff, never even calling Shifty out on his fraudulent statement to Congress, where he made up ALL of the words of my conversation with the Ukrainian President! FAKE NEWS

Sunday’s tweets are merely the latest in a long line of Twitter attacks the president has launched against Schiff and Todd.

The president often uses the press as a foil, having branded it the “enemy of the people,” and seems to have particular disdain for Todd, who he has accused of trying “to make me look as bad as possible.” This has led to tweets like Sunday’s, as well as naked antagonism, like a 2015 tweet in which the president wrote, “Sleep eyes [Chuck Todd] is killing Meet The Press. Isn’t he pathetic? Love watching him fail!”

Trump’s anger toward Schiff stems from the congressman’s crucial involvement in the impeachment trial; Schiff helped oversee the impeachment inquiry, and has led the arguments for the president’s removal in the Senate trial.

The president often attacks the lawmaker, as he did in his Sunday tweet, over Schiff’s decision to paraphrase a memo of Trump’s call transcript with Ukrainian President Volodymyr Zelensky, in which the president asked for an investigation into the Biden family. Although Schiff clearly noted that he was simply stating “the essence of what the president communicates,” Trump claimed Schiff incorrectly represented the call — and has used the incident to insult Schiff ever since.

Schiff’s fellow impeachment manager, Rep. Zoe Lofgren (D-CA), appeared on CNN’s State of the Union to criticize Trump’s Sunday tweet as “unfortunate,” and also said that he had a “tendency to say things that seem threatening to people.”

And Trump has sent a number of threatening tweets before, accusing Schiff of treason, attacking the whistleblower as a “disgrace to our country,” and calling for that person’s identity to be revealed (anonymity is granted by law to government whistleblowers). He has also attacked those who gave information to the whistleblower, referring to them as “spies,” and seemed to suggest the US should once again begin to execute spies, or those branded as such.

“He really ought to get a grip and be a little more presidential,” Lofgren said Sunday.

But as State of the Union host Jake Tapper noted in response, “People who are supporters of the president have heard his rhetoric and then actually tried to bomb and kill politicians and the media.”

And this is true, as Vox’s Sean Collins noted after Trump began to threaten the whistleblower with investigations:

Democrat and frequent Trump foil Rep. Ilhan Omar has spoken of a number of deaths threats she has received, for instance, and Cesar Sayoc was sentenced to 20 years in prison for mailing pipe bombs to some of Trump’s critics.

All this means that for a president who has a platform of 71.6 million followers, a tweet is never just a tweet — each message is an official statement from the president of the United States, and is treated as such by the press, lawmakers, and Trump’s passionate base.

Trump’s Twitter activity has increased since the impeachment trial began

While the Trump presidency and Twitter have long been inseparable, his social media activity has recently increased in volume and aggressiveness — all to set a counter-narrative to the Senate impeachment trial.

As Vox’s Aaron Rupar has documented, Trump made a single-day posting record with more than 140 tweets and retweets on Thursday, many which were inaccurate and arguably tasteless. And while many have grown numb to Trump’s social media presence, Rupar noted how Trump’s recent tweets point to a “broader toxicity” within the presidency — and why we should care:

So it’s not just Trump’s tweets that have become increasingly normalized as we get further and further away from having a president who is held to any sort of standards. It’s Trump’s behavior in general. And one wonders how bad things will get in the likely event that Trump is acquitted by the Senate and heads into his reelection campaign feeling even less constrained by any sort of oversight.

These latest tweets are of a kind with those the president sent last week, and underscore this concern. And they would seem to only bolster concerns about Trump’s behavior Schiff and his fellow impeachment mangers expressed in their arguments before the Senate last week.