Trump says selling weapons to Saudi Arabia will create a lot of jobs. That’s not true. 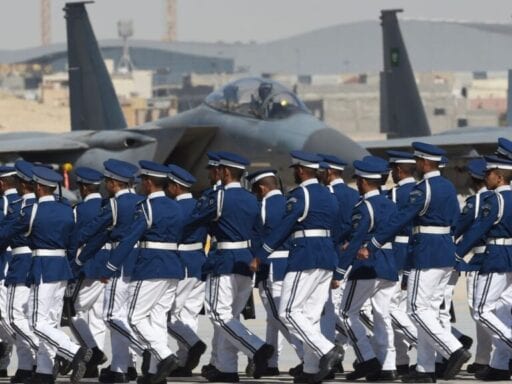 The impact of foreign arms sales on the US economy is minuscule.

President Donald Trump wants America to think that tons of US jobs depend on the sale of US military weapons to Saudi Arabia and other shady regimes. But they really don’t.

The president has been pushing back against public pressure to cancel weapon sales to Saudi Arabia in light of recent news that Saudi leaders may have ordered the assassination of a US resident and journalist who wrote for the Washington Post. Jamal Khashoggi, who fled the kingdom in 2017, often criticized Saudi Crown Prince Mohammed bin Salman for jailing hundreds of journalists and activists and for engaging in a brutal war in Yemen.

Khashoggi’s apparent assassination two weeks ago at a Saudi consulate in Turkey has fractured US relations with the kingdom, and Republicans and Democrats in Congress have urged the president to consider imposing sanctions on the country.

Trump, though, has downplayed the evidence linking the crown prince (who is also known as MBS) to Khashoggi’s apparent murder, and has made it clear that he really, really doesn’t want to stop selling weapons to the gulf monarchy.

His reason? Too many American jobs depend on US arms sales to the kingdom. He repeated that claim during an interview that aired on CBS’s 60 Minutes on Sunday:

“They are ordering military equipment. Everybody in the world wanted that order. Russia wanted it, China wanted it, we wanted it. We got it … I don’t wanna hurt jobs,” he said.

But as it turns out, canceling weapons sales to Saudi Arabia won’t really hurt US jobs much. There aren’t that many American workers making weapons for the Pentagon, much less Saudi Arabia, and MBS isn’t buying enough weapons to put a dent in the US economy anyway.

Overall, the private US defense industry does directly employ a lot of US workers — about 355,500 in 2016, according to the most the recent estimates from the Aerospace Industries Association. But private-sector defense workers make up less than 0.5 percent of the total US labor force, and that includes every person whose job depends directly on the sale or production of airplanes, tanks, bombs, and services for the entire US military. It’s unlikely that many of them, if any, depend directly on weapons sales to Saudi Arabia, and its also unlikely that those jobs would vanish if Saudi money disappeared.

“The relationship between arms sales and jobs is exaggerated,” said William Hartung, an analyst who studies US weapons exports for the liberal-leaning Center for International Policy.

Beyond this, Hartung points out, Saudi Arabia isn’t actually even spending a massive amount of money on American weapons. The kingdom buys the ammunition and bombs it needs to keep waging a bloody war in Yemen, but nothing even close the $110 billion deal Trump touted.

So despite what the president says, there is no real threat of US job losses to justify continued American support for a repressive regime that is likely responsible for the gruesome murder of a journalist in Turkey — and that is also killing thousands of civilians with American-made weapons in Yemen.

Arms sales are about politics, not jobs

Trump is hardly the first US president to agree sell fighter jets, missiles, and other military equipment to Saudi Arabia. President Barack Obama did it, and so did every other president going back to the Truman administration. The United States was desperate for Saudi oil and a military ally in the Middle East, so US politicians have been willing to sell the kingdom all the war weapons it wants, ignoring the regime’s record of human rights abuses.

In 2016, as Obama ended his last term, his administration notified Congress about plans to sell $5 billion worth of military equipment to Saudi Arabia. That included deals brokered by the Pentagon, State Department, and those handled directly by the US defense companies that make the equipment. Saudi Arabia wanted to buy missiles and jet fighters.

But concerns were mounting about Saudi Arabia’s bloody war in Yemen, where the kingdom has been fighting the Iranian-backed Houthi rebels since 2015. Human rights groups and the United Nations expressed concern that Saudi airstrikes were killing thousands of civilians at schools, clinics, markets and weddings.

In just one instance, in October 2016, Saudi warplanes dropped a 500-pound laser-guided bomb that killed at least 100 people attending a funeral. The bomb, a GBU-12 Paveway II, was manufactured in the United States at the time by defense contractors Raytheon and Lockheed Martin.

In response, shortly before leaving office, Obama suspended the proposed sale of another $500 million worth of laser-guided bombs to Saudi Arabia.

That changed after Trump arrived at the White House. In March 2017, then Secretary of State Rex Tillerson greenlighted the sale, as well as a handful of arms deals with other countries that were on hold because of human rights concerns. That included the sale of military jets to Nigeria and fighter planes to Bahrain. The president said ramping up arms sales was part of his plan to boost US manufacturing jobs, and it no longer seemed to matter what foreign militaries were doing with the weapons.

In May 2017, Trump made his first foreign trip to the Saudi capital of Riyadh, where he met with MBS, the kingdom’s new crown prince. Trump said he was brokering a $110 billion arms deal that would create “jobs, jobs, jobs.”

Even though Trump had lifted the hold on the $500 bomb sale, some members of Congress tried to block it. They couldn’t. In June, the Senate narrowly approved the deal. Since then, the Saudi-led coalition has killed thousands of civilians with American-made bombs, including at least 40 children who were riding a school bus. The United Nations now considers the situation in Yemen “the world’s worst humanitarian crisis.”

But instead of reprimanding MBS, Trump has continued to push for arms sales to the kingdom, touting the supposed economic benefits for the United States. When MBS visited the White House in March, Trump was effusive about it. He even held up a US map highlighting all the states that would get jobs from the arms deal with Saudi Arabia.

The map stated that 40,000 jobs would be created, though the administration didn’t cite the source for that number. That’s because no one knows for sure how many US jobs depend on arms sales. The federal government doesn’t keep data on that, and it doesn’t even break down how many total jobs are related to manufacturing military equipment. It’s a tiny fraction of the US labor force.

Here’s what we do know: The private-sector defense industry directly employed a total of 355,500 in 2016, according to the most the recent estimates from the Aerospace Industries Association. That includes manufacturing jobs, but also every other job in the defense industry, even those who are supplying uniforms for soldiers. This entire group makes up less than 0.5 percent of the total US labor force. And their main client is the US military, not the Saudi military.

About 153,800 American workers are directly involved in making commercial and military aircraft, according to the most recent industry employment numbers from the Bureau of Labor Statistics. But that includes workers who make passenger planes for commercial airlines, a much larger sector of the economy that those who make military jets and helicopters.

But we can get pretty specific data on how many American workers are making bombs. That data is more clear-cut, and Saudi Arabia buys plenty of American bombs for its war in Yemen. Only about 7,666 workers were making bombs for the defense and law enforcement industries in 2016, and that includes explosives sold to the entire US military. It’s doubtful these jobs are entirely dependent on arms sales to Saudi Arabia. In short, the US economy does not need Saudi Arabia to keep buying bombs. (And besides, MBS wants all arms deals to include some production in the kingdom.)

In the short term, selling weapons to Saudi Arabia may support some US factory jobs. But here’s the thing: Saudi Arabia plans to start manufacturing a lot of those weapons at home.

Building up a local weapons manufacturing industry is part of the crown prince’s much-touted 2030 economic development plan, which is supposed to reduce the kingdom’s economic dependence on oil exports. In short, Saudi Arabia expects half of all jobs created by weapons deals to be local jobs. Here’s what he says in an outline of the plan that the Saudi government has posted online:

Localization will be achieved through direct investments and strategic partnerships with leading companies in this sector. These moves will transfer knowledge and technology, and build national expertise in the fields of manufacturing, maintenance, repair, research and development. We will also train our employees and establish more specialized and integrated industrial complexes.

American defense contractors that sell a lot of military equipment to Saudi Arabia are on board. Raytheon, for example, is in the process of opening a subsidiary in Riyadh.

Aside from shifting manufacturing jobs overseas, Saudi Arabia’s defense industry could eventually compete with the US defense industry. This focus would completely change the current economic relationship between both countries, according to Reuters.

Since Trump took office, Saudi Arabia has signed about $14.5 billion in commitments to buy US weaponry. No contracts have actually been signed, so details are scarce. Items in the pipeline include bombs, missiles, tanks, and aircraft. But at least one involves manufacturing parts overseas, not in the United States.

Now Congress is reportedly reviewing another proposed sale of 12,000 guided bombs to Saudi Arabia, according to Reuters. The Senate could cancel the sale if they can get enough votes, and some senators have suggested this as a form of sanctions in response to the Khashoggi case. Trump said that would be bad for American workers. But, once again, US workers don’t need Saudi Arabia.

William Barr has refused to testify in front of the House Judiciary Committee
Paul Ryan: “The president must appreciate that Russia is not our ally”
After Mueller’s Russian indictments, Trump returns to a familiar line: blame Obama
What we know about turnout for the 2020 Iowa caucuses
Poll: Young Americans think democracy is “broken,” but intend to vote in record numbers
Obama’s McCain eulogy would be banal under any other president