Trump says tariffs are working “big time.” Here are 5 pieces of evidence that’s not the case. 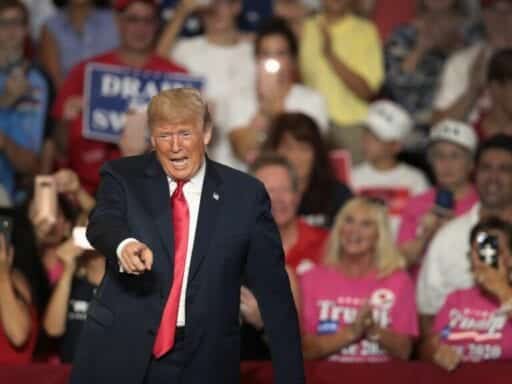 Ask the farmers who need the $12 billion bailout.

President Donald Trump really wants the American people to believe his trade war and tariffs are all working out exactly as planned — and ignore mounting evidence that might not be the case.

Trump fired off a series of tweets over the weekend celebrating his trade aggressions. His administration has imposed tariffs on a variety of imports from China, Canada, Mexico, the European Union, and Japan, and on Sunday, Trump said they’re “working big time.” Whatever the outcome — companies pay tariffs, or they start building in the US — he said it means “jobs and great wealth.” He also declared that tariffs will help the US pay down the deficit. (It won’t.)

Tariffs are working big time. Every country on earth wants to take wealth out of the U.S., always to our detriment. I say, as they come,Tax them. If they don’t want to be taxed, let them make or build the product in the U.S. In either event, it means jobs and great wealth…..

..Because of Tariffs we will be able to start paying down large amounts of the $21 Trillion in debt that has been accumulated, much by the Obama Administration, while at the same time reducing taxes for our people. At minimum, we will make much better Trade Deals for our country!

So far, Trump has targeted steel and aluminum imports from many American allies and put tariffs on $34 billion of Chinese goods, this week floating the idea of increasing them. China has retaliated with tariffs of its own and is threatening even more, and while Trump reached a truce with the European Union to pull back from a full-blown trade war, a grander trade deal between the US and the US is hardly guaranteed. In fact, the renegotiated, better trade deals Trump promised on the campaign trail have largely failed to materialize, with the exception of an agreement reached with South Korea in March.

In tweets on Saturday, Trump said that tariffs will make the United States “much richer than it is today” and cited the recent decline in China’s stock market as evidence of their success. “We are Winning, but must be strong!” he wrote.

Tariffs are working far better than anyone ever anticipated. China market has dropped 27% in last 4months, and they are talking to us. Our market is stronger than ever, and will go up dramatically when these horrible Trade Deals are successfully renegotiated. America First…….

….Tariffs have had a tremendous positive impact on our Steel Industry. Plants are opening all over the U.S., Steelworkers are working again, and big dollars are flowing into our Treasury. Other countries use Tariffs against, but when we use them, foolish people scream!

….Tariffs will make our country much richer than it is today. Only fools would disagree. We are using them to negotiate fair trade deals and, if countries are still unwilling to negotiate, they will pay us vast sums of money in the form of Tariffs. We win either way……

….China, which is for the first time doing poorly against us, is spending a fortune on ads and P.R. trying to convince and scare our politicians to fight me on Tariffs- because they are really hurting their economy. Likewise other countries. We are Winning, but must be strong!

There are some winners in Trump’s trade war. The United States steel industry, for example, has benefited from rising steel prices (although Trump for some reason keeps lying about US steel opening new mills). The US economy is doing well, though it’s unlikely much of that is a direct result of Trump’s trade tactics.

But there are a lot of losers, too — farmers in need of a bailout, manufacturers who use aluminum and steel in their supply chains, American consumers discovering the “tax” tariffs impose is actually on them.

As Trump continues to insist his trade tactics are going spectacularly, here are five pieces of evidence that might not be the case.

“Tariffs are the greatest,” Trump declared in a tweet in late July. Hours later, reports emerged that his administration is planning to give $12 billion in emergency aid to farmers hurt by those “great” tariffs.

As Vox’s Tara Golshan laid out, the agriculture industry is among the hardest-hit sectors as foreign countries retaliate with tariffs of their own. China, Mexico, and Canada have responded to the US’s measures with taxes on American soybeans, dairy, pork, apples, and potatoes, among other products. Prices for soybeans have dropped to a 10-year low, and soybean exporters rushed to get their product out of the country earlier this year ahead of the impending trade war.

2. Other countries are making trade deals without the US

After taking office, Trump announced that he would withdraw the United States from the Trans-Pacific Partnership (TPP) and promised to make good on his campaign-trail promises to renegotiate new deals he deems more fair, including an overhaul of the North American Free Trade Agreement (NAFTA). That’s not exactly how it’s worked out — there’s still no new NAFTA, and the bilateral deals Trump has focused so much of his rhetoric on have largely failed to materialize.

What’s more, other countries are moving on without the US.

Japan and the EU in July agreed to an outline for a trade deal that would rival the size of NAFTA — a consequence, in part, of Trump’s TPP withdrawal. The same goes for the 11-country Asia-Pacific trade agreement signed in March, which will reduce tariffs on nations that together make up more than 13 percent of the global economy. (Had the US signed on to the deal under the TPP, it would have represented 40 percent.) China has also been shopping for new trade agreements as the US has stepped back from the global stage.

3. The tariffs are showing up in consumer prices and business decisions

Tariffs are taxes imposed on goods and services. Trump’s case is that it’s foreign companies that pay them, but ultimately, they often wind up being shouldered by US consumers. And there’s evidence that’s what’s happening now.

Aluminum and steel tariffs could cost the US beer industry $348 million per year alone, according to the Washington Post, citing the Beer Institute. The rest of the beverage industry is taking taking a hit, too: Coca-Cola, for example, has said it has to raise prices. The National Association of Home Builders has said that Trump’s tariffs on softwood lumber from Canada have increased the cost of building a home by $7,000. Machinery maker Caterpillar has said it will raise prices. Winnebago is upping the cost of its RVs, too, and washing machine prices have spiked.

Harley-Davidson has said Trump’s trade tactics will result in it moving some production overseas altogether. Mid-Continent Nail announced layoffs because of them.

4. The tariffs aren’t making a dent in the United States’ debt

Trump’s claim on Sunday that the tariffs would allow the US to start paying down “large amounts” of the US’s $21 trillion debt isn’t true.

The amount of tariffs the president has imposed so far — about $85-billion worth of foreign goods — isn’t enough to make a dent in the US’s $21 trillion deficit. The Washington Post’s Heather Long did the math and found that Trump’s tariffs would raise about $21 billion at most, or 0.1 percent of the total debt:

Since taking office, Trump has added substantially to the debt, with a large tax cut and additional government spending on the military and various domestic priorities. In total, he has added about $1.6 trillion to the debt since taking office (higher if you take into account additional interest charges), according to the Congressional Budget Office. The money raised from the tariffs does little to counterbalance all the money Trump has added to the debt.

He has also announced $12 billion in aid to farmers hurt by the tariffs. That is additional spending that further reduces the money raised from his tariffs by nearly half.

5. We still don’t know what winning looks like for Trump

As eager as Trump is to declare a victory lap on trade, it’s still unclear what exactly a victory would entail.

The aluminum and steel tariffs were imposed under the justification of protecting national security, but they are hitting the US’s closest allies and partners and could be ultimately undermining America’s goal to put pressure on China. It’s unclear whether the national security justification is anything more than an excuse for Trump to do something he already had his mind set on doing.

Trump got some concessions out of European Commissioner Jean-Claude Juncker in July, including a pledge that the EU will import more US soybeans and liquefied natural gas, while the US said it would stop future tariffs while they continue to negotiate over the steel and aluminum taxes. Still, it’s unknown what the broader goal is here.

And on the China front, the trade war seems to be ratcheting up, with both sides considering more measures. Multiple experts recently told me that there’s still an off-ramp to the trade war, but a big part of the problem is that no one knows what Trump really wants — including, perhaps, Trump himself. The president has focused much of his energy on talking about trade deficits, but economists say he seems to sometimes misunderstand them, and he’s never laid out an exact picture of what, in his mind, constitutes a good trade deal.

“There’s always a way out of these things, there’s always a deal to be done,” Edward Alden, senior fellow at the Council on Foreign Relations, recently told me. “But it’s very hard with the Trump administration to figure out what those deals might look like.”

Andrew Gillum wins Florida governor primary in upset victory for the left
The First Purge completes the franchise’s transition to full-on social horror
Does Congress need to approve any military action against Iran? Republicans aren’t so sure.
What’s up with Bran and the Night King? Is Bran the Night King? Maybe!
3 things to know about Ireland’s elections Saturday
Disney+ will launch in November for $6.99 per month. Here are 5 things to know.