Trump says Texas’s challenge to his election loss is “the big one.” It’s almost certain to fail. 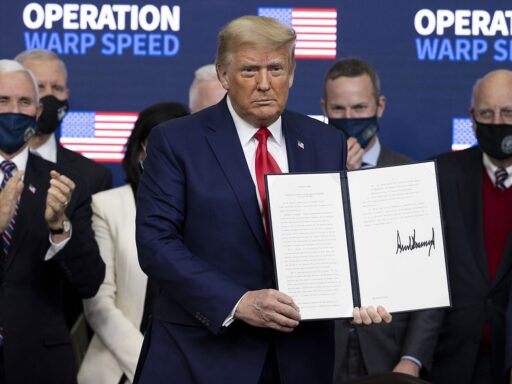 Texas and 17 other red states are asking the Supreme Court to block Biden’s win. The problem is their utter lack of strong arguments.

President Donald Trump on Wednesday proclaimed on Twitter that the federal government “will be INTERVENING” in a long-shot Texas lawsuit challenging the results of the presidential election he lost to Joe Biden, adding that the case — which comes as Trump and his allies are on a historic streak of losing legal challenges — is “the big one.”

We will be INTERVENING in the Texas (plus many other states) case. This is the big one. Our Country needs a victory!

The case is the handiwork of staunch Trump ally Texas Attorney General Ken Paxton (who is under federal investigation and hence could benefit from a potential presidential pardon). Paxton’s lawsuit asks the Supreme Court to block four states where Biden won the popular vote — Pennsylvania, Michigan, Wisconsin, and Georgia — from casting electoral votes for Biden.

It’s not exactly clear what Trump meant in promising to “intervene” in the lawsuit, which has the support of 17 other Republican state attorneys general who on Wednesday filed an amicus brief rife with flawed arguments.

A lot of this brief is people in glass houses casting stones. It argues that allowing absentee ballots to arrive after Election Day undermines faith in democracy. But Kansas and Mississippi, which both signed on, also count mail-in ballots that arrive late. pic.twitter.com/vOuGvjQjVW

If the Texas lawsuit succeeds and the four states in question are prevented from casting electoral votes for Biden, it would mean that Biden would no longer have the 270 electoral votes he needs to become president. That would obviously be a very big deal, and could perhaps signal the end of democratic presidential elections in the United States. But there’s no reason to believe the Supreme Court will insert itself into an election that Biden very clearly won.

The Texas lawsuit is a slapdash effort

As Amy Howe explains for SCOTUSblog, Paxton’s lawsuit argues that Texas voters were disenfranchised in a national election by lax mail voting standards in Pennsylvania, Michigan, Wisconsin, and Georgia:

The filing by Texas Attorney General Ken Paxton accuses government officials in the four states of using the COVID-19 pandemic to make changes to their states’ election laws through “executive fiat or friendly lawsuits, thereby weakening ballot integrity.” The state officials, Paxton writes, “flooded” their states with absentee ballots and “weakened the strongest security measures protecting the integrity of the vote-signature verification and witness requirements.” As a result, Paxton contends, the 2020 election “suffered from significant and unconstitutional irregularities in those four states” – for example, treating voters in Democratic areas more favorably than in other areas. When taken together, Paxton asserts, these flaws make it impossible to know who “legitimately won the 2020 election and threaten to cloud all future elections.”

On Fox & Friends, the Texas AG says his election lawsuit against 4 other states hopes to convince SCOTUS that they “did not follow their own state law,” therefore “lets transfer this to the legislature … and let them decide the outcome of the election.” pic.twitter.com/7u6q65dzZS

“Charges of unfairness are serious. But calling an election unfair does not make it so,” wrote Trump-appointed Judge Stephanos Bibas while rejecting a Trump legal challenge to Pennsylvania’s results. That sentiment was echoed by a conservative justice on Wisconsin’s Supreme Court, Brian Hagedorn, who wrote in response to another failed Trump legal challenge, “Judicial acquiescence to such entreaties built on so flimsy a foundation would do indelible damage to every future election.”

Unsurprisingly, elections officials and lawyers active in the states being sued by Paxton are responding to his effort by mocking and ridiculing it.

Marc Elias, chair of the Perkins Coie Political Law group, which represents the Biden campaign, tweeted of the lawsuit, “No, I am not worried. No, this won’t succeed.”

NEW: Texas has filed a lawsuit against Pennsylvania, Wisconsin, Georgia and Michigan in the US Supreme Court seeking to invalidate their election results.

My answers to your questions:
✅No, I am not worried.
✅No, this won’t succeed.
✅I have no idea.https://t.co/mAN98udwBi

Georgia Attorney General Chris Carr, who chairs the Republican Attorneys General Association, said through a spokesperson that “with all due respect, the Texas Attorney General is constitutionally, legally and factually wrong about Georgia.” Along similar lines, Michigan Secretary of State Jocelyn Benson, a Democrat, tweeted, “This lawsuit seems to suggest that the voters of Michigan messed with Texas. They didn’t. Case closed.”

This lawsuit seems to suggest that the voters of Michigan messed with Texas.

While Trump hasn’t been shy about indicating publicly that he thinks the three Supreme Court justices he successfully nominated owe him something, the court’s quick one-sentence dismissal on Tuesday of Rep. Mike Kelly’s (R-PA) effort to prevent Pennsylvania from certifying Biden’s victory in the state indicated that the court’s conservative majority isn’t keen to involve themselves in Trump’s efforts to overturn his loss.

For Trump, however, desperate times call for desperate measures.

The backdrop for Trump’s embrace of the Texas gambit is his increasing brazenness about what he’s trying to do, which is overturn the results of an election he lost.

On Wednesday alone, the president posted a tweet exclaiming “RIGGED ELECTION,” another claiming (falsely) that “I received hundreds of thousands of legal votes more, in all of the Swing States, than did my opponent,” and a third lamenting that “If somebody cheated in the Election, which the Democrats did, why wouldn’t the Election be immediately overturned? How can a Country be run like this?”

These tweets came a day after Trump used a coronavirus vaccine event at the White House as an opportunity to undermine US elections while suggesting Biden might not be inaugurated as president next month.

While Trump wants people to believe his loss to Biden was tainted, his legal team hasn’t been able to produce any evidence. In fact, there have been more coronavirus cases among Trump’s top campaign lawyers (two — Rudy Giuliani and Jenna Ellis recently tested positive) than successful legal challenges brought by Trump’s allies (one).

Experts say Paxton’s lawsuit recycles flimsy allegations of irregularities from challenges that have already failed. For instance, University of Washington School of Law professor Lisa Marshall Manheim argued in the Washington Post of Paxton’s case that “it is an uninspired retread of the many state-level claims that already have imploded since Nov. 3. Texas has simply delivered these defective claims in an even worse package.”

Uninspired as it may be, Trump is clearly unable to discern good evidence from nonsense. On Wednesday, for instance, he cited the fact that betting sites briefly upgraded his odds of winning on election night — before many of the mail votes that Biden unsurprisingly dominated were tallied — as apparent evidence that he was the victim of a conspiracy. (Trump’s tweet is factually incorrect. His odds were never as high as he claimed.)

While it’s unlikely that the Texas lawsuit gains traction, Trump’s refusal to concede has produced a fundraising bonanza for him and given his hardcore fans a reason to hold on to hope for at least a little bit longer.

Watching a bunch of pro-Trump media today and it’s pretty universal: The new theory is that SCOTUS will take up the Texas case and allow state legislatures to replace the electors chosen by voters. Goalposts moving at mach 5

In the likely event that the Texas gambit fails, the result will feed into the “rigged election” narrative Trump has been pushing — one that could become his platform for a 2024 run. And if staying true to that story requires Trump to denigrate the Supreme Court as part of the “deep state,” then there’s little reason to believe he won’t go there.