Trump says there’s another tax cut on the way. We have no idea what he’s talking about. 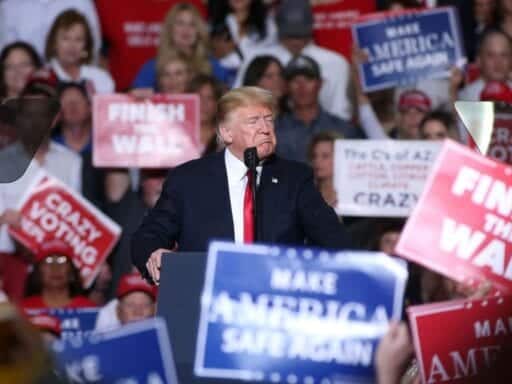 The GOP had a chance to cut taxes for the middle class last year. Instead, they went with rich people and corporations.

Running on the tax cuts isn’t working particularly well for Republicans in the 2018 midterm elections. So President Donald Trump is promising more of them — an essentially impossible feat with Election Day nearly two weeks out.

Speaking with reporters in Nevada on Saturday, Trump said he was working on a “very major tax cut for middle-income people.” He said the White House and Congressional leaders are “studying very deeply, round the clock” to create another tax cut “not for business at all” that will be announced on November 1 or sooner. Axios was first to flag the remarks.

It’s not at all clear what Trump is talking about. House Republicans last month quietly passed a tax bill that would extend tax cuts for individuals that under last year’s legislation are set to expire in 2025. The Senate hasn’t expressed an interest in taking it up, and the president seemed to be alluding to some new package that they’re still hammering out the details on, not the bill the House GOP already passed, or the broader package they rolled out in September.

Trump’s most significant legislative accomplishment has been the 2017 Tax Cuts and Jobs Act, which cut taxes for most Americans but overwhelmingly benefited corporations and the wealthy. Despite his and the Republican Party’s efforts to sell the bill, it’s not popular with voters, and most Americans say they don’t see it in their paychecks.

That hasn’t stopped Trump from talking about another round of cuts.

He then talked about cutting taxes more for corporations. The 2017 bill cut the corporate rate from 35 percent to 21 percent. “One of the things we’re thinking about bringing the 21 percent down to 20. And then, for the most part, the rest of it would go to the middle class. It’s a great stimulus,” he said.

Later in the month, the New York Times reported that the administration was considering a unilateral move that would cut taxes, mainly for rich people, by $100 billion. The White House was contemplating bypassing Congress and attempting to cut capital gains taxes (taxes imposed when an investor sells an asset, such as a stock).

The idea, which was legally tenuous, appears not to have gotten very far.

Republicans had a chance to cut taxes for the middle class last year. Instead, they went with rich people and corporations.

The GOP has struggled to sell its 2017 tax bill and has largely abandoned running on it ahead of the midterm elections. Many Americans just aren’t sold on the idea that it was a major boost for them — probably because it wasn’t.

According to estimates from the Center on Budget and Policy Priorities, while most Americans will benefit at least somewhat from the tax cuts already passed, the top fifth of earners get 70 percent of the bill’s benefits, and the top 1 percent get 34 percent. The new tax treatment for “pass-through” entities — companies organized as sole proprietorships, partnerships, LLCs, or S corporations — will mean an estimated $17 billion in tax savings for millionaires in 2018. American corporations are showering their shareholders with stock buybacks this year thanks in part to their tax savings.

All this has come at a cost: the Treasury Department said this week that the federal budget deficit had increased to $779 billion in fiscal year 2018, a 17 percent increase from the prior year, in large part because of the tax cuts Republicans had claimed would pay for themselves. And some in the GOP are already talking about cutting Social Security and Medicare to make up for it.

In an interview with the Associated Press, Trump blamed the ballooning deficit on wildfires and hurricanes in 2017, which resulted in $306 billion in damages, as well as on the need to fund the military. “We had to do things that we had to do,” he said.

But as Vox’s Tara Golshan explained, it was the tax cuts — which Trump is nebulously promising more of now:

The major reason the deficit swelled this year: Republicans’ tax cuts. The CBO has already estimated these cuts will cost $1.46 trillion over 10 years — or roughly $1 trillion when adjusted for economic growth — and increase the deficit by $164 billion in 2018 alone. The law is projected to add another $230 billion to the deficit next year. Those numbers make any emergency funding for disaster relief or military stimulus look like small potatoes.

The haunting of Girlstown
“We just don’t know what’s happening in our bodies”: Covid-19 long-haulers are still suffering
Low-income immigrants are afraid to seek health care amid the Covid-19 pandemic
The next huge challenge for a Covid-19 vaccine: Keeping it cold
Gender equity was at the forefront of the fifth Democratic debate
Bar Rescue’s Jon Taffer explains why experiences make us want to buy stuff