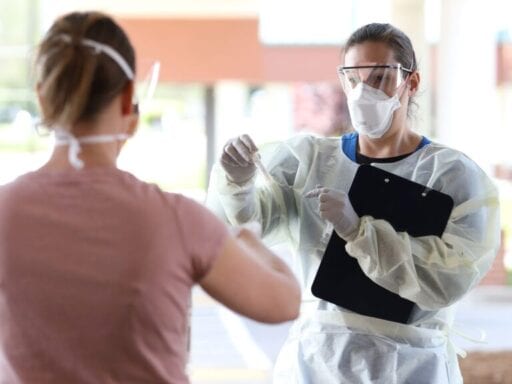 Governors say they want to open up their states, but a lack of testing is standing in their way.

Governors of both parties are pushing back on Trump administration claims that there are enough coronavirus tests for states to begin reengaging sectors of their economy, with their critiques coming as they pleaded for the federal government to coordinate an interstate strategy to increase capacity.

On Sunday morning, Vice President Mike Pence repeated the assertion that current testing levels are sufficient for “any state in America to move into phase one” of the administration’s guidelines on reopening the United States economy. This followed a claim from President Donald Trump on Saturday that the country’s “capability and capacity are fully sufficient to begin opening up the country totally.”

But Republican and Democratic governors alike said Sunday that’s not true. States are still hundreds of thousands of tests away from being able to reopen their economies, a problem driven in part by a shortage of reagents and swabs needed to conduct tests.

“To say that the governors have plenty of testing and they should get to work on testing, somehow we aren’t doing our job, is just absolutely false,” said Gov. Larry Hogan (R-MD) on CNN’s State of the Union. “Every governor in America has been pushing and fighting and clawing to get more tests.”

Gov. Ralph Northam (D-VA), told CNN’s Jake Tapper it’s “just delusional” to say there are enough tests to begin easing restrictions. “For the national level to say that we have what we need and really to have no guidance to the state levels is just irresponsible, because we’re not there yet,” he said.

The US has been doing around 150,000 tests daily on average over the last week, according to the Covid Tracking Project. That’s far more than the nation’s testing capacity in mid-March, but researchers at Harvard University estimate that to reopen the US by the middle of May, daily tests would need to be closer to 500,000 to 700,000. Other experts argue millions of tests would need to be conducted each day.

That’s because controlling the pandemic relies on identifying people who have the virus, finding those they’ve come in contact with, and isolating them until they are no longer infectious. The only way to do that is to make testing widespread and readily available.

Without robust testing, it’s hard for officials and scientists to identify new outbreaks early, and to stop them before they balloon out of control. Testing shortages also make it difficult for any state easing its social distancing guidelines to track how relaxing these guidelines affects public health — something experts say is crucial to ensuring safety and to move the economy towards its normal state.

Ramping up testing will likely take a coordinated effort and innovative solutions, but ideas on how to get there vary between state and federal officials.

Different testing supplies, use of the Defense Production Act or a War Production Board are possible ways to meet demand

Speaking with NBC’s Chuck Todd Sunday, Govs. Mike DeWine (R-OH) and Gretchen Whitmer (D-MI) offered suggestions as to how the federal government could support them in ramping up testing.

DeWine pleaded with the Food and Drug Administration to make changes to the testing kit in order to ease a shortage of the materials necessary to run the tests — a problem multiple governors have cited as a challenge to ramping up capacity in their states.

“I could probably double, maybe even triple, testing in Ohio virtually overnight if the FDA would prioritize companies that are putting a slightly different formula together for the extraction reagent kit,” DeWine said, referring to a shortage of the chemicals needed to extract, amplify, and detect the virus in the samples collected from patients.

“If anybody in the FDA is watching,” DeWine added, “This would really take our capacity up literally overnight.”

Whitmer, on the other hand, argued a large, federally-coordinated effort will be necessary to help states meet the need for testing. She advocated for Trump using the Defense Production Act — a wartime-era law that allows the president to compel private companies to help produce needed supplies — to ramp up production of the reagents and swabs necessary to conduct tests.

“We have the capacity to double or triple the number of tests that we’re doing, but we need some of these supplies,” Whitmer said.

Trump has used the DPA sparingly during the coronavirus pandemic to compel some companies to produce more ventilators and protective masks. Many, including employees of the Federal Emergency Management Agency, have called upon him to increase use of the law to stimulate production of other needed supplies.

Based on their governors’ statements Sunday, it seems Michigan, Ohio, Virginia, and Maryland, at least, plan to err on the side of caution — which means citizens there may need to buckle up for a little longer in isolation.

Why organizers are fighting to center black trans lives right now
Third-degree murder charge dropped against former officer in George Floyd killing
This is worse than the crucifixion of Christ, and other GOP impeachment defenses
The odd, growing list of Covid-19 symptoms, explained
How conspiracy theories like QAnon spilled into the mainstream
Wonder Woman 1984 is a better rom-com than superhero movie