Trump says US Covid-19 deaths would be low if you excluded blue states. That’s wrong. 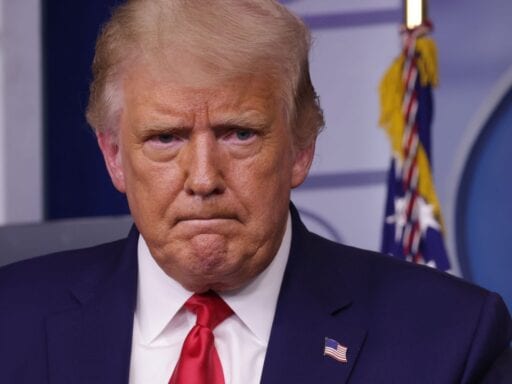 If red states were a country, they’d be in the top 10 for Covid-19 deaths among developed nations.

President Donald Trump on Wednesday suggested that if you excluded blue states, America’s Covid-19 death numbers would look much better. “If you take the blue states out, we’re at a level that I don’t think anybody in the world would be at,” he said at a White House press conference.

There are plenty of problems with this. It implies that the deaths of Americans who live in blue states don’t matter as much to Trump. It suggests that he doesn’t take any responsibility for deaths in the states that have a different political party in charge. And it’s generally absurd for Trump to act as though he’s not the president of the whole country.

But it’s also flatly false: When dividing states based on their 2016 votes for president, 11 of the top 20 states for Covid-19 deaths went for Trump. Overall, blue states fare worse with a death rate of 63 per 100,000 people, but red states still have a relatively high death rate, by global standards, of 40 per 100,000.

As a whole, the US is currently 11th worldwide and fifth among developed nations for Covid-19 deaths.

Individual states look even worse. If Republican-run Mississippi, with its Covid-19 death rate of 93 per 100,000, was a country, it would be in the top three globally, after San Marino and Peru. Democratic-run New Jersey and New York, with death rates of 181 and 168, respectively, would lead the entire world.

But the recent resurgence of Covid-19 hit red states hard too, unfortunately balancing the scales in this grim statistic.

Trump’s comments are just another way that he’s tried to shirk responsibility for America’s Covid-19 epidemic as the national death toll nears 200,000, effectively shifting the blame to Democratic leaders. Previously, Trump told journalist Bob Woodward, “The virus has nothing to do with me. It’s not my fault. … China let the damn virus out.” Trump later told Woodward, “Nothing more could have been done.”

The reality is much more could have been done, but the president blundered at every step of the way. As cases climbed in the US, Trump abdicated problems with testing to local, state, and private actors; pushed states to reopen way too early to supposedly “LIBERATE” their economies; spoke negatively about masks while refusing to wear one himself; and backed unproven and even dangerous approaches to treating Covid-19, including injecting bleach. Each of these failures compounded and led to the current US death toll — and local and state governments, as hard as some tried, simply don’t have the resources to fight a pandemic on their own as the federal government flails.

The result: While the US hasn’t seen the most coronavirus deaths of all wealthy nations, it’s in the bottom 20 percent for deaths among them since the pandemic began, and reports seven times the deaths as the median developed country. If the US had the same Covid-19 death rate as, say, Canada, 115,000 more Americans would likely be alive today.

That’s on Trump, no matter how much he tries to shift the blame to blue states, China, and everyone else.

Travel startup Away won’t be selling its luggage on Amazon anytime soon
Trump’s Afghanistan peace deal just hit its first major obstacle
Theresa May to UK: I know you’re tired of Brexit, but blame Parliament
Vox Sentences: A Band-Aid for a 35-day wound
Pete Buttigieg’s immigration plan rebukes Trump and calls for an overhaul of the system
A power struggle over Tripoli threatens to push Libya further into chaos