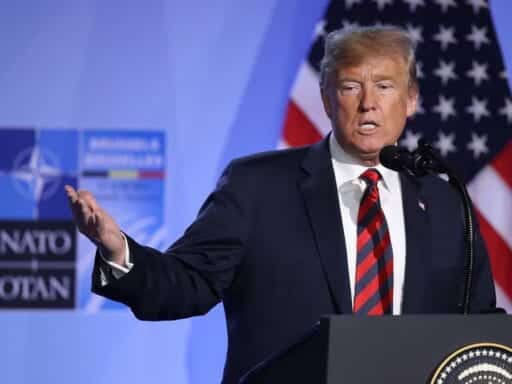 He doesn’t seem to grasp the importance of collective defense or even how it works.

Just a week after rattling NATO countries in Europe, President Donald Trump once again put America’s commitment to the alliance in doubt on Tuesday night.

In an interview with Fox News’s Tucker Carlson, Trump equivocated on whether or not the US would come to a NATO ally’s defense if attacked, called the people from Montenegro “very aggressive people,” and worried aloud that protecting Montenegro might unleash a third World War.

There were two key parts of the exchange. Here’s the first:

CARLSON: NATO was created chiefly to prevent the Russians from invading Western Europe. I don’t think you believe Western Europe’s at risk of being invaded by Russia right now, so what is the purpose of NATO right now?

TRUMP: Well, that was the purpose, and it’s okay. It’s fine, but they have to pay.

And here’s the second:

CARLSON: Membership in NATO obligates the members to defend any other member who has been attacked. So let’s say Montenegro, which joined last year, is attacked: Why should my son go to Montenegro to defend it from attack? Why is that?

TRUMP: I understand what you’re saying. I’ve asked the same question. Montenegro is a tiny country with very strong people.

CARLSON: Yeah, I’m not against it — or Albania.

TRUMP: No, by the way, they have very strong people — they have very aggressive people. They may get aggressive, and congratulations, you’re in World War III. Now I understand that — but that’s the way it was set up. Don’t forget, I just got here a little more than a year and a half ago. But I took over the conversation three or four days ago and said, “You have to pay.”

Trump says he’s bothered by provisions of NATO that require the US to come to the defense of other member countries. pic.twitter.com/2xY1FjBTSn

Carlson’s questions were entirely fair ones to ask (more on that in a minute). But Trump’s responses were deeply disturbing. Here’s why.

At the heart of the NATO military alliance is a provision known as Article 5. That says that an attack on one NATO country is to be considered an attack on all the countries — and therefore that all the member countries are obligated to come to the defense of whoever is attacked.

This is why NATO allies — yes, including Montenegro — are fighting alongside the US in Afghanistan to this day. The US invoked Article 5 after 9/11, and NATO countries kept their promise and came to America’s aid.

And, to use Tucker Carlson’s example, if a country were to attack Montenegro — which became a NATO ally in June 2017 under Trump’s watch — the US would be treaty-bound to defend it.

But Trump made it pretty clear that he’s not wild about that fact, and only begrudgingly said he’d go along with it as long as they pay their fair share of defense spending — an issue he brought up over and over again at the NATO summit in Brussels last week.

And this isn’t the first time Trump has done this, either. In May 2017, Trump refused to commit the US to Article 5 during a meeting with NATO allies. But two weeks later, Trump reversed course, saying in impromptu remarks that the US would abide by the provision.

Trump did seem to endorse NATO as a whole during Carlson’s interview when he said the alliance’s original purpose is still “okay.” Still, Trump’s outward skepticism about NATO worries many.

“His rhetoric has unsettled allies, empowered Russia, and undermined Alliance solidarity,” Amanda Sloat, a European security expert at the Brookings Institution in Washington, told me.

Trump said that if Montenegro got aggressive with another country, presumably Russia, then World War III would break out because the US would be obligated to defend it, thus dragging the US into a major war with Russia.

What Trump misses is that the US doesn’t have to defend Montenegro if that country starts a fight, only if it’s attacked. NATO is a defensive treaty. If you start an unprovoked war, that’s your decision, and no one in NATO has to help you at all.

So even if Montenegrins were, as Trump said, “very aggressive people” — whatever the hell that means — the US wouldn’t have to lift a finger to help them.

The fact that Trump doesn’t seem to understand that is beyond disturbing. If this were his first day in office, maybe it would be understandable. But it’s not. Trump has been in office for a year and a half. He’s met with NATO allies as a group not once but twice — including spending two days straight talking to them just a week ago.

There is no reason why he shouldn’t have that down pat at this point.

Carlson’s line of questioning was totally fair. It’s Trump’s responses that are the problem.

Debates about NATO’s usefulness have raged for decades, especially since the fall of the Soviet Union, as have concerns about NATO’s expansion over the years to include more and more countries. (There a really smart Twitter thread on that here if you’re interested.)

It’s certainly reasonable to ask the sitting US president to explain why America’s sons and daughters should be obligated to fight to protect Montenegro, or why the US should risk a potential nuclear war with Russia just to defend Estonia.

It’s Trump’s responses to this question that are concerning here. Instead of laying out the case for NATO being in America’s national security interest (and there is a case to be made on that), Trump makes it clear that he doesn’t actually get why the hell NATO matters at all.

If you’re a NATO ally wondering whether the US president will have your back if shit goes down, that’s not the most reassuring thing to hear.

The “heartbeat” bills that could ban almost all abortions, explained
Some brand names have long perpetuated racism. Black Lives Matter is changing that.
The emerging plan to save the American labor movement
The best-case and worst-case scenarios for Trump’s health care price transparency rule
Vox Sentences: Impeachment TV
Syria has confirmed its first cases of coronavirus. An outbreak there would be hell.